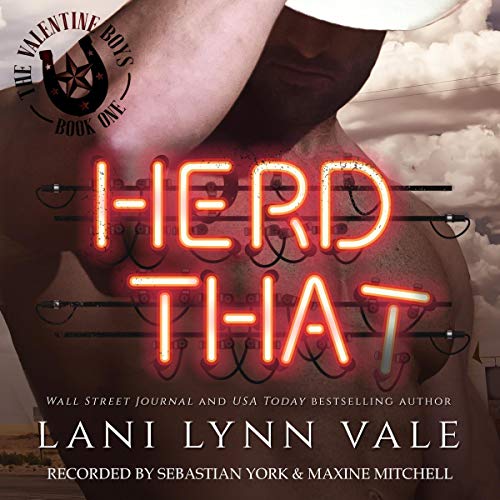 His Wranglers fit him like a glove. A really tight, leaving nothing to the imagination, glove. Codie wants nothing more than to shove that Wrangler-covered butt straight into the mud.

Ace Valentine has a smart mouth, a devil-may-care attitude, and those wicked eyes aimed directly at her.

She doesn't know what to do with that kind of attention. Especially not from the sweet-talking man that has no problem charming every woman that enters his orbit - everyone but her, at least.

Ace isn't sure why Codie Spears had her panties in a twist when it comes to him, but every snub and insult she hurls his way brings him closer and closer to falling for her.

He's not sure what it is about the town's bad girl that draws his attention, but every encounter they have leaves him wanting her until there's nothing else left to do but have her.

The only thing is, she's been convinced by everyone around her that she's not good enough. Tell a person that she's a piece of trash enough times, and eventually she'll start to believe it. It's going to take a lot of smooth-talking and gentling on his part to get her to see that she's worth it. And once he has her where he wants her? Well, she'll make a mighty fine rancher’s wife.

What listeners say about Herd That

This is first book I’ve listen to by Lani Lynn Vale but as soon as I noticed it was narrated by Sebastian York and Maxine Mitchell I had to listen to it.
Codie is a farm girl but has been away for a long time. When her grandfather becomes ill and she comes home to help him on farm she has to relive all her high school antics and bitchy cheerleaders.
Ace is the boy next door but in farm way. As soon as he meets Codie he can’t get enough.
I absolutely love that the relationship develops so well and is incredibly hot. I especially love the tight wranglers and sexy asses.
Can not beat theses two narrators.

Book 1 in Lani Lynn Vale series . This story from the author will grab your heart and keep you listening till the end . The author has strong characters that the hero went through a family tragedy, the heroine was a typical teenager a bit wild . They both moved away from the town . This story is about what happens when life bRings them back to the town and each other’s life .
Ace is the hero . Codie is the heroine.
Ace and Codie live next to each other , they both have a strong attraction to each other from their earlier days . An auction brought them together and little by little they were in each other’s life until they became one and the love shone through.
Grab this story and go through a heart touching story .

The performance of Sebastian York and Maxine Michelle was fantastic. You can never get enough of their voices . Their voices brought you right into the story

loved it. story has depth feelings and good story line. will read the other books

As a Texas girl, it’s really hard for me to listen to audiobooks. Either the author writes as if she’s never set foot in the Lone Star state or the narrators give bad southern accents. Lucky for you, this book is NOT the case. Authors has little nuggets throughout for Texas. (Love the Whataburger/Chick Fil A mentions). Maxine Mitchell and Sebastian York were incredible.

I usually hate cowboys but...

This was recommended to me by a whole group of people and I was not disappointed. This was a great story with some great characters. Both narrators were perfect and nothing over the top. I'm a huge fan of Sebastian York and will read anything he does, and this book was one of his best. Maxine Mitchell, someone I never listened to before, was amazing! I'm starting to like cowboys.

it was entertaining enough for me to finish, but I think mostly bc of the narrators. the story was kind of bland.

Loving this book from Texas

As a girl from a very small town in Texas (just 2hrs South of Kilgore) this books is EXACTLY what it's like to live in Texas. Author has it perfect from the sights, smells, and sounds around here to beloved businesses and how we dress. The one thing that I love that the author got nail on the head, is how petty stuff gets blown up and never forgiven in small town Texas. What you do in high school will brand you and never be forgiven. Growing up myself, my husband and having 4 kids in a small town this series is exactly how our life has been. The only wrong thing i found was you NEVER ride a yearling, noting you don't want to have a lame horse later down the road. I loved the easy flow of the story no dumb drama or overly dumb stubborn wpmen. Reading this series has saved my love for reading, because honestly every book I found was too drama filled. I wish there were more stories in the series, like maybe now write about their kids....just an idea. Anyway, y'all need to read this series.....seriously do!!!

I'd love my very own Ace Valentine. A sweet love story where good beats evil every time. Digging into book 2 and cannot wait for books 3, 4, 5. Narration by Maxine Mitchell & Sebastian York made me feel as if I was on the farm. Nothing but perfection.

Lani Lynn Vale books have earned her the 9 out 10 credits I've used. i love how every series seems to be connected and that if i moved to Kilgore, TX, I would recognize these Alpha men & bada$$ women if I ran into them on the street.

I definitely would Herd That!

Ahhh! Such a great story! I’m a sucker for cowboys and boy did this one fit the bill! Ace is smooth and ultra alpha and Codi was a take charge woman. Both with bad kid pasts have moved back to Kilgore to start new and ended up each other’s lifeline.
Sweet story and could have used more appearances of a few characters but i can’t wait for more of the Valentine brothers!

Sexy has a sensitive side.

Sexy has a sensitive side. Vale puts emotions in touch with a tempting love story that is shadowed by life long insecurities and heartaching bias. Herd That aims straight at the heart and scores a bulls-eye. Ace and Codie are fighting to live their own truth as their worlds are falling apart. The playboy with the soft heart and the wild child with the shattered soul are a wicked combination of naughty, nice and inspiring. For every heartache that brings forth a tear, there is a sense of strength that will make your emotions stand up and cheer.

Wow Wow I loved this so much. It had a little bit of everything. Full disclosure, I am a big LLV fan to start and this did not disappoint. I can't wait to get the rest of them on audio. There were mentions of characters from her other series which was a great treat. It has some sad back story of Ace but it added more depth to the story and character. Sebyo and Maxine Mitchell are some of my favs and did perfect! Highly recommend this book and all of LLV's other books/series.

if you are going to write about cowboys. research

Cowboys wear wranglers but never skin tight. if you have been riding for years you would know better thN rude an unfinished horse unless you have those skills. please do some research before you write about the Cowboy life. very poor job. Irritating voi e reading the book