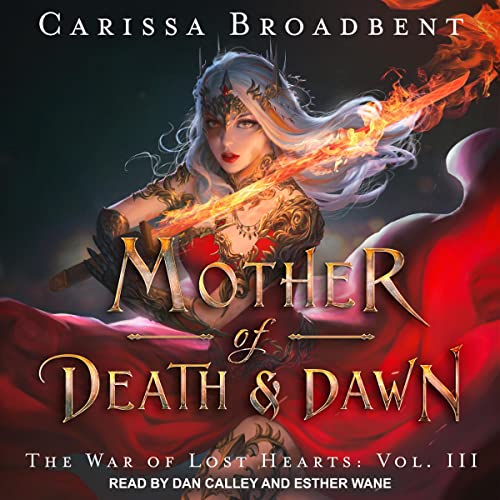 By: Carissa Broadbent
Narrated by: Dan Calley,Esther Wane
Try for £0.00

Tell me, little butterfly, what would you do for love?

In the wake of a crushing defeat, Tisaanah and Maxatarius have been ripped apart. Tisaanah is desperate to rescue Max from his imprisonment, even as her people's fight for freedom grows more treacherous. But within the walls of Ilyzath, Max's mind is a shadow of what it once was . . . leaving his past a mystery and his future at the mercy of Ara's new, ruthless queen.

Meanwhile, in the Fey lands, Aefe has been dragged back into this world by a king who vows to destroy civilizations in her name. But even as her past returns to claim her, her former self is a stranger.

Tisaanah, Max, and Aefe are thrust into the center of a cataclysm between the human and Fey worlds. The unique magic they share is key to either winning the war, or ending it.

But that power demands sacrifice. Tisaanah may be forced to choose between love and duty. Max cannot forge his future without confronting his past. And Aefe must decide between reclaiming who she was, or embracing who she has become.

The choices they make will either reshape this world forever . . . or end it.

What listeners say about Mother of Death & Dawn

This series is complete and I am so happy/sad/satisfied with the way it ended!!

Beautiful end to a story

Can’t wait for ashen son to come out so I can get more this amazing book series.

This kept my attention! Aside from the plot, having three POVs kept my mind engaged throughout the entire storyline.

This was EVERYTHING! I've never read anything like this series. There are no heroes, there are no villains, there are just people that have different reactions to the horrible things that happened to them. I will carry these characters in my heart forever and those of them that we lost in this story shall live on in me 🖤 I will miss them so very much. I will absolutely have to re-read this story so that I can visit them again.

Great End to an Amazing Series!

I listened to the trilogy consecutively and it’s such an amazing ride. I enjoyed getting to know the characters and watch them fall, rise and grow. Max and Tisaanah such a richly developed relationship. I’ll never get over it. Highly recommend this series!

I couldn't love this more

I just love everything there is to about this! The dual POV, the story, just...everything!!! I can't recommend it more!

This entire series was great- but this last book is a true gem. There were no villains, only people and their stories - all of which we are connected to. The characters and story are woven together so gracefully. I cried- yes cried, reading this book. Amazing. As good as “the name of the wind”

the ending was so satisfying 😭 I became so attached to many of the characters that I'd literally be yelling when something went wrong and cheering when Tazana would do something awesome! I don't know how I'll be able to move on to another book this was my favorite series!! I can't wait for what more stories you will tell us!

This was a satisfying end to a great series. I really enjoyed this book and how it ended