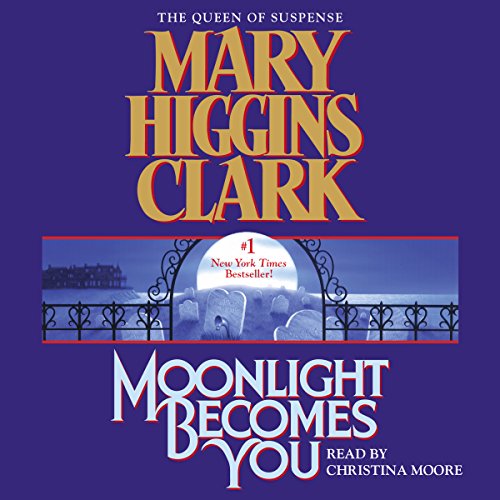 By: Mary Higgins Clark
Narrated by: Christina Moore
Try for £0.00

At a party in Manhattan, Maggie Holloway - one of the fashion world's most successful photographers - is thrilled to be reunited with her beloved stepmother. A widow now, Nuala Moore is equally delighted to see her long-lost stepdaughter and invites Maggie to spend a few weeks at her home in Newport, Rhode Island. But when Maggie arrives, she finds Nuala murdered, apparently by a burglar. Heartbroken, Maggie is stunned to learn she had inherited Nuala's stunning Victorian home... and horrified when she begins to suspect that Nuala's death was not random, but part of a diabolical plot conceived by a twisted mind.

When Nuala's dear old friend Greta Shipley dies suddenly of supoosedly natural causes, Maggie is convinced that there is a link between these two and other recent deaths among the older women of Newport. What she doesn't realize is that she has now become a target for the killer as well, and that each clue she uncovers brings her closer to an unimaginable fate.

In her most chillingly suspenseful novel yet, the queen of suspense delivers a tale of brilliantly sustained terror, woven with the skill and insight into human nature that have made all of Mary Higgins Clark's books major best sellers.

What listeners say about Moonlight Becomes You

One of her best!

I really loved this book! It was one of the most suspenseful that Clark has written in my opinion. After reading a lot of her books I’ve been able to predict some of the endings, but with this book I had no idea until the end.

My husband and I enjoyed listening to this book while we were driving on a road trip. It kept us engaged and entertained.

Too many characters for an audio book.

I. Love this author but too many characters to follow while I bike. Very disappointed.

Loved this book... the only thing is there are soooo many characters it's a bit hard to follow at times... I think this only applied to it being n audiobook, I'm sure it's easier with the physical book :)

Good Story, Hard to Listen To

The story was interesting and kept me guessing, but the narration grated on my nerves. I started it once before and stopped. I only finished it because I didn’t have anything left in my library to listen to and needed to keep my mind busy.

loved it to the end!!
kept me guessing, when I thought ne was guilty then realized I was wrong and had to re-guess.

Loved this book. MHC does it again. Narrator was wonderful. couldn't stop listening had to finish.

🌙 Moonlight was bright and shiny.

This is my all time favorite Mary Higgins Clark book! She got my attention right from the start!

Very Scary first chapter. The rest is slow and predictable . the reading is well done