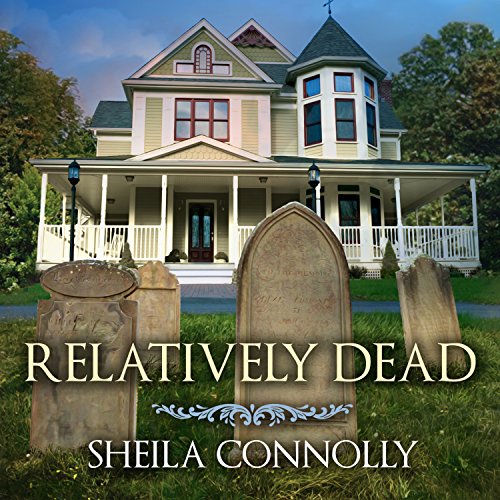 By: Sheila Connolly
Narrated by: Emily Durante
Try for £0.00

Abby Kimball has just moved to New England with her boyfriend and is trying to settle in, but the experience is proving to be quite unsettling, to say the least. While on a tour of local historic homes, Abby witnesses a family scene that leaves her gasping for breath - because the family has been dead for nearly a century. Another haunting episode follows, and another, until it seems to Abby that everything she touches is drawing her in, calling to her from the past.

Abby would doubt her sanity if it weren't for Ned Newhall, the kind and knowledgeable guide on that disturbing house tour. Rather than telling her she's hallucinating, Ned takes an interest in Abby's strange encounters and encourages her to figure out what's going on, starting with investigating the story of the family she saw and exploring her own past.

But as Abby begins to piece together a history that's as moving as it is shocking and unravels a long-ago mystery that nearly tore her family apart, she also begins to suspect that Ned's got secrets of his own and that his interest may be driven as much by a taste for romance as by a love for history.

What listeners say about Relatively Dead

Recap waaaay overdone. Narrator mispronounced/mis-stressed words disconcertingly, especially the overused name of the town. The plot was pointless. I kept going to find the why, but there wasn't one.

This could be a good book--but misses the mark

What is good: the author seems knows the area she is writing about and has an interesting idea for a story.

What needs help: The story goes nowhere. at the end you are no further into the tale then you are at the beginning---she has a new boyfriend and moved but the story hasn't progressed. You need to sit down and focus on your story line--outline the progress you want to make in each book. Personally--after hooking up with the understanding boyfriend I would have shown an advancement in her specter ability. Let them come to her now or let her hear what they are saying. Let her find out a relative contacted and talked to the dead. You just don't give us enough; the ending was a flop with no promise of more. Do a rewrite--boost your story--focus on whats important--we need more advancement before the end of the story and a promise of something in the next book (following the main story line). Remember the specter ability is you main action line---relationships are a added secondary development.
I wish you well and would like to see this story again after a rewrite

whine whine whine ...i couldn't finish the book.
the main character is needy and annoying. slow read
i don't recommend

Not really a mystery

I feel this book was predictable and it was much more of a romance than a mystery novel. I simply don't like romances.

a bit of boredom, sorry!

This book is okay until the ending... What A let down. Save your money and time. Don't buy it.

Boring, I thought it would be a cozy mystery but no such luck. The main character was not inspiring and within the first 10 minutes I was bored.

I really liked the story and where it was going, but I felt cheated at the end. It was almost as if they had taken one overly long book and just chopped it in half. very disappointed in this venture by Ms Connelly.

I usually enjoy Ms. Connolly's books, especially the Cork County series. However I could not connect to the helplessly passive Abby, who moved to Massachusetts with her self-absorbed boyfriend. Since I didn't care what happened to her, I never became engrossed with any of the characters or the plot, which was basically just about creating her family tree.

I've had this audiobook in my library for a while. I think due to some negative reviews I kept avoiding it. Glad I finally dove into this new (for me) series. Sheila Connolly has written a cozy mystery with a very new idea for a paranormal series. The characters are developing nicely and very likable. Emily Durante gives a nice performance, bringing the characters to life. I have downloaded the next in the series and am quite optimistic.