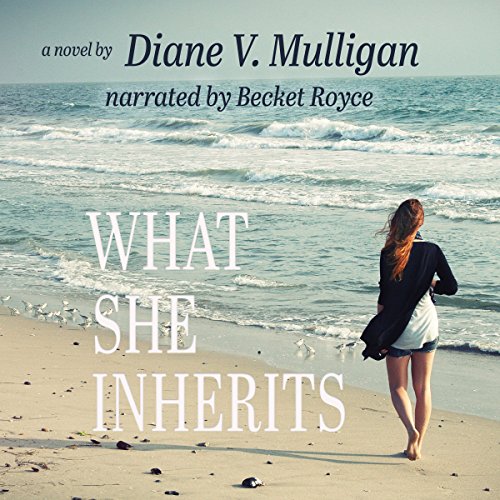 By: Diane V. Mulligan
Narrated by: Becket Royce
Try for £0.00

When Angela Ellis returns to her childhood home on St. Nabor Island, South Carolina, her junior year of college interrupted indefinitely by her mother's death, she doesn't know how she'll ever be able to function in the world without her mother's love, support, and guidance. Soon after her mother's funeral, strange sounds begin to trouble her in the night, sounds she swears are her mother's angry voice. In an effort to find peace for herself and for her mother's restless spirit, Angela begins a ghost hunt that makes her friends fear for her sanity and that leads her to more questions than answers. Her parents, it turns out, were extraordinary secret keepers, and now Angela is on her own to discover the truth.

One thousand miles away on Devil's Back Island, Casey Seaver has built a sweet life for herself hidden away from the rest of the world in Maine's Casco Bay. She runs a small café and keeps to herself, rarely visiting the mainland. When a posthumous letter arrives from her estranged mother, old memories and new problems interrupt her island idyll. For 20 years she has been trying to forget the mistakes and injustices of her youth, and she has nearly convinced herself she has succeeded, but her mother's words shatter that illusion. As she tries ignore her mother's dying wishes, a stranger arrives on the island, looking to bring Devil's Back into the 21st century at last. If he has his way, Casey's island haven will be a refuge no more.

As plans for a new resort on Devil's Back spur Casey to move her life forward, Angela's ghost investigation forces her to examine the past. Fate has put their lives on a collision course, and through each other, they will find the way through their grief.

What listeners say about What She Inherits

I really enjoyed this narrators tone and pace. She did an amazing job on this story.

Since my original review disappeared I cannot recall all of the details of this book as I've listened to and read more books since. What I do recall is that mother and daughter are reunited through a paranormal connection. I was provided this audiobook at no charge by the author, publisher and/or narrator in exchange for an unbiased review via Audiobook Boom.

Confusing Until the end

Made sure the reader understood that there were two stories being told. When the stories switched the titles or something should tell me that I am going to the other story.

I enjoyed the ending but most times I was confused as to why the two stories were intertwined. Especially when I had to stop listening then when I returned I was not sure which story I was listening to. I got this book via audiobook boom.

The author and narrator were new to me. This is a very well written story that is Women's Fiction and some Romance with the mention of ghosts. The premise of the book was complex which intrigued me. Parts of the story moved fast while others were slow. I have been listening to mystery and thriller books lately, so this wasn't as gripping as I was expecting. Overall, I thought it was very good and would listen to more by both the author and narrator. I was voluntarily provided this review copy audiobook at no charge by the author, narrator, and/or publisher.

What a delightful read while out on my walks or cleaning house! I felt I was present with all these characters and loved them all!❤️

Angela is forced to leave collage and return home upon the death of her mother. Her father is in a nursing home and cannot remember her. As she begins dealing with her mother's estate she begins to hear foot steps and to hear her mother's voice.

While 37 year on Casey lives in Maine with her Great Aunt. Trying to disassociate with the world.

Gradually through Angela's research of her family, events lead them to discover each others existence.

Great book. I enjoyed both the storyline and the narration and recommend both to all.

I was provided a free audio version of this book in exchange for an honest review.

Good story - well written and we'll spoken. Ghosts, love interests, and taking control of one's life - what's not to like

Two simultaneous stories eventually come together, becoming intertwined by a series of shocking twists and turns. Sometimes ghosts aren't the only things that haunt us. What She Inherits was a great listen and very entertaining. I would recommend this audiobook.

I was voluntarily provided this review copy audiobook at no charge by the author, publisher and/or narrator. This review is my honest opinion.

The story is of the things we do that forever haunt us. Decisions we make when we are young that change us. And families that are dysfunctional and yet are all we want. Perfect yet have hidden secrets. There is a little for everyone. Maybe predictable to some yet still worth the time to read. I received this book at no charge in exchange for an honest review.

Inheritance from a Mother's heart

Where does What She Inherits rank among all the audiobooks you’ve listened to so far?

This book rates in the top 25 I have read in this genre.

Casey with all her quirks was my favorite.

I enjoyed everything and all Beckett's characters as she brought each to life off the page.

This women’s romance/fiction book began as two parallel stories. The reader meets Casey who runs a bakery on the quaint Devil’s Back Island on the North-Eastern coast. Angela returns home to St. Nabor Island off the South Carolina Coast following her mother’s death. Neither seems to have a common thread with the other.
As Angela begins to sort through her mother’ affairs she begins to believe that she is haunted by her Mother’s unsettled ghost. Answers lead to more questions.
Each woman’s story unfolds and keeps the reader interested to learn what happens next and wondering how the two stories come together. This is a lovely story telling how decisions can become clouded ad truths come to light. It will keep you interested until the end.
“I was voluntarily provided this free review copy audiobook by the author, narrator, or publisher.”

I have to admit, when I started this book I just wasn't sure. I was underwhelmed by the narration and the first few paragraphs. Typically if I'm not entranced by the first sentence I find myself drifting through the entire book, only half listening. By Chapter 3 I realized I was eager for any opportunity to push play. It didn't take long for me to fall comfortably into these characters.

I was pleasantly surprised by the 'surprise' connection of the characters and the parallel stories in this book. I was a bit disappointed in myself that I didn't figure out the connection sooner. I'm usually not surprised by your typical twists and have figured it out long before the author confirms my suspicions. This one kept me curious and I realized the twist was coming about 5 minutes before the author dropped the final clues. Well done!

Narration, while not initially impressive, easily became the perfect flow, voice and tone for these characters. Becket Royce brought these characters to life for me and I couldn't imagine Casey, Rosetta or Angela any other way.

Overall, well done. I will re-read.

I was voluntarily provided this review copy audiobook at no charge by the author, publisher and/or narrator. This did not impact my review in any way.