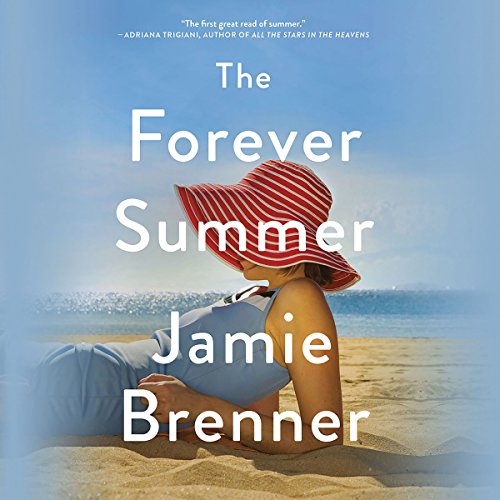 By: Jamie Brenner
Narrated by: Amy McFadden
Try for £0.00

The discovery of long-buried secrets brings three generations of women together to Cape Cod for the summer homecoming of a lifetime.

Marin Bishop has always played by the rules, and it's paid off: On the cusp of 30, she has a handsome fiancé, a prestigious Manhattan legal career, and her father's hard-won admiration. But with one careless mistake at work, Marin suddenly finds herself unemployed and alone. Before she can summon the courage to tell her parents, a young woman appears, claiming to be Marin's half sister. Seeking answers, Marin agrees to join her on a soul-searching journey to Cape Cod, to meet the family she didn't even know she had.

As the summer unfolds at her grandmother's beachside B and B, it becomes clear that her half sister's existence is just the first in a series of truths that will shake Marin's beliefs - in love and in her own identity - to the core. Filled with shocking revelations, heartfelt romance, and resilient women banding together against the most unexpected twists of fate, The Forever Summer is an emotionally resonant story and a delicious escape for any season.

"An engaging and emotional read with characters who stay with you, this is a good fit for fans of Elin Hilderbrand, beach reads, and women's stories." ( Booklist)
"Just when Marin's engagement and career start unraveling, an at-home genetic test confuses things even more - and clues her in to a family she never knew she had." ( Cosmopolitan)
"Soap-opera twists and turns are tempered with the believable goodness of the characters, the messiness of their journeys, and just a hint of unpredictability as events unfold.... Engaging and not too fluffy, an excellent choice for summer vacation reading." ( Kirkus Review)

What listeners say about The Forever Summer

Two young women discover they are half sisters after checking with DNA service. They travel to meet their mutual grandmother and discover that their father was estranged from her after he discovered her in an affair with his love interest.

The storyline was strange and the characters were not likable. Wasted a credit.

Well written and pleasant narration....I liked all the characters and story lines. Kept me listening to the very end. I'm hoping there's a sequel!

I liked this book a lot. It was easy to listen to and not too sappy or heavy but just kept you interested. Great beach read.

Take This One To The Beach

As we all get more involved with instant communications, it gets harder for authors to get a good conflict going in a contemporary setting since theoretically, any character could get in touch with or find another person/character at just about any time. This book deals with a lot of travel and long distances -- both emotionally and geographically -- so Jamie Brenner could have easily dropped the tension in several plot lines by just giving into a Skype scene or a mobile phone ringing. But she doesn't and the book works.

So I give Jamie Brenner kudos for getting a good plot going. (And for incorporating into the plot and believably utilizing tech contrivances, for that matter.) She also outlines very real characters.

The novel uses intrigues involving genetics and ancestry and what a "family" can be, depending on your definition.. not a new idea but this story is well fleshed out.

A GREAT beach read. Not too heavy and has several layers of romance to keep you going.

I wish when authors write about cape cod and the towns on cape cod that they actually spend time here to know how to speak.
1. Cape Cod is NOT AN ISLAND.
2. Provincetown is NOT an island
3. You go to the cape or you are on the cape NOT IN CAPE COD
4. "Fran turned right around from cape cod and headed back to province town". SERIOUSLY Look at a map. P-town is a town ON CAPE COD PART OF CAPE COD - Maybe she turned around from Chatham or Hyannis or even Falmouth ... that would have been correct !!

Story was enjoyable other than every time they spoke of the "island" I cringed.

I found it hard to get into this book even as light bedtime reading. Characters were flat

The narrator made it something special

I listened / read this book with Whispersync, and it was the excellent narration that made this rather predictable chick lit worth the listen. Amy McFadden was great ! The story and characters, as indicted, are fairly standard chick lit fare, but, het, sometimes that's not a bad thing. This is a good book when you're in the mood for family drama with a garenteed HEA.

Very enjoyable read about love, family and the difficulties that come along the way.

I usually don’t write reviews, but I really wanted to after listening to this book. The story continued along nicely and was very relatable. I enjoyed the characters and the plot of the story along with the ending. This was my first by this author and I look forward to more.

sweet and a little predictable

Yes, there were a few surprises, but it was pure escape. just what I wanted.

I loved it! I can not wait to read the next book of hers. This was my 3rd!