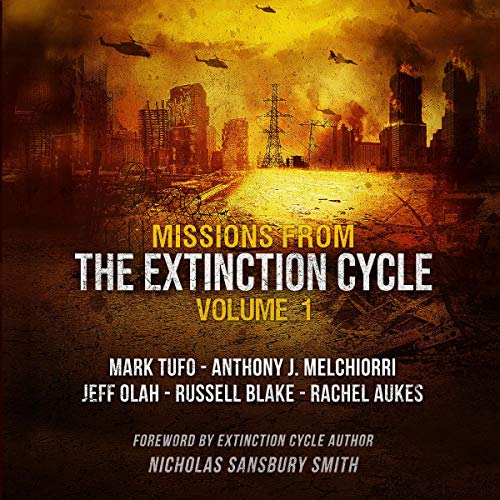 Missions from the Extinction Cycle, Vol. 1

The best-selling Extinction Cycle series by Nicholas Sansbury Smith first introduced listeners to a world ravaged by an engineered virus that turned men into monsters. Billions died, civilization collapsed, and the human race teetered on the brink of extinction. Humanity's only hope was not a cure, but another bioweapon. When deployed, it killed 90 percent of the infected, but the remaining 10 percent transformed into even more terrifying creatures called Variants.

Heroes have risen up to meet these abominations. Men like Master Sergeant Reed Beckham of Delta Force Team Ghost and Marine Corporal Joe Fitzpatrick. Women like Dr. Kate Lovato and firefighter Meg Pratt. Throughout the world, survivors band together to fight the evolving monsters in an effort to save humanity.

Now, for the first time ever, comes a collection of Extinction Cycle short stories that explore the human spirit and the fight for survival in the face of overwhelming odds from some of the leading voices in the post-apocalyptic genre.

What listeners say about Missions from the Extinction Cycle, Vol. 1

A great collection that adds to this amazing series. great writers and stories to keep the action going!

Ok to be honest got this for Mark Tufo section but all the stories were very good all 5 stars Mark of course gets 6 stars but if you like the extinction cycle series this is really good. I was gripped all the way through, sorry there was a cheer when Marks story came on but honestly they were all good and well worth downloading as soon as you can.

the attention to detail is superd. I could not stop listening. A truly gripping novel. I just loved the switch from human to variant.

To have a few of my favorite authors in one place was awesome! I loved this book!! I was engaged from the moment I started listening and could not put the book down! It left me wanting more!!

Fantastic look into how it played out

All it takes is all you got!

Loved these stories. I was really excited to listen to them after reading the kindle versions. Bronson Pinchot does a great job bringing them to life. My favorite had to be Darkness Evolved but I'm also a big fan of Anthony Melchiorri. Check this collection out for a great price and strap in!

Doesn't get much better than this!

Five fabulous stories in one terrific, heart-pounding anthology. I devoured these spin-offs of the popular Extinction Cycle Series. Each author has his/her own twist on the Variant apocalypse and every story is a total delight to read. If you are a fan of the post apocalyptic genre, grab this jewel ASAP.

Well worth the credit!

Excellent collection of stories! My favorite is the Bone Collector by Jeff Olah. Man, Bronson really brought it to life! Great stuff! There are so many other good stories too and for the value of one credit this is an instant click for me.

Was so glad my favorite author, Mark Tufo, took part in this! But please tell me my favorite narrator, Sean Runnette is going to re-do the narration! Michael Talbot sounded like a woman. Was difficult for me to listen.

Wonderful addition to the series.

Wonderful addition to the series. I enjoyed every minute. Narration was great. Stories were great. I highly recommend.

Some have it, others don't

Re Missions: well, it's definitely not on par with the series. Two stories are, however, certainly worth a listen.

The first story is ok. It's suspenseful and there's plenty of action. The plot and writing are mediocre, but Bronson's narration is unforgivable.

The second story is awful. There's no suspense, no action, a weak plot, poor writing, and the narration is cringeworthy. Skip it.

The third story is quite good. The beginning lags a bit, but once it starts getting creepy it stays creepy and gets creepier. Also, Bronson's humdrum narration is better suited for this story.

The fourth story is fantastic; it makes ploughing through the first three worth the wait. Rachel Aukes is a talented, noteworthy writer. And she's clearly a genuine fan of the EC series. Great job indeed. Bronson's humdrum narration compliments this story well too.

Missions ain't a masterpiece, but it ain't a wasted credit. Overall, recommended for die hard fans of the EC series.

Excellent addition to the whole series!

This is such a cool series of stories. The Extinction cycle is my absolute favorite series of books from Nicholas Sansbury Smith. It's one of the first series I've read from him and it is so well written, so immersive, so full of action, content that you literally are engrossed the entire time you read them. These side stories written by incredibly talented authors adds a different view of the whole cycle. I love this, it's such a cool way to expand the entire world that the series portrays. The writing is spot on in all of these. When they did this as a Kindle World bit it was amazing but to have some of them in one book.... awesome. And for the price? An absolute steal. And Bronson Pinchot is FABULOUS reading these.

all the voices were great except Mark Talbot. it was too high and formal. exciting