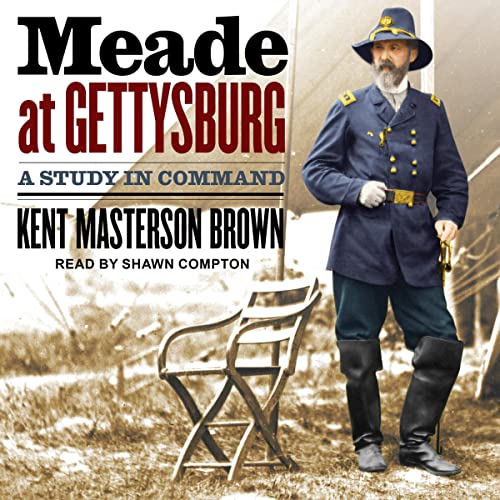 By: Kent Masterson Brown
Narrated by: Shawn Compton
Try for £0.00

Although he took command of the Army of the Potomac only three days before the first shots were fired at Gettysburg, Union general George G. Meade guided his forces to victory in the Civil War's most pivotal battle. Commentators often dismiss Meade when discussing the great leaders of the Civil War. But in this long-anticipated book, Kent Masterson Brown draws on an expansive archive to reappraise Meade's leadership during the Battle of Gettysburg. Using Meade's published and unpublished papers along with a variety of other sources, Brown highlights how Meade's rapid advance of the army to Gettysburg on July 1, his tactical control and coordination of the army in the desperate fighting on July 2, and his determination to hold his positions on July 3 insured victory.

Brown argues that supply deficiencies, brought about by the army's unexpected need to advance to Gettysburg, were crippling. In spite of that, Meade pursued Lee's retreating army rapidly, and his decision not to blindly attack Lee's formidable defenses near Williamsport on July 13 was entirely correct in spite of subsequent harsh criticism. Combining compelling narrative with incisive analysis, this finely rendered work deepens our understanding of the Army of the Potomac as well as the machinations of the Gettysburg Campaign, restoring Meade to his rightful place in the Gettysburg narrative.

What listeners say about Meade at Gettysburg

This is a fantastic, and much needed, evaluation of George Meade during the Gettysburg Campaign. Kent Masterson Brown clearly spent a lot of time in researching material for this book. Though Meade is the winner of the battle, he has been largely ignored by Civil War scholars, and is greatly undervalued/studied even by Gettysburg scholars. This is a must read for students of the battle.

I confess this is the first audio book that I have ever listened to. That being said, if the narrations continue in this vein I am not sure how many more I will do. Thankfully the text is wonderfully written, otherwise this would be a total dud. There is no enthusiasm in the narrators voice. That could be excused, what cannot is the gross mispronunciation of basic militarily terms (eg. corps) and elementary Civil War names (eg. Heth).

Everything about this book was excellent, except for the minor point that some seemingly well known names/words were mispronounced.

This book admirably makes its case that Meade’s generalship at Gettysburg was excellent and that he was justified in not attacking Lee’s strongly fortified lines before Lee’s army retreated over the Potomac. As to the latter Lee was effectively dug in and the numbers of the two armies were almost equal. While the author did not discuss Grant, Grant later always had superior numbers allowing him to be aggressive. The battle scenes at Gettysburg are from Meade’s perspective and so are intentionally not complete.

Wonderfully written analysis of Meade’s contributions for the Union at Gettysburg. A new look at some of the reasons for Meade’s decisions after the Battle of Gettysburg. If you like history, especially Civil War history, then you will not be disappointed in this book.

Tries to bury Pfanz and Coddington very early on. Same old story Hancock vs Howard, Meade was all about his pipe creek line and ignorant of Gettysburg etc etc. ignores most of the major breakthroughs of the modern era on the battle history wise. I would recommend the author look closer at works by James Hessler, Wayne Mott and Tim Smith. I could not get through the final seven hours. My eyes were rolling out of my head.

From the General’s POV

An excellent analysis of the battle of Gettysburg from the Union Side . This book was strong because it stuck to its topic. A lot of civil war battle books are simply a stringing together of good ole boy stories with a loose overall narrative. Not this work , it sticks to Meade and his POV . The pre and post battle were covered with new (2021) well researched insights . I especially liked the research into the supply of the army of the Potomac and Meads’ strategy going into Gettysburg .

If you are a big fan of the genre you will also find fascinating the author directly calling out some prominent civil war writers on poor Gettysburg and Meade research .

For every two pieces of interesting information, you have to wade through eight pieces of minutia. I kept thinking it would get better, but it did not and I quit half way through.

Absolutely thorough in explaining the circumstances and actions of General Meade. I learned a great deal about the tactical problems and the conditions of the Army of the Potomac in this comprehensive and well told narrative.

A Totally New Understanding of Gettysburg

The author writes the history in the tone of a novel which keeps the reader’s interest level high. He writes the story of the battle from the point of view of General Meade who has to be the most misunderstood figure of the Civil War. There are new interpretations based on evidence and logic. I particularly liked the later part of the book that deals extensively with the days after the battle. The author showed that the Union army was actually in worse shape than the Confederate army and Lee occupied the high ground on the retreat back to Virginia. Really good material and insight. The narrator did an outstanding job. If you want to learn something really knew about Gettysburg, this is your book.

Great book, not so great narration

This is a must read for any student of Gettysburg or the civil war in general! It definitely fills in a gap by taking a much needed and objective look at Meade and his generalship both during the battle and the campaign in general. While the narrator had a very good tone and pace his pronunciation of names was at times quite bad!

An interesting study in command...

of Meade. The narration was mediocre and he mispronounced many names and places which was distracting. A better narrator would have improved the listening experience.