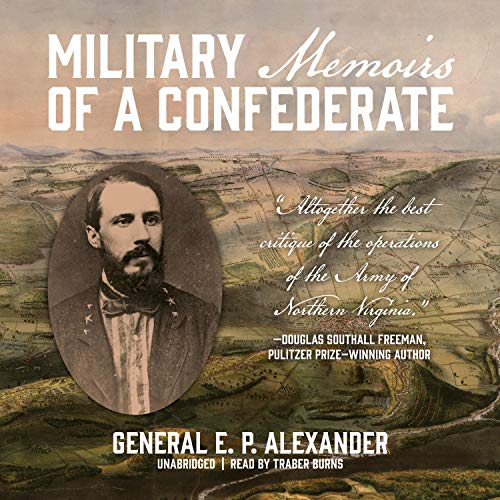 Military Memoirs of a Confederate

By: Edward Porter Alexander
Narrated by: Traber Burns
Try for £0.00

Unlike some other Confederate memoirists, General Edward Porter Alexander objectively evaluated and criticized prominent Confederate officers, including Robert E. Lee. The result is a clear-eyed assessment of the bloody conflict that divided but subsequently united the nation.

The memoir starts with Alexander heading to Utah to suppress the hostility of Mormons who had refused to establish a municipal government approved by President Buchanan. Only a few years later, Alexander found himself on the opposite side of a much larger rebellion of Confederates wanting to secede from the Union. In the years that follow, he is involved in most major battles including Manassas, Antietam, Chancellorsville, Gettysburg, and Chickamauga.

Alexander describes each battle and battlefield with a keen eye for detail. Few wartime narratives offer such insight and critical perspective as Alexander’s memoir.

What listeners say about Military Memoirs of a Confederate

The first one I may exchange

I am a civil war nerd. And it’s hard to criticize memoirs or field reports. They are what they are. But this book gets insufferable for me because so much of it is a recitation of casualty reports by division etc. I love the fact that he honors the men in this way. But listening to it is tough. Especially after the first few battles.

His insights are the gold nuggets. I wish there was more of that. But they get drowned out in casualty reports. At least for me. I can’t ever see reading this again, unlike the many others I’ve gotten from Audible.

Thousand does not end with a “T”

Generally a good read. While Alexander is a confederate, he does a good job of critiquing the actions of both sides fairly.

As for the presentation, it was good but, as the article headline addresses, the word is “thousand” not “thousant”. If the word only occurs a few times, I could overlook the mispronunciation, but it is repeated many many times and is quite a distraction.