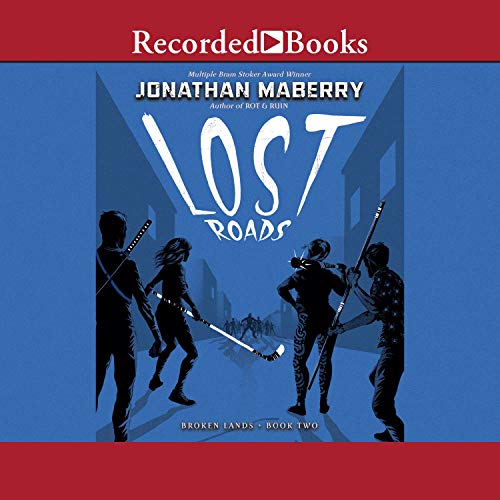 By: Jonathan Maberry
Narrated by: Ray Porter
Try for £0.00

Gutsy and her friends, along with Benny and his crew, have just survived a massive attack on New Alamo by the Night Army - a mix of mindless shambling los muertos and sentient half-zombie ravagers. She's also reeling from the revelation that the residents of her town were the lab rats of the biological testing facility linked to creating the most dangerous zom, the Raggedy Man, who controls all of the living dead.

And the first raid was only a test. The real Night Army is coming, and this time, it'll be a handful of survivors against seven billion zombies.

What listeners say about Lost Roads

Maberry does it again

Another great installment in the Benny and Joe Saga.
A must for any Maberry fan with the added bonus of Ray Porter

Perfect completion of the series

if you're a fan of Maberry but you have only dove in to the Rot and Ruin series you really should take a deep breath and dedicate the next year or so on reading everything else he's written. Start with Patient Zero and meet Joe Ledger before he was even in Echo Team... read through the whole series and learn who Joe is, who his team is, why they do what they do and why they're the best there are... don't miss the collections if short stories and other side books and be happy because there are many more stories to be told there... somewhere as you're working through this, if you need a slight change, pick up Dead of Night... the first of four books in that chain and read about First Night and the people of Stebbins who tried to stop it... about the king of the Dead and the crazy but all too possible way the pandemic spread... follow that series as it progresses into the first year or two following the fall... you'll see a few friends along the way through there... then go back and start Rot and Ruin over from the first page and read through it all... again, don't miss the side stories... bits and pieces and, if you can get a copy, warrior smart (graphic novel side story of Benny and the crew)... take a breath and then move on and read Broken Lands again... finally one more read through Lost Roads... the absolute perfection of the interwoven tale that takes place across decades and ties all together and comes to the most perfect ending is nothing short of a masterpiece.

and when you're done with all that... go find the Pine Deep series and the V-wars serries and enjoy the hell out of those as well...

thank you Mr Maberry for each word you write to help get us through each day.

So bummed that this is the last one

I could read about these kids forever. I love them. they are well written and just amazing. If this had to be the last book in glad it is. The farewell is so gently done.

A disappointing end to a good series

Lost Roads is not terrible. If you just want to turn off your brain, it's fine - Maberry is a master of thoughtful and descriptive writing. However when compared to the rest of the Rot and Ruin series it just does not hold up. Ultimately the book does not really have a narrative of its own and just serves to tie up loose plot points from the rest of the series.


It starts off fine, but as the book progresses it becomes clear that he (Maberry) didn't really have a story in mind, only plot points he wanted to resolve. He needed to resolve the existence of the primary antagonist, conclude the arcs for every character, etc., yet how he gets to those conclusions boils down to "lots of filler and then it just happens". For example there's a whole D plot about the primary antagonist and a few underlings, IE. they get developed through flashbacks so they're 100% one-dimensional characters. However beacuse none of the protagonist characters (except Maberry's darling Joe Ledger) have any knowledge of this information and the antagonists motives, the antagonist's presence in the actual story is basically "he shows up, gets angry, and then loses to the protagonists." I honestly couldn't have cared less about his threat, and the story would have basically been then the same without him.

This is not an isolated issue. From Riot and Morgie just wandering until their plot line concludes (never actually doing anything significant to affect the plot other than a last minute shoehorn) to Joe and Sam apparently going on an epic fight with a secondary antagonist that just gets resolved off-scene, there's so many odd narrative choices throughout the book. The conclusion is just a slide show of the survivors getting told which characters didn't make it after their demise. It's boring, easily correctable, and seems uncharacteristic given Maberry's writing skill.


Ultimately as my title states, this book is disappointing. It was probably rushed to meet some publishing deadline and it shows, which is a disservice to the overall exceptional series as a whole. You may enjoy parts of it, but you're probably never going to enjoy it as much as the rest of the series.

I might have enjoyed the story if I'd been able to get the prior book. I couldn't get into the characters as the prior book in this series is unavailable at this time on Audible. Returning this!

as always jonathan and ray work magic. this series is not just for teens. many old friends turn up, and it's nice to see how they are doing

No happy endings, but an ending

I first read this book in middle school, starting with dust and decay before reading the Rot and ruin. I'm glad this story wrapped up, I'm sad it didn't wrap up with a pretty bow.. Honestly was expecting specific characters to die but got the total opposite.. Two of which I felt, though they weren't major, it still hurt..

Guess now I move onto the Joe ledger books, though I will forever miss the Benny imura gang.

Gutsy and the Gang

Jonathan Maberry never ceases to deliver compelling stories with immersive writing. Great addition to the saga of Gutsy and her friends. I'm an avid Joe Ledger fan and appreciated how in this book he is handing a bit of the baton to Gutsy to step into her leadership role. This book balances a lot of action scenes with deep character examination. Thank you to Maberry and the always phenomenal Ray Porter for transporting me into the wastelands.

It was an awesome 2 books, bring Joe and Sam together, and ill the kids. The story was well written and always kept immersed.

So I’ve read all of these books. To say they are “young adult” is a misnomer. They are all brilliantly composed and brilliantly read. Yes, it’s about kids. But it’s more than that. Adventure, fighting, life and death and yes love. Plus we have a few great dogs to enjoy and Mr Ledger and crew in the background. Speaking of backgrounds there is a backstory that ties in with Joe and the team that travels through the years. It’s so well done. Except that I want more! More of Joe (of course) his in between years. We can’t get much more of the kids but their story could move forward. Mr Mayberry. Make it so, please. Some more young Joe, spec ops Joe, Joe and HIS family (so tantalizing) and following him through other eyes like Lost Roads. And if Ray doesn’t narrate them all? I will curse you. Not a demonic curse, or a witch curse but I will figure out something.

Another Great Book and Narrator

Jonathan Maberry does it again. Great story for young and mature listeners! Gutsy, Benny and of course Joe Ledger!!! Great plot suspenseful and lots of action to keep you riveted. Thank you for continuing the story.