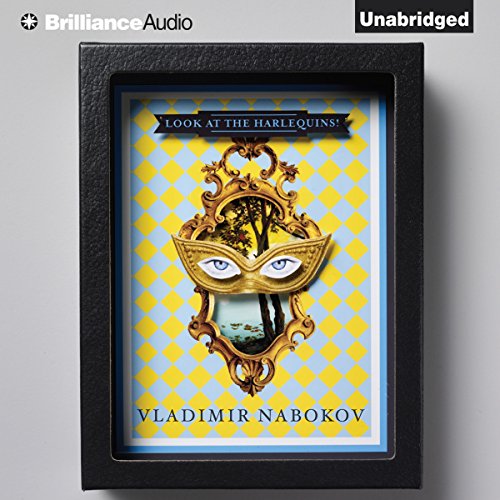 Look at the Harlequins!

By: Vladimir Nabokov
Narrated by: Stefan Rudnicki
Try for £0.00

As intricate as a house of mirrors, Nabokov’s last novel is an ironic play on the Janus-like relationship between fiction and reality. It is the autobiography of the eminent Russian-American author Vadim Vadimovich N. (b. 1899), whose life bears an uncanny resemblance to that of Vladimir Vladimirovich Nabokov, though the two are not to be confused (?).

Focusing on the central figures of his life - his four wives, his books, and his muse, Dementia - the book leads us to suspect that the fictions Vadim has created as an author have crossed the line between his life’s work and his life itself, as the worlds of reality and literary invention grow increasingly indistinguishable.

One of the 20th century’s master prose stylists, Vladimir Nabokov was born in St. Petersburg in 1899. He studied French and Russian literature at Trinity College, Cambridge, then lived in Berlin and Paris, where he launched a brilliant literary career. In 1940 he moved to the United States and achieved renown as a novelist, poet, critic, and translator. He taught literature at Wellesley, Stanford, Cornell, and Harvard. In 1961 he moved to Montreux, Switzerland, where he died in 1977.

“One of the greatest masters of prose since Conrad.” ( Harper’s)

What listeners say about Look at the Harlequins!

How ironic, that I write a five paragraph review of 'Look at the Harlequins!' and with a careless sideways swipe of my too smooth mouse lose it all. Now I have to climb out of a self-made despair and mentally turn around and try and recreate the review I JUST wrote. So a warning, this review might contain a few similarities to my real/original review, but any thing I say, any words I now write will just be shadows and mouches volantes of my first try.

Nabokov's false memoir is loose, brazen and genius all at the same time. It is a false 'Speak, Memory', a greedy parody and doppelgängers of his own past. Vladimir, through Vadim, shows us how impossible it is to stop, turn around and recreate, or recapture the past. Even setting the past down on paper is no good. It is all fleeting whispers and harlequins.

Reading this novel, I was taken suddenly with the thought (almost certainly not original) that Nabokov's obsession with doubles, refractions, twins and doppelgängers comes from the split with him. There exists with Nabokov the Russian гений (Despair, the Gift, King, Queen, Knave) and the English genius (Lolita, Pale Fire, Ada). That ability to exist at such a high level in two different literary worlds is beyond simply amazing. Nabokov wasn't just dancing on a spinning chessboard. He was all the chessmen on both the black and the white side of the board.

My selection was based as much on curiosity (as well as the excellent reviews)
I was interested in Nabokov's writing style given that Russian was his native language. His mastery of words and phrasing is brilliant.
While it is true that this is clearly the autobiography of a man of letters rather than a world leader who accomplished world-shaking events, his entertaining descriptions of even the minutiae of life was very entertaining.
It is easy to see why his talent has been recognized so widely.
Recommended for the thoughtful and other fans of high quality prose writing.

it's Nabokov, tricky but masterful

what can i say? I love Nabokov. he is the most intelligent writer and always experimenting with style and form. this one may be a little more for his devotees with references to his other works abounding. not a huge fan of Rudnicki, though he does the Russian words and other foreign words/phrases well, his voice gets a bit ponderous.