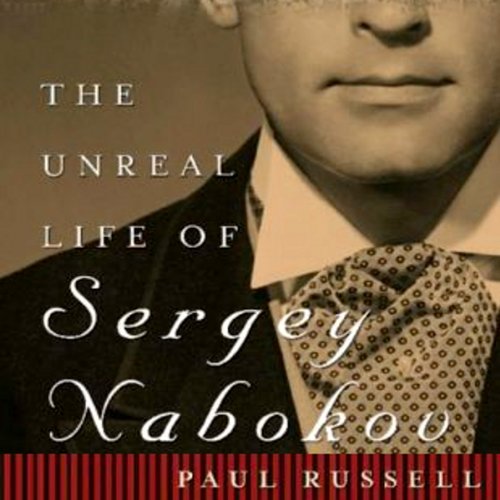 The Unreal Life of Sergey Nabokov

By: Paul Russell
Narrated by: Ken Kliban
Try for £0.00

In his novel based on the extraordinary life of the gay brother of Vladimir Nabokov, Paul Russell re-creates the rich and changing world in which Sergey, his family, and friends lived; from wealth and position in prerevolutionary Russia, to the halls of Cambridge University, and the Parisian salon of Gertrude Stein and Alice B. Toklas. But it is the honesty and vulnerability of Sergey, our young gay narrator, that hook the reader: his stuttering childhood in the shadow of his brilliant brother, his opium-fueled evenings with his sometime-lover Cocteau, his troubled love life on the margins of the Ballets Russes and its legendary cast, and his isolation in war torn Berlin where he will ultimately be arrested, sent to a camp, and die in 1945.

A meticulously researched novel, in which you will meet an extraordinary cast of characters including Picasso, Diaghilev, Stravinsky, Magnus Hirschfield ("Tante Magnesia"), Gertrude Stein and Alice B. Toklas, Cocteau, and of course the master himself, Vladimir Nabokov, this is ultimately the story of a beautiful and vulnerable homosexual boy growing into an enlightened and courageous man.

What listeners say about The Unreal Life of Sergey Nabokov

Delightful novel that takes a look at the fictional gay brother of the famous Russian author Vladimir Nabokov. The novel jumps between two time periods, pre revolutionary Russia and the Second World War, eventually merging at the devastating climax in Berlin during the War. A rich tapestry of real historical characters is woven into the story line, namely Cocteau, Stravinsky, Diaghilev and Gertrude Stein etc. making for some amusing and intriguing scenes as Russell brings these characters to life. Russell's style is impressive and entertaining, however, at times it becomes almost too clever for its own good becoming a distraction to the momentum of the story. Overall an enjoyable read and listen on both Kindle and Audible respectively.

What other book might you compare The Unreal Life of Sergey Nabokov to, and why?

A Stranger's Child, by Allen Hollinghurst.

Could you see The Unreal Life of Sergey Nabokov being made into a movie or a TV series? Who would the stars be?

The Woody Allen movie, Midnight in Paris, makes use of famous historical literary characters in an amusing and entertaining way, so there is good reason to assumes that Russell's book could be made into an absorbing movie. It has a good combination of humour and tragedy for an entertaining movie.

A fine story, an intriguing character!

What makes listening to this story less satisfactory than it could have been is the appalling number of historical blunders, anachronisms, etc. Dear Paul, if you write a historical novel, try to get your facts straight, even if this is the only "straight" thing that is expected of your novel! Or, find yourself a good editor. There was no Dnepropetrovsk in 1910, the city was called Yekaterinoslav! It was renamed in 1926 in honor of a Bolshevik. The Bolsheviks were not a known menace in 1916-early 1917. Barely anyone heard of them in those days! You should have rather talked about "the revolutionaries" or "the socialists" but not "the Bolsheviks" as a recognized threat to the Tsar's regime. Etc, etc. Of course, I know that you are just trying to deliver a smooth and accessible narration. But for someone who knows something about the Nabokovs and the Russian history, it is a pain seeing you make these kinds of blunders. Still, I am enjoying the novel (not finished yet).
Another good intro into "the other Nabokov" is this article in Salon: https://www.salon.com/2000/05/17/nabokov_5/

Vladimir Nabokov had a younger gay brother, of whom he and his family were deeply ashamed. Sergey was a talented artist, a passionate activist, and he died in a Nazi concentration camp.

This is his story, and Paul Russell deserves to win many, many awards for it.

A stuttering childhood in the shadow of his brilliant older brother, Sergey was a different kind of brilliant. He was devoted to classical dance, and many of his lovers were members the Russian Ballet corps. His life in Paris intermingled with the brightest stars of the Modernist Movement— as well as the habitueés of the opium den. To his ultimate end in Berlin, dying in 1945— Paul writes an extraordinary novel based on the life of an exceptional person.

I have spent many months trying to get through this audiobook and am finally giving up with about four hours to go.

The text is fascinating but the egregious narration is unbearable. It is spectacularly bad. The offensively homophobic voicing of the gay characters would be bad enough, but the tone and phrasing of every sentence is beyond irritating.

Such a rendering of writing of this quality is a travesty.

I gave up the book before really being able to comment on the story itself as the narration was unberable and I was simply unable to keep listening.

It pulled me back into Gay men's culture - I'm 35 years past that time in my life -but this book was written with a pretty good understanding of the guys and how each of the many types of personalities flourished in youth - and age.. Fir that alone this was an excellent book.
Why do we always have to die in the end... Its just as much a fact of live as the fact of our live