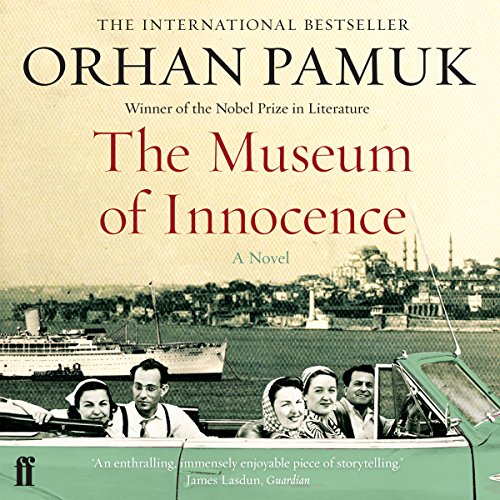 The Museum of Innocence

It is a perfect spring day in Istanbul. Kemal, a wealthy heir, is about to become engaged to the aristocratic Sibel when he encounters Füsun, a beautiful shop girl. He falls in love and finds his established world of Westernized families, opulent parties, society gossip and dining room rituals is shattered.

What listeners say about The Museum of Innocence

Life is too short

Chosen as a book group read. I couldn’t find anything to like in the story of a mans self indulgent selfish obsession. I’m sorry to say I had to stop listening for my own peace of mind - the central character just made me angry.

This is an unusual love story set against a vivid portrayal of Istanbul society and Turkish culture. It’s a depiction of obsessions: of love and yearning, of collecting (actually hoarding) keepsakes related to the beloved, of clinging doggedly to memories and hopes and dreams, no matter what.
The hero refuses to give up hope, and the story of his struggle is colourful, sad and heartbreaking. His love is relentless and encompasses every part of his life, seemingly to the point of delusion, perhaps madness.
He understands that in spite of her beauty and personality, his beloved has flaws, is just a woman as he is just a man. But his vision of her and of what they become together drives him on until the impossible is within reach.
This epic novel is a brilliant exploration of the human condition, which requires us to cling desperately to the illusion that happiness, our idea of happiness, in the end will be attained, or else it’s hard to know what there is to live for. We believe with him that his love is not in vain, for in the face of despair he finds a way forward.
To the author and narrator: Bravo, this is a literary masterpiece brilliantly performed.

Pretty boring story of some sort of mental illness

Except the links to the specifics of Turkish society in the 70s and 80s, nothing really piqued my interest. Long, boring, neither plausible, nor fantastic story, written with a limited vocabulary. Kept on listening in case the genius of a Nobel literature laureate would surface but it never did :-(

A book after my own heart. The language was perfect! Fusan was the object of Kemals obsessive love yet its was poignant, immersive, highly captivating. Nothing like I hv read before.

a wonderful love story of faithfulness

complex emotions captured ... orhan pamuk captures a true love story as if it was his.. with the utmost adoration to the characters that lived a love story so ordinary yet so soulful because of the faithful attention of the lover that transformed him to be her.. And his love to her has turned into a profound selflove and love for life.. I was moved by the book and by fusun and kemal that I felt deep love for my womanhood and my soul!!!

Everyone has some of this story in them

I have really enjoyed this book, there are so many elements that I found to relate to. A craving for love and forgiveness.

This is an excellent book. Pamuk’s writing is simply sublime and the way he plays with his characters and their and the readers perspective is fascinating.

The first novel I listend to by Pamuk, My Name is Red, was a masterpiece, so I was slightly comprehensive about this one. This is a story about the everlasting love, turned into all-consuming obsession, I as a reader got irritated with after listening for hours about a repeated heart pain, dinners, smoking, drinking.
If this novel were shorter, I personally would give it more stars. I know I can skip chapters, I did parts of few, but I would like not to have to do it.
John Lee's performance was impeccable, just like always. He helped me to finish it. The last long chapter was endearing again.

Best description of consuming and agonizing love I've encountered.
Provides a fascinating glimpse to Istanbul and Turkish culture in the 50ies to 70ies.
Book is further enhanced by fantastic, soulful reading by John Lee, which is only surpassed by Jeremy Irons's narration of Lolita.

I loved everything about it. Highly recommended book. The reading is superb as well.

The Museum of Innocence

What made the experience of listening to The Museum of Innocence the most enjoyable?

The ability of the writer to combine beautiful descriptive writing with character development and plot structure. The book has soul.
John Lees, narrator, does a super job.

Kemal, of course. He is the ringmaster of his life and a great, rich character. He
is never easy to decipher and it will be along time before I feel I have truly discoveredI him; But then
that's the reason Pamuk is such a great writer: he lets the reader be involved.

Early on, the chapter of the sacrificial goat. The final chapters of the love story - but that would be
spoiling it for you !

Who was the most memorable character of The Museum of Innocence and why?

Fuzun of course. An enigma, a mystery. A classic, romantic woman with a strong
mind.

Pamuk is reputedly not to everyone's taste. But why not, is beyond me. He is a
wonderful story teller. I suppose you have to work a little harder or be a little patient as he takes his
time developing the characters, plot. I love the sub-plot with Istanbul as the
protagonist.

Proust hovers in spirit over this masterful story of obsessive love.

John Lee's reading captures beautifully the tone of the book.