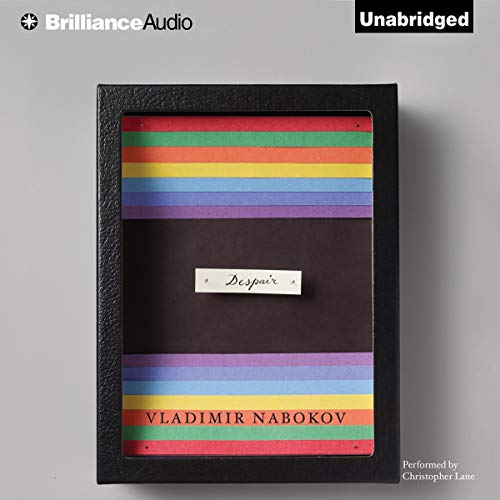 By: Vladimir Nabokov
Narrated by: Christopher Lane
Try for £0.00

Extensively revised by Nabokov in 1965 - 30 years after its original publication - Despair is the wickedly inventive and richly derisive story of Hermann, a man who undertakes the perfect crime: his own murder.

One of the 20th century’s master prose stylists, Vladimir Nabokov was born in St. Petersburg in 1899. He studied French and Russian literature at Trinity College, Cambridge, then lived in Berlin and Paris, where he launched a brilliant literary career. In 1940 he moved to the United States, and achieved renown as a novelist, poet, critic, and translator. He taught literature at Wellesley, Stanford, Cornell, and Harvard. In 1961 he moved to Montreux, Switzerland, where he died in 1977.

“Nabokov writes prose the only way it should be written, that is, ecstatically.” (John Updike)
“A beautiful mystery plot, not to be revealed.” ( Newsweek)

What listeners say about Despair

While this isn't my favorite Nabokov novel and I have to leave room and stars for its better, it is stil bold and amazing. Nabokov is one of those writers I will never tire of. He is imaginative, funny, tight and always just a little naughty. Despair is a false double novel that at once mocks, parodies and honors Crime & Punishment. It was like Nabokov set out to write a fanciful doppelgänger novel of Crime and Punishment, but felt like he would prefer to dress Raskolnikov up a bit; bend the mirror and make him fancy, turn him into a Russian emigre candy dandy.

Let's just say it's for the intellectual type!

This may sound bad, but the book makes me think about these modern paintings, black on black, little cubes on white font; in fact, the vaguely modern Rothko image in the front is a good indicator of who should like the book.

Honestly, the book is entirely incomprehensible, something that the narrator does masterly convey (and contributes to). Everything that happens is completely absurd, to the point that it is difficult to say that something is actually supposed to be funny. It's hard to understand the character, what happens to him as if everything happened in a haze. The intrigue takes a long time to kick in and, when it does, the mind is so anesthetized that it took me a while to realize that some intrigue was beginning. I know this is a literary style, maybe it's closer to poetry than it is to a novel?

Merely a Forefunner to Lolita

Seriously, I didn't like this. Yeah, I like how Vladimir Nabokov writes but this book just doesn't have the sparkle, the humor or the polished writing of Lolita or Speak, Memory or other books by the author. It feels like a piece that still needs more work….or maybe you can work something to death. Look at the history of this book. Despair first came out in 1934 as a serial in the Russian literary journal Sovremennye. It was published as a book in 1936, translated by the author into English in 1937, but what exists today is the author's reworking of 1965. Clearly he did have time to rethink this.

Why doesn’t it work for me? Despair not only was a forerunner to Lolita, published in 1955, but it feels like that too. One can compare Hermann of this novel with Lolita's Humbert Humbert. Both are unreliable first-person narrators, but one is a shadow of the other. Not in who they are but in the strength of their characterizations. Lydia, Hermann's wife, doesn't come close to Lolita's Dolores.

So what is the theme of this one? It is a murder story, but more! It is really about doubles, about identity and what connects one person to another. Hermann is delusional. Anything he says has to be questioned. Of course that is true too of Humbert Humbert, but there it is easier to just see the facts presented as his point of view. In Despair the story is so much more complicated; you are thrown between the writing of a story, how authors write stories and what actually happens, i.e. the events of the tale. Too complicated! Not properly thought through. Similar themes but quite simply not as good.

There are also funnier and more noteworthy lines in Lolita. More to chuckle at. More to think about on all sorts of themes, having nothing to do with sex or murder.

Christopher Lane does a good job with the narration, even if occasionally when he personifies dubious characters of Russian origin it was practically impossible to hear the lines. Arrogance, self-satisfaction and delusional traits, as well as furious explosions of temper all are well intoned.

For me this was quite simple a forerunner to Lolita. That I gave five stars.

Nabokov is a master prose-writer. I really enjoyed the beauty and cleverness of his writing. After Lolita, this was the second book I listened to by Nabokov. I can't wait to listen to more of his works.

I love that this is not “read by” or “narrated by” Christopher Lane; it’s performed by him. And what a performance, too. He really brings the subtleties of Nabokov’s humor to life. Highly recommended.

so clever most likable antihero ever i wish they were all like this -i joined audible just for this one and i’m so glad i did!