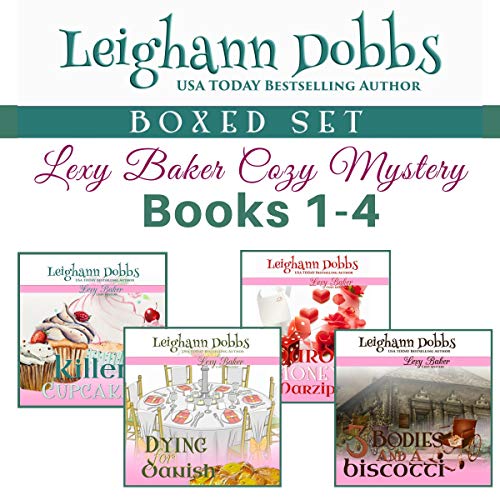 By: Leighann Dobbs
Narrated by: Hollis McCarthy
Try for £0.00

Hilarious whodunits that will keep you listening well into the night. This USA Today best-selling box set contains the first four books in the Lexy Baker Culinary Cozy Mystery series.

Join Lexy Baker and her posse of iPad-toting grandmas on their first four adventures as they try to outwit a variety of clever killers. This box set has a lot of mystery and a little bit of romance complete with recipes!

Lexy Baker has finally opened her dream bakery, gotten rid of her cheating boyfriend, and settled into her grandmother's house with her perky dog, Sprinkles, at her side. Things are going great...until her ex-boyfriend is found poisoned with cupcakes from her bakery.

Suddenly Lexy finds herself in the middle of a murder investigation headed up by her hunky neighbor detective, Jack Perillo, who figures her for the killer. Lexy takes it upon herself to find the real killer aided by a gang of iPad-toting, would-be detective grandmothers.

As things heat up between Lexy and the hunky detective, the real killer closes in, and there's only one question to be answered - will Lexy get her man?

When Lexy Baker stumbles over the body of her high-paying catering client, she finds herself in a race against time to find the killer. Aided by four iPad-toting amateur detective grandmas, her best friend, and her little dog, Sprinkles, Lexy finds the suspect list growing at every turn.

To make matters worse, the investigation is headed up by her hunky neighbor, Detective Jack Perillo, who she had been hot and heavy with - until he mysteriously stopped calling her several weeks earlier. Add in a handsome rich suspect, an angry gold digger ex-girlfriend, and a suspicious son, and you'll see that Lexy has her work cut out for her.

Lexy's off to Las Vegas to compete in the prestigious Bakery Battles where, you guessed it, she stumbles over another body. But not just any body. Contest judge Amanda Scott Saunders has been strangled with Lexy's apron. The local police soon discover Lexy had means, motive, and opportunity, and Lexy must enlist the aid of her grandmother to help clear her name.

3 Bodies and a Biscotti

The bodies are piling up at the Brook Ridge Falls Retirement Center. Healthy people are dropping like flies. And yet, no one believes a murderer is on the loose...except for Lexy Baker and the troupe of iPad-toting grandmothers who live at the center.

When Lexy’s detective boyfriend, Jack, refuses to believe that foul play is involved, Lexy has no choice but to find the killer on her own. Along with Nans and her gang of iPad-toting, mystery-solving grandmas, they use everything from hypnosis to high-tech gadgets to track down the killer.

Not my cup if tea

I found these series of books disappointing. The heroine was like a wet wash cloth i.e. a big drip! Always walking into trouble dispite being advised to the contary.
Definitely not for me.

An easy listen to book

I found this entertaining. Near the end of the fourth book, the situation made me feel uncomfortable as Lexi realised how she was being treated and her closest family and friends found it funny. Otherwise, it was an easy listen to book.

NOT a cozy mystery

I was disappointed. I expect books labeled "cozy mysteries" to be totally clean. This book contains swearing, references to missing a warm body in her bed after breaking up with her boyfriend, and mentions the tongue during one of the first kisses. totally inappropriate. I deleted this series after the first book. The mystery itself was predictable, but not bad.

I love a good cozy mystery! You have a little mystery to solve, fun characters to get to know and sometimes a sprinkle of romance! This didn’t hit the mark with any of the prerequisites for a good cozy! The mystery was half hearted and superficial. The character development was alarmist non existent and the romance was alluded to, but not developed. I did not even finish the second book. On a side note, the narrator had a pleasant voice but did not have the depth to keep it interesting. I apologize for being so negative. But I don’t want anyone else to fall into the trap of wasting a credit on these books.

Glad these were put together in a box set because I usually filter out books of short duration. These are the classic cozy mystery. In the first book the main character seems a little unwise but the rest are better. If you are looking for a classic cozy mystery these are perfect, some mystery and a little bit of romance.

Repetitive, even for a cozy...

So the stories are cozies, and cozies aren't known for containing the most substance, even in fiction, but this one really disappointed me. Additionally, I expect them to be clean, and this one was a little on the trashy side.

The lead character and her best friend are too interested in what other women are wearing, or carrying in name brands, in every episode I listened to. They both fall for cops, that's fine, I happen to work with cops. Grandma Nan's in the nursing home with her friends and are all similar in attitude. There just isn't enough interesting about the characters. Most of the men are hunky, and the women a little on the snobby side. As I said, too repetitive, and no depth. Lame, even for a cozy.

Then there's the narrator, who isn't bad for a woman, but she lacks a lot in imitating a man's voice which there are far too many poorly done in this series.

I just can't finish it. I am returning this series.

There's nothing complex about these stories, they are obvious and simple. But they are so endearing and the reader does such a good job that they are worth it. I enjoyed the stories and the reader. Great easy listening when you want to have a mini getaway. Definitely recommended.

I ordered it and then read the reviews. The initial plots were interesting but the characters, their reactions and responses remind me more of an adolescent novel. Did appreciate the recipes.

Loved this boxed set! The story flowed nicely and the characters were well constructed. Highly recommended​.

WHAT A GREAT TIME!! THESE BOOKS ARE SO ENTERTAINING! SO DELIGHTFUL! LOOKING FORWARD TO FINDING MORE!

This is a fun series of books with Lexie Baker and her grandma Nan and her group of murder solving ladies from the senior center. A lot of specialty baking with murder dumped in to make things interesting.