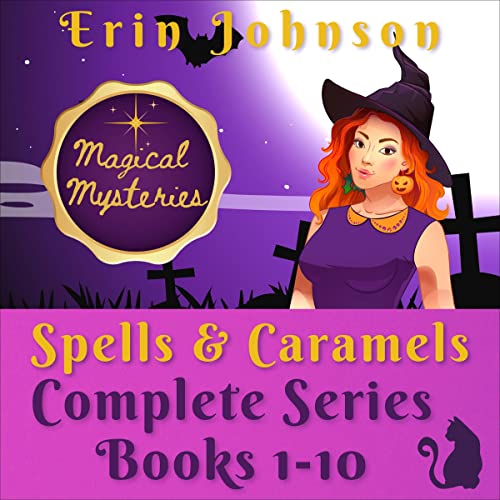 By: Erin Johnson
Narrated by: Hannah Somerville
Try for £0.00

After a disaster ends her career, destroys her home, and burns up all the money she’s saved to open her own bakery, she enters a baking contest for an all-or-nothing last-ditch chance at getting her life together.

But when she arrives at the mysterious island off the coast of France, she discovers all the inhabitants of the quaint town are magical, and if she wins the contest, she’ll become the next royal baker at the castle on top of the hill. No worries that the last royal baker appears to have been murdered.

And one more small thing—Imogen herself is apparently a witch!

As Imogen struggles to learn new spells, wrangle a snarky magical flame into baking her desserts, and try and not burn the whole white tent down in the process, a fellow contestant drops dead with all evidence making Imogen the top suspect.

But she hasn’t only caught the eye of the bumbling and pompous police inspector, who’s doing his best to pin the crime on her. With a hunky medic and a broodingly handsome baker vying for her attention, Imogen’s whipped a little romance into the mix.

But when she discovers ties between the recent murder and the previous royal baker’s death, Imogen’s out to not only clear her name, but figure out which of the cooks has a taste for killing.

Will Imogen tap into her fledgling powers in time to save herself, or will it all prove a recipe for death and disaster?

You would think over 60 hours of listening to this series would be enough, but no, not for me. I could listen to Imogen’s adventures forever.
The storylines are unique and the worldbuilding is perfect. There is a lot of suspense, but also a lot of humour. Imogen and her friends are amazing, I loved all of them (especially snarky and fiercely loyal Iggy). Hannah Somerville narrates the stories brilliantly.
To me this is the best audiobook box set of 2022.

To be honest I would normally write a great big long review telling you about each book but I won't because this is an incredible 10 book box set and you don't want to be reading about what I think when you could be enjoying it for yourself. I will say that I loved every book and it is simply a magical series that will keep you entertained for hours. I would normally not listen to every book in a box set striaght after each other but as each book follows on from each other and is so totally different I just couldn't hit the stop button. The reason I love this series (and wish it hadn't come to an end) is because of the cast of characters. From the grumpy talking flame, to the sweet shy shifter snake, the scary vampire bodyguard, the harassed part planner, the pirate king and even monsters from the bad lands all find a place in your hearts and that's just to name a few of the wonderful characters. Each book as a murder or problem to solve for the royal bakers and each one is cleverly crafted to keep the listener guessing and infused with magic it certainly never gets boring in the kingdom. It's also a series that when ever you need cheering up or a good laugh you can visit again and again. Just love this series and author and can't get enough of her books in any of her delightful series.
I love the narrator. She puts so much into her story telling and all the emotions she and the characters are feeling comes across loud and clear, dragging you into there world.
If I could give this 10 book box set a higher review rating than five stars I would, without any hesitation.
I was given this free review copy audiobook at my request and have voluntarily left this review.

An interesting world with cozy crimes

First I want to say that I received this as an ARC copy in exchange for writing a review. However, I will be fair especially as it was on my wishlist before I got this opportunity.

While most of the mysteries were not super difficult to figure out (which isn't a problem for myself, as I like feeling clever), the characters and world are engaging, particularly if you enjoy Harry Potter. Most of the characters grow throughout the series, and the world undergoes major changes, all while maintaining a relatively optimistic out view. The only parts I didn't particularly enjoy are when Ms. Johnson tried a little too hard to be funny and put the main character in ridiculously embarrassing positions, though thankfully they were uncommon (I believe four to five times over the course of ten books) and fairly short lived (less than an hour of audio each time).

The audio production is pretty good, particularly considering that it is 64 hours of audio, which is a lot of reading and editing. There are two incidents where the narrator, Ms. Somerville, clearly needed to restart and she used a clicking sound to indcate this but was missed by the audio editor so the story repeats a short segment. This happens in Chapter 24 of Book 2, and in Chapter 6 of Book 3. While I didn't love Ms. Somerville's voice, she is an excellent reader with a number of distinct voices for most of the characters and is a good representation of the main character in particular.

In short I would not have been disappointed with it if I had spent a credit, as it was an enjoyable set of paranormal cozy mysteries.

I’ve never reread a cozy book except for these. I’ve listed more then once to this series. It makes me laugh & warms my heart in all the right places like rewatching a favorite sitcom.

The performance is wonderful! Even better then the voices inside my head.

A bit of a warning… you will want to visit all the worlds Erin writes when your done.

This series is so amazing that I got the box set to be able to review it. I absolutely love Erin Johnson’s mysteries. Some of them are 5-6 hours and we still felt they were a bargain for a credit but this box set is amazing! 10 books 63 hours of amazing mysteries for a credit! If you like paranormal cozies this is a must have. It even avoids the overly gushy romantics or overly gritty profanity that most of these types of series have. It is family friendly, intriguing, and now available at an amazing deal. Magic, politics, baking and everything. Now stop reading this review and buy the set :)

I've never listened to this type of mystery but I was hooked instantly. The author has an amazing writing style, her other series was just as awesome abs the narration was on point! love love love it.

Hannah Somerville does a wonderful job of bringing the lovable characters and magical world that Erin Johnson has created to life. When Imogen decided to enter a baking contest, she never imagined in her wildest dreams the impact it would have on her life. Trouble seems to follow Imogen and her friends wherever they go. This series is full of magic, mystery, and even romance. Definitely worth a listen.

I really loved the magical journey of this series! Good stories, and really fun characters!

great deal and worth more than 1 credit. great narrator, good story. characters develop well and are relatable. I was very pleased with this series

These are a totally delightful set! Hard to put down, the only complaint I have is that the series ended! The main character Imogen is so funny and delightfully sweet and nice, but the trouble that she gets into makes you wonder. I love the settings of magical kingdoms that mystical beings brought into the story line. I would highly recommend reading/listening to this series and you will want to do it again! A great laugh out loud cozy mysteries.

I am enjoying listening to this series, the voice artist is great! She makes the characters feel real because she adds the sighs, giggles & snorts of laughter.

I have read all of Erin’s books & always looking forward to her new books❤️.

This book series was great I loved it all. It kept my attention lots of adventure. The characters were my favorite the narrator did great on the different characters they all sounded different. I would love more.