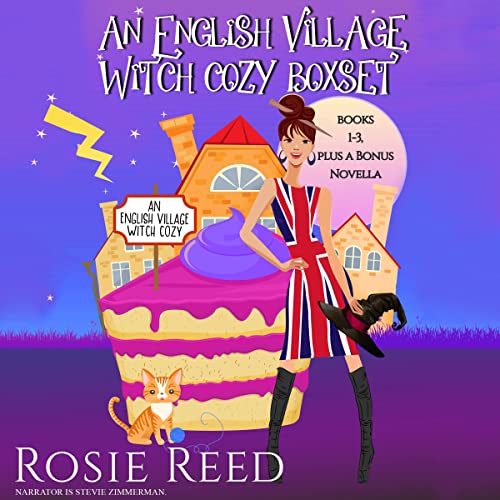 By: Rosie Reed
Narrated by: Stevie Zimmerman
Try for £0.00

Marilyn Eldritch wasn’t the sort of witch to let a simple thing like death spoil her life....

And so began the adventures of a novice witch in one quirky, quaint village, containing a maddeningly handsome policeman and a whole lotta murder, mystery, and magic! Dive into this enchanting four-book boxset!

If you love plucky heroines, small-town whodunits, and a touch of retro nostalgia, then you’ll love Rosie Reed’s fun and flirty tales!

Book one, Murder at Magic Cakes Café: When Evelyn learns that her biological mother has died under suspicious circumstances, she makes a journey to the quaint village of Maiden-Upon-Avon, where the residents consist of werewolves, witches, vampires, and one annoyingly handsome-yet-gruff policeman. Can they solve Marilyn's murder together?

Book two, A Midsummer Fright’s Scream: It’s midsummer night, but mischievous fairies are the least of Evelyn Eldritch’s problems. With a murderer on the loose, a midsummer dream is turning into a nightmare!

Exclusive novella, Harvest Hemlock Horror: When the winner of last year’s Resident of the Year Award dies in suspicious circumstances, Evelyn Eldritch wants to investigate—especially as she believes DI Alex Taylor might’ve been the intended victim. But why would anyone want Alex dead?

Book three, Halloween Hex Appeal: Turning her cat into a waitress seemed like the purrfect solution to a busy night at Magic Cakes Café. Until a guest is murdered. And now it looks like Evelyn might be next!

You deserve a holiday! Take the phone off the hook of life and enjoy soaking in the bathtub of the beautiful English countryside today!

I have fallen in love with these stories, the characters and the humour are wonderful. The mystery side is well written and there are plenty of red herrings to keep you guessing. The narration is great. I will definaly be reading and listening to more by this author.

This is a most entertaining listen, the characters are well developed and likeable. There are many laugh out loud moments in these 3 full length stories and a short novelette. The short story is the 3rd in the box set. The narration is spot on and for Cozy fans it's a highly recommended listen.
I was kindly given a copy of the book for review and this I do voluntarily.

The English Village Witch is a delightful paranormal cozy series, set in a thoroughly pleasurable world. I loved the quirky characters, their sense of humour and sarcasm, the mystery, and the overall feel good feeling.
Stevie Zimmerman is the perfect narrator for these books.
Highly recommended!

great read and characters , thoroughly enjoyed this box set looking forward to the next series

Mystery and magic at its best

There are some authors that no matter what you are doing when you see they have a new book out, you have to drop everything and read or listen to the book. This is one of those authors, so it is just perfect that she has combined her first three books in the series together in one magical place, this means the adventure doesn't have to end so quickly. I also like the fact that it is set In England which is as nice change and adds a quaint feel, although I have never stumbled on a town like this one or should I say that I know of.

Murder at magic cakes cafe book one
I loved this book. It is a fun quirky paranormal mystery. I liked the mystery of who killed Evelyn's mother and with lots of suspects it was hard to guess. But I think it was the paranormal side to the story that really caught my imagination and I loved. Not only is there the usual spells backfiring with new witch's that have just come into there powers but there is also some great supernatural characters, I especially liked the werewolves and had my fingers crossed that they weren't the killer (you will have to read or listen to the story to find out). It is a nicely crafted story that keeps you listening until the end.
The same night Evelyn is struck by lightening while rescuing her sister's cat from a free is the same night her birth mother dies and her world gets turned upside down. She and her nephew travel to Maiden-Upon-Avon to find out more about the women she never met. It's not long before Evelyn starts to notice that there is something very different about the small town and it's not just because the detective in charge of the case refuses to see the death as a homicide. Why would a woman loved by the whole town commit suicide? Evelyn believes that the quicker she finds out the quicker she can leave the strange little town and all the weirdness behind. Then she mets her Grandmother and anything suddenly becomes possible, like helping to win the cooking competition for her mothers assistant, making friends with werewolves, annoying a certain detective just to try and get him to smile and even catching a killer.

A Midsummer Fright’s Scream: book two
The author packs a lot into her stories and with the magical element, the mystery is certainty spell catching. The mystery was interesting and I liked the way Evelyn had a group of suspects right from the start but had to work out how they seemed to be in two places at once and just when you thought you had figured it out boom you get hit with a big twist. As well as keeping you on your toes, guessing who the killer is, the author paints a very vivid picture with her words creating a beautiful and magical little village that is easy to imagine. I must confess I don't know much about Shakespeare plays but even I found myself looking up the play on the internet to find out more, I was that hooked.
Evelyn thought the hardest thing she had to do was learn a few new magic spells and get her nephew to admit how he feels about her young waitress but then again it is coming up to midsummers night when anything can happen. The village is embracing the celebration by putting on the Shakespearean play, a car show, music/dancing and fun games but before the celebrations can get underway a car crashes into the cafe. The driver is found dead with a steak through his heart and clutching a silver bullet. He wasn't a vampire or a werewolf so why was these items involved? Could magic be the reason? The victim was a ladies man so there is going to be a lot of suspects including his best friend and his wife. With the most likely suspects having alibis and yet hidding secrets, police detective Alex asks for Evelyn's. Can she help solve the reason for the murder and how it was done? Can she also talk the moody policeman into letting his hair down, by putting on green tights to step into the roll of Puck, so the show can go on? What about helping her nephew find love? The one thing she doesn't mind letting slip is the weekly magical council meetings but with Werewolves, Angels and witches on the board maybe they might prove the be helpful in solving a few things.

Harvest Hemlock Horror: novella
This might be shorter than the rest of the stories in this box set but it is just as good. I had guessed the killer but still enjoyed it as it is just as full of magic and mischief.
Alex is up to win an award for his contribution to the village of Maiden-upon-Avon but after a mix up with the dinner orders, an angry table companion who didn't win the award storming out the last thing he needed was to have the last winner get hit by the lighting falling on her. Instead of enjoying there time off Evelyn and Alex find themselves investigating a murder. It also turns out, she was also poisoned and as Alex was the one to give her his dinner, was he the intended target? They quickly discoverer that in his past Alex had wrongly arrested her for embezzling, Evelyn armed with that information finds another death connected to Alex's past. Can Evelyn find the killer before they try killing Alex again?

Halloween Hex Appea : book three
The mystery is cleverly crafted to keep you guessing the whole way through but at the same time the clues are there. It has also has a number of suspects and to be honest you weren't even sure if the right victim died until the end, which is always a sign of a good book. The Bond theme throughout the book was subtly done and made for some interesting costumes. I am really enjoying the budding relationship between the main character and the detective who is a little out of practice.
Evelyn is on her own catering for her landlords Bond themed birthday party, as her normal staff are stuck on trains. That's the only reason she would a tempt to use magic to turn a temperamental cat Trixie into a waitress. Tempers are already high with the guests as he introduces them to his new and much younger bride and the new waitress spilling the drinks doesn't help. Unfortunately things don't get any better when the birthday boy is found dead after drinking a cocktail with cyanide in and it wasn't even his drink. Someone also stole his wedding ring. Who was the killer trying to kill and why? surely it wasn't just for his ring? The new wife is scared that as the drink was hers, that someone might try again and asks Evelyn to help find the killer and the ring. Alex the detective might not suspect Evelyn but how can she explain Trixie and her sudden disappearance? At the same time Evelyn has to help run the village Halloween celebrations without the humans amongst the villages finding out that there lives could be in danger. Can she manage it all? Just when she thinks she might have a big clue, another body is found and she is left a deadly cupcake. Caught in a deadly game of cat and mouse who will come out on top? The killer or Evelyn?
I liked the narrator. She is a good choice for bringing these characters to life and does it superbly.
I was given this free review copy book at my request and have voluntarily left this review