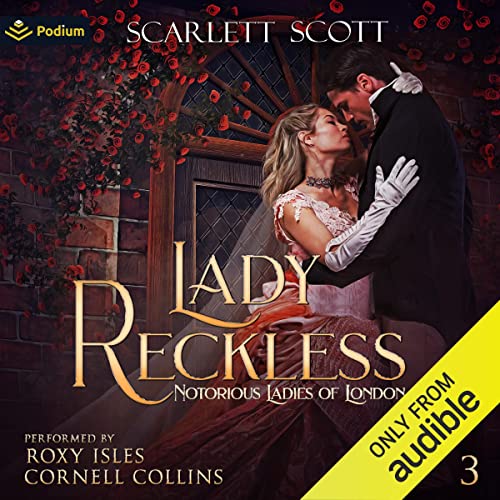 By: Scarlett Scott
Narrated by: Roxy Isles,Cornell Collins
Try for £0.00

Lady Helena Davenport is desperate to avoid the odious betrothal her father is forcing upon her.

The only way out is to orchestrate her own ruin. Everything is unfolding according to plan; her escape is finally within her grasp. But there is just one problem when the moment of scandal arrives: the rake she selected for an assignation is nowhere to be found. In his place? The man she secretly loves.

Gabriel, the notoriously proper Earl of Huntingdon, is outraged when he discovers his best friend’s innocent sister, Lady Helena, has decided to give herself to a scoundrel. His impeccable sense of honor will not allow such a travesty to occur. When Gabe confronts Helena, the last thing he expects is to find himself tempted to commit wickedness.

Fortunately, Gabe is strong enough to resist. He already has a betrothed of his own. However, he is now tasked with the unhappy duty of following Lady Helena to keep her from committing further folly. And the more time he spends with the infuriating minx, the more impossible it is to resist her.

Helena is running out of time to save herself from an unhappy marriage. With the Earl of Huntingdon haunting her every move, her hope is dwindling. Until she settles upon the one certain means of securing her freedom, even if she risks making Huntingdon hate her forever…

What listeners say about Lady Reckless

I Loved this Book

Yet another book I really enjoyed. The story just flowed as all the books in this series do.
I'm off to listen to the next instalment.
I would definitely recommend it

As are all the books in this series, it is full of excitement, love, twists and turns.

I love this little series... they are all so good. Cornell Collins is extremely talented in his readings... he puts forth much enthusiasm, perfection in the utmost.

love it!! is very good

love his voice!!! and the story is very compelling. can't wait for the next one

Another great and sexy book in this series

I loved the book and the narration. Both narrators convey the emotions and tone of the words perfectly! This is my second historical romance series and I am so glad I chose to listen. If you are not a fan of highly detailed sex scenes then please do not read or rate the book negatively. I live for naughty books and this did not disappoint! Thank you so much everyone for the dedication and work you put into these books. All of us listeners greatly appreciate it.

I wasn't sure I would like this book but enjoy it I did! The narration of it was wonderful, but it was Mr. Collins litany that made this a listening pleasure.