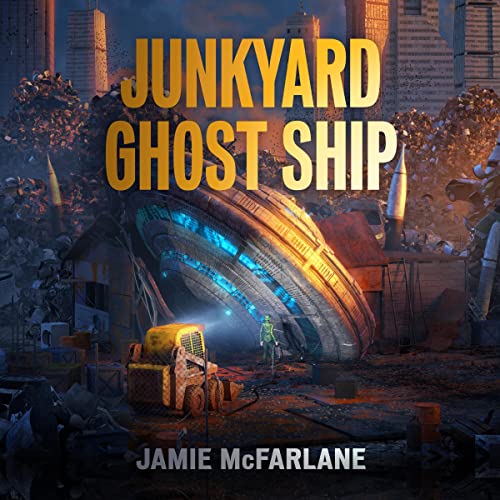 By: Jamie McFarlane
Narrated by: Mikael Naramore
Try for £0.00

A flying saucer's crash-landing is just the beginning of a race against time to save innocent aliens from a devious plot.

Albert Jenkins and his friends have enjoyed several months of peace, which is why when a Rosengul spaceship crash-lands into his new house, he's not exactly surprised.

From the wreckage, a pair of ordinarily reclusive small Rosengul emerge and spin a tale of kidnapping and deceit. Of course, AJ, not always the most sensitive, asks the pertinent question of how that involves him and his friends. The simple answer is that AJ and crew have developed a reputation of getting things done, probably because his methods skirt Galactic Empire rules. Someone has been kidnapping Rosengul aliens, and their government is either unable to chase down the problem or unwilling to try.

But before AJ can even get a full description of the problem, a team of heavily armed human commandos fast rope their way into the middle of Darnell’s backyard barbeque. Having brought barbeque sauce to a gunfight, AJ and his team are easily overcome, leaving Doctor Jayne seriously injured.

If AJ wasn’t invested before the commandos arrived, hurting his fiancé was a great way to drag him into the fight. The biggest question is: Will he have to fight Army Intelligence, or will they finally join forces for the benefit of all?

Junkyard Ghostship is an action-packed race across the galaxy that will keep you up listening late into the night.

Is slapping wrists of killers, pacifism

Had to stop reading the series due to how AJ keeps letting people walk all over him.

Literally people are trying to kill him and his friends and he goes out of his way and puts them in danger to use non lethal attacks back.

Cant stand the characters here. Evil will triumph if good men do nothing? So will it if they slap evil and the wrist and then let it go back to doing its thing.

Impatiently waiting for the next book

Listen to this series! You won’t regret it! Love the story line, the characterization and the narrator.

Not my usual venue

I managed to finish listening to this book in spite of the fact that it did not truly engage my imagination. Not my usual genre of Sci-if and I found it disappointing.

Worth your time. Easy listening and fun but....

It's a really fun series to listen too, but I wish there was a little more diversity. They're exploring alien species and all the species apparently practice single male-female relationships. Scifi is the genre to explore diverse relationships and societies, but in this series there haven't been any same sex, polyamorous, group marriages...etc. I would like some queer representation in humans too, but usually aliens in sci-fi books have a larger spectrum of relationship concepts.

combo of gi joe and atarwars very pleasing adventure really like the chsrscters. i hope more mike naramore is great.

Decent addition to the series

This was a decent addition to the series. I just wish the books were longer.

Characters well defined . Stories you can all most see. Told by one of the best. Thank you

Love the light reading and romps through the sci-fi genre. Keep up the good writing.

Aw
whole lot of fun and a nice continuation of the series. This one is not a cliffhanger, but it leads so strongly into the follow-on novel that I can't wait to get to it! Somebody tell Jamie McFarland he needs to get writin'!