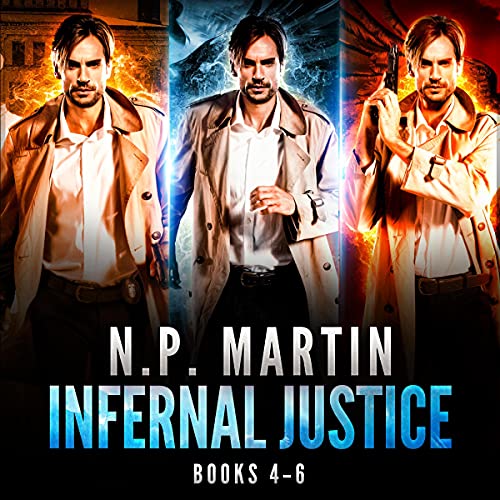 When you look into the abyss, the abyss looks into you.

After dumping the body of a serial killer on my former boss’ desk, I handed in my cop badge, which I’ve replaced with an FBI badge. Yep, I’m a fed. I work for Special Affairs, a clandestine department tasked with policing the occult underground.

My first case has me investigating a sinister therapist organization called the Mirrorists, who seem to specialize in convincing Mytholites into committing suicide, taking as many with them as possible. Evil doings are afoot, and it’s up to me to find out the identity of the leader of the secretive organization and bring them to justice...or an early grave. Whichever comes first.

In the meantime, my personal life is a disaster zone. There’s a Yakuza boss who wants to kill me, and my crazy Hellicorn is going through an existential crisis...with dire consequences. But it’s the evil warlock - the same one who masterminded the deaths of my wife and daughter - who is making my life a living nightmare.

Not only does he invade my dreams every night, he also haunts my waking hours in a bid to drive me insane. If I don’t stop him soon, I fear I might end up certifiable...if I’m not already. With my sanity hanging by a thread, and my life veering out of control, running away with an old flame is looking like a good option right now.

I wonder what Hell is like this time of year? It has to be better than here. Harry Bosch meets John Constantine in this gripping urban fantasy noir thriller series.

John Constantine theme but different not bad at al

A great series of 6 UF books

I’ve thoroughly enjoyed this irreverent, bawdy, action packed urban fantasy adventure from book 1 to book 6. I can definitely recommend them to all UF fans. I’ll be buying the prequel as soon as it’s available on audible and then checking out what else this inventive author has written.

The narration on these audiobook is excellent btw. A few amusing mispronunciations but nothing that impacts the overall quality.

I blooming loved this story you will too

Really enjoyed listening to these as I did the first 3 books. I'm hoping the author is going to continue with this series Infernal Justice, the end has been left as he could write another book or leave it as it is.
Time will tell if we hear more about Ethan Drake and the Hell Beasts or not. I hope so.

Wow! What a ride…

There is so much going on and it all flows seamlessly. Ethan has his hands full again but he’s got friends to help. There’s a trip to hell, the author knows how to paint a picture, where Ethan finds Lucifer and all his baggage. There’s action,adventure, hellicorn shenanigans, some good humor. I hope there’s more but if this was the end it was satisfying. Plus 3 books for 1 credit!

Took a minute to get into but was well worth it. excellent urban fantasy hope to hear more from this series.

I have to say this is one of the best series I have read in a long while. I just couldn’t stop till I finished. And the narrator Mr. Higgins let’s just say best one I have ever heard. To Mr. Martin well done. I will be listening to all your work. Thank you for making my imagination run wild

I had a hard time with parts of it but soon got the reasoning behind what was written. very good series. would recommend it

I am not sure why the narrator had so much of a problem keeping the voices of his characters the same but it was very distracting.

Also it was a very anti-climactic ending to the series.

Have all six books and think the series is great! Can hardly wait for more installments .

This 3 books are even darker than the first 3

Did the good really win over evil? These books talk about the hell we currently have here: Child abuse and human trafficking. I just hope that all those monsters have a quick death and go to hell.

very good series I highly recommend it. can't wait for the next one the series

Good listen! Worth it!

The way the narrator read the entire series so well, a great story teller for sure.