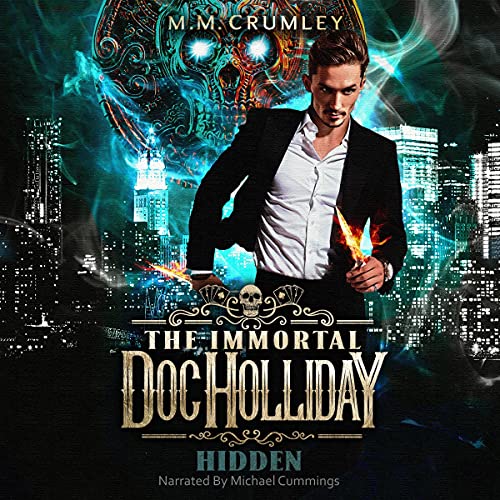 By: M.M. Crumley
Narrated by: Michael Cummings
Try for £0.00

Lying on his deathbed, Dr. John Holliday was offered a choice: Let the tuberculosis finish its work or accept immortality. Doc chose the latter, knowing full well that such "gifts" don't come cheap, but damned if the last 200 years haven't been a blast. Partying, playing, fighting, killing; yes, eternal life's been good.... But the time to get serious has finally come, and the task he's always known he was saved for is at hand.

Now in modern-day Denver, Doc will be pushed to his limits to keep his promise and save the missing descendent of the beautiful shaman who gave him everlasting life. The trouble is things aren't going as planned, and it's becoming clear that there is far more at stake than Doc bargained for....

Fans of edgy urban fantasy look no further! If you're into badass, morally ambiguous antiheroes who don't flinch at killing bad guys (and stealing their souls), then this is the audiobook for you! It has the perfect blend of supernatural action, humor, and mystery that you crave!

Listen to this first book in the ongoing series today! (Do it now.... Don’t fight it.... Just let it happen).

Note: This version of Doc is a knife guy rather than a gun guy. Fun historical fact: The real life Doc's first confirmed kill was done with a knife; he only switched to guns because of his failing health. Enjoy!

What listeners say about Hidden

Found the narrator boring. Storey line isn't my cup of tea. I only recommend this book of you're fond of chauvinism.

I cannot say for sure whether I found the writing, the narration or something else poor but after a very short amount of time this “book” became unbearable.
I appreciate people put effort into making this and I don’t like to criticise but I strongly recommend avoiding this if you are an adult with any sense of personal growth. Perhaps it gets better as it goes on.

So good until the end.

The ending makes the rest of the book feel like an introduction to the world but makes everything that happens to that point meaningless. I was loving every bit of it until the last chapter.

For me UF needs magic but Doc has none and I could not get past that fact. He uses knives and intellect to survive the impossible. I really needed him to throw a spell or alchemy potion or something. Also he is shallow and not much of a strategist. In spite of this not being a fav for me, I will read this author's work should I cross it again. The world-building and the scope of characters impressed me enough to get through to the cliffhanger ending.

this is a good story but written poorly

I'm sure the story was better than it seemed, but the lack of dynamic narration really just sucked almost all the enjoyment out of this one.

Not your typical doc Holliday

I really couldn't get into it. it was just extremely tedious and slow. not again.

It's not terrible, and the poor voicing of it hurts it a lot, but it still just wasn't that well written. Main character was pretty boring and the side characters were all the typical sidekick levels, just not amusing or interesting enough.

Don’t discount the book yet

The story is so/so but that’s not uncommon in new series. There’s a lot of potential here so I’m hoping the second and third books start bringing it all together.

The premise is original. the characters are developed well. wish the rest was on Audible.

Mostly just sets the stage for the series

There are some new twists to the urban fantasy setting and a somewhat original variation of Doc Holliday. Frankly, I think the Doc Holliday character and world of the Wynona Earp TV series gave a better supernatural twist on a modern day Earp with a (demon) soul eating gun. Here, Doc has a soul eating tattoo and never once fires a gun. Why have him forego guns? I’m not sure there’s a good reason. And the whole sleazy womanizer, inveterate gambler and booze hound thing doesn’t make him an anti-hero; Doc is simply a schmuck who’s done nothing to improve himself in over a century. When we meet him, Doc is still going on blackout binges and sleeping with engaged women. He also doesn’t do any good deeds unless there’s something in it for him- namely, paying a debt by saving a gal.

Book 1 provides Doc’s origin story through a jumble of confusing flashbacks. Between the dead affect narration and the lack of signposting, it took me a while to realize when the story was in the past vs. present. For every explanation given about Doc, the magic rules, the various magical beings (cryptids), and how cryptids stay hidden from humans (normals), I feel like there are a dozen explanations lacking. You need to pay attention because the author will describe what Joury looks like, or what kind of a magical being Jarvis is only once. For that matter, there’s a lot of fade to black scenes, whether in the womanizing, fighting, or the main mystery.

I think I might have liked the story better with someone like Luke Daniels narrating. The narration is flat, making it hard to distinguish between the multitude of characters. Moreover, the lack of emotion dulled down scenes that should have felt action packed, suspenseful or heartfelt.

But, then again, the writing glosses over fight scenes, having Doc kill with ease to the point I never felt he was in peril. The author makes excuses for a lack of thought out magic vs science system, constantly telling us that Doc just doesn’t understand either, as if that means we too should just accept magic rules, like how a magic pebble boosts power or that three people can walk away from a car crash at 80mph into a magic wall.

Having said all the reasons why this was a middle of the road listen for me, there were still things
I enjoyed enough to wishlist book 2 and wait for a sale. I liked the slow burn Legolas/Gimli banter and
kill-competition between Doc and Joury. Talking plant Thaddeus, who is both lush and a lush, grew on me (😜). And, the Constantine-ish feel of the hidden world of cryptids and the promise of creature-variety make me willing to give this new author a chance to improve from his freshman offering.