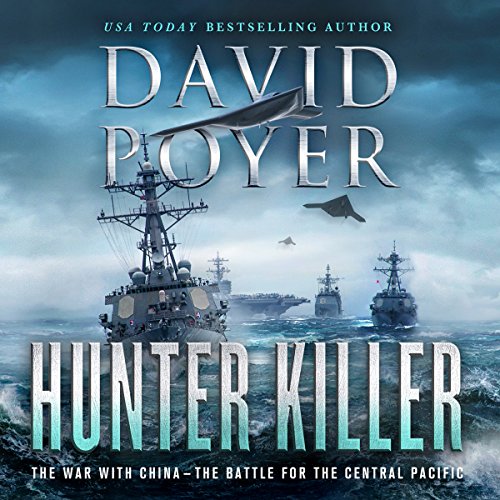 By: David Poyer
Narrated by: Gary Galone
Try for £0.00

Commanding a combined US-South Korea force, the newly promoted US Navy hero Dan Lenson wonders if his embattled group can possibly keep sea lanes open in the Central Pacific as he tries to turn the tide and buy time for the Allies to regroup.

But when his own flagship comes under ferocious attack, he must leave it to assume command elsewhere - without knowing when he'll be able to return. In the meantime, SEAL operator Teddy Oberg, escaping from a hellish POW camp, heads west through desolate mountains toward what he hopes will be freedom. And in Washington, DC, Dan's wife, Blair Titus, helps formulate America's military and political response to overwhelming setbacks in the Pacific and at home.

Filled with dramatic battle scenes from massive ship, submarine, and air warfare to desperate hand-to-hand Marine Corps combat - and informed by the author's own background as a Navy captain and defense analyst - Hunter Killer is a powerful, all-too-believable novel about how the next world war might unfold.

What listeners say about Hunter Killer

Disappointed - book ends half way thru the story

If you could sum up Hunter Killer in three words, what would they be?

What other book might you compare Hunter Killer to and why?

Somewhat like a Tom Clancy novel without all the background and detail information. The story moves along pretty quickly, foregoing details on weapon specs and strategies.

Have you listened to any of Gary Galone’s other performances before? How does this one compare?

No, but he is very good.

This book tells an interesting story about how WWIII starts and develops with the Chinese. You can see how this would happen given the world we live in today. Only problem is that the book ends half way through the story. The follow on book has not been written so you are left hanging for maybe a year until the follow on book is released. Note that this author has written many books but only 2 books are available on Audible so it is uncertain whether you will ever be able to finish with Audible.

At war with China

This is a continuation of the Dan Lenson series. Packed with action and adventure. This time he has finally made it to Admiral not because they like him, it's because he gets results. This is a scary scenario of what could happen in the future. Lack of supplies and missiles along with technology that is constantly changing. Hi tech warfare and the highly trained personnel that have to operate the systems.

Dark, Grim, Authentic, Can't Wait for the Next One

Would you consider the audio edition of Hunter Killer to be better than the print version?

Unknown; in general I prefer audiobooks.

The characters, situations, and plot arcs seem authentic and realistic.

Which character – as performed by Gary Galone – was your favorite?

"All due respect" to Gary Galone: learn how to pronounce corpsman, bo's'un, etc.

first time with this author and series, thought if was interesting and kept me coming back. Only two of the books in the series are available, wish there were more to get all of the story that lead up to this point. Might have to find time to read an actual book!

Not bad as a naval thriller. But I lost interest early on once the US response unfolded. If China ever nuked a carrier group, we would nuke right back and it would be full nuclear exchange in very short order. This novel crosses the line into upsurdity fairly early on. Good effort though and good writing. Narrator was very good respectable as well.

One of the greatest novels of its kind to ever be published. Loved every minute of it, despite early reservations.

The best part of the book arethe battle moments. The author is perhaps a bit overly descriptive, however, that may be due to my own experiences. He knows his weapons systems, and perhaps even better (and disturbing) is his characters whom are POW's. The inter-personal exchanges are awkward, but I am not here for a love story. Worth the time, worth the money and looking forward to the next, follow on book.

Impressive vision of war on our century

Can’t wait for the next one.
Hope we win and the world survives.
Great writing.