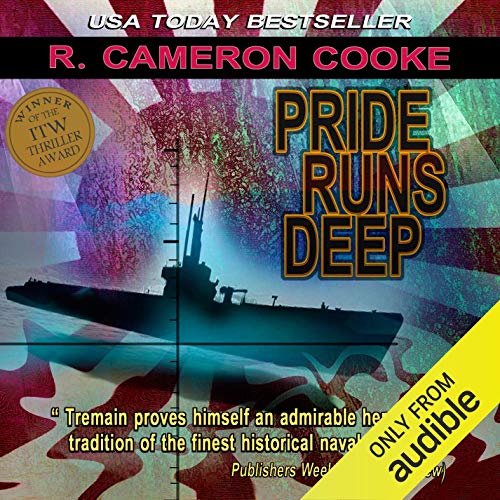 By: R. Cameron Cooke
Narrated by: Tim Campbell
Try for £0.00

Shattered by the surprise attack at Pearl Harbor, the U.S. is rebuilding its fleet while the badly damaged Submarine Division Seven holds the line against the Japanese Navy. The loss of even one more submarine could be devastating - and every enemy ship that slips through means more lives lost. But Lieutenant Commander Jack Tremain is determined to whip into shape a boat that's returned from a hellish patrol and make the Japanese pay - even if this is his last mission ever.

I started reading R.Cameron Cooke's submarine stories backwards. What I mean is that according to release dates, Wolf pack 351 was the most recent of his books within that genre and that was the one I read prior to this. This book features a different central character from Wolf pack 351, namely one Jack Tremain.

Interestingly, and something I like, this book has the story spread over two main characters, so we get to see two perspectives within the boat. The other main character from which we experience life aboard a submarine is that of Ensign Wright. The juxtaposition of fresh faced new officer and experienced sub commander is a nice touch. I wasn't aware of this at the time of reading Wolf pack 351 and in retrospect it makes sense that the author of this series of books was a former submariner himself. In my opinion, those are the people that write the best submarine fiction as they have an in depth understanding of submarines, how they work and their operations. This is put to good use here as the reader is taken on a tough journey of discovery as Ensign Wright is thrust into the unforgiving world of a submariner. As I read, I felt the man's dog tiredness, the unrelenting workload and constant need to learn as he worked towards gaining his Dolphins, the revered and respected pin worn with pride that marks a qualified submariner.

NOTE: Anyone interested in modern nuclear-powered submarine thrillers also written by a former submariner, then may I recommend the books by Michael DiMercurio.

The author's experience comes into play here in many ways and one I really liked was his knowledge of Pearl harbour and its layout etc. We get a real feel for the base, which was another nice touch.

As in Wolf pack 351, Tim Campbell narrates, so nice to have consistency here. Oddly, my only complaint about Campbell's reading of Wolf pack 351, namely his overly rapid delivery at times, appears not to be here.

Once the main plot kicks in, the pace is perfect. The sense you are there in the middle of the Pacific on watch for enemy aircraft is very well dne and the action set pieces are equally well delivered. Cooke doesn't spare us any gory details when the bullets and torpedo start flying, so be advised if you're of a more delicate disposition.

Cooke correctly includes the problems that plagued the U.S navy with the submarine launched Mk 14 torpedo, although the problem was two-fold and Cooke does not appear to mention the depth keeping fault. however, to be fair, by the time this story is set, maybe that aspect of the Mk 14's issues had been resolved, leaving only the problem of premature detonation and duds present to deal with. There's good overall historical accuracy here, although there are some glaring errors. To b fair, the only technical error I noted was the stated top underwater speed of the Gato/Balaao class boats as 11 knots. All sources I've seen state the max underwater speed was approximately 8 knots.

One tactical issue I had was how much periscope time the Captain had in broad daylight when close to enemy destroyers. I also felt that as soon as torpedo's were launched, he failed to move off track immediately to get as far away from the firing point as possible. he would linger to observe rather than down scope, move off track smartly and then worry about observations.

Also, there were some odd errors or quirks in the writing. Ensign Wright was driving a 1949 convertible in 1943. The love interest, Margie, is referred to as Margaret once. Is Margie short for Margaret? Also, how does one fold their arms "in front of their face" as the Captain did in the ward room in one scene when talking to the torpedo chief.

Oddities aside, I really enjoyed Pride Runs Deep and it's a very good insight into the world of the World War II U.S submariner and the brutality of war in general.

Where does Pride Runs Deep rank among all the audiobooks you’ve listened to so far?

This book is in my top ten books that I've listened to through audible.

It has many good characters but centres around the main two, the captain and the ensign.

What does Tim Campbell bring to the story that you wouldn’t experience if you had only read the book?

Although the narrator reminded me of the boss in 'Team America' it was narrated well and was easy to tell the different characters apart.

I really do hope Audible continue with this series.

This is a new author for me. The submarine USS Mackerel has returned to Pearl with three of its crew dead. The crew is demoralized. Our protagonist, Lt. Cmdr. Jack Tremaine, has been assigned to command the Mackerel. They go on patrol and battle with a Japanese escort ship as they sink a convoy ship. This return to Pearl is much happier than the prior return. Cooke describes the fear and difficult relationships of the demoralized crew as they slowly rebuild their confidence and team-ship. Then they get orders for what could be called a suicide mission.

The book is well written; the pace is fast. The action and suspense is nonstop. As the story develops there is an officer who is a bully, a new captain and a brand-new Ensign, Mr. Wright, aboard the boat. The author does a superb job describing what it’s like for the crew to submit to extended depth charges and the air turning foul. The author provides details about World War II submarines as well as information about life aboard a submarine. Cameron Cooke was a United States Naval submarine officer and that background allows him to bring reality to his writing.

The book is ten hours long. Tim Campbell does an excellent job narrating the book. Campbell is an opera singer, actor, voice over artist and audiobook narrator.

Could not turn my I-touch Off

If you could sum up Pride Runs Deep in three words, what would they be?

What was one of the most memorable moments of Pride Runs Deep?

When all looked lost a mine saves the day

Can not accurately describe how good of a job he did bringing this one to life.

This was the first fictional book out of my last ten that I just had to stay with and listened to it over a day and a half. The characters were inter woven well. Other than the expected Tre bravery at a key moment, the author kept me wondering what would happen next. I liked the style of making each character become the lead player at a moment in time. Overall a audible purchase of this book will not make anyone thing they made a bad choice.

Excellent!! I recommend this novel to everyone!

This novel kept me glued to the story. I have never been a fan of war novels or war movies, but I was absolutely intrigued and would be the first in line to view this novel on the big screen! It has all of the elements of a great novel.... Believable story line; mystery; great mix of characters; love interest... It was very well written and narrated. Thank you for indoctrinating me to submarine life. I also enjoyed hearing the author's statement at the end of the novel.

Very well done.... Cannot wait to listen to the next of the series!

This book is been both interesting and entertaining. It was purchased as an audible book.

The storyline was very interesting and the relationship between the characters maintain an interesting storyline.

Details of the action made picturing the scene in my mind very easy. I have always enjoyed movies and books about submarines. This was an action-packed novel which made me wanting to come back for more.

I recommend this book to anyone who has an interest in war novels especially those related to related to submarines.

Good characterization. Well constructed story and really liked the historical accuracy. It's also interesting to note how much is the same with today's sub community.

Great book
You can tell he has been there done that.
Real people with real lives. And how leadership really works. Similar to the movie 12 O'clock High.
I wish our elected leaders understood true leadership.

One Of The Good Ones

What did you love best about Pride Runs Deep?

World War II sub stories carry special forms of drama, from the cat & mouse game between destroyers and sub, to the interpersonal relationships of the crew, to the tedium and terrors of the task. Pride Runs Deep does nicely in all departments.

The telling factor for me is the "Oh boy," feeling I get when I return to listening after being away. This book has it. Excellent narrator - he never got between the listener and the story.

I am an avid fan of submarine stories both true and fiction. I enjoyed this book very much and the author's after note was a jewel. Performance by Tim Campbell was outstanding.

Absolutely couldn't stop listening to it. Action and suspense at every turn. Felt as if you could everything happening.

excellent narration.
i listened to it at 1.25 speed and enjoyed it.
whenever i was interrupted, I couldn't wait to get back to it.