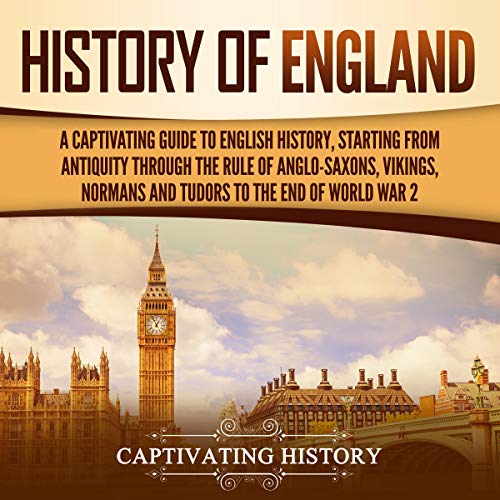 By: Captivating History
Narrated by: Kevin Hung-Liang
Try for £0.00

If you want to discover the captivating history of England, then pay attention...

There are few places that entice the imagination quite like England. Just a little island off the western coast of continental Europe, it boasts a rich history that stretches all the way back to the first modern humans.

Since then, entire societies have risen and fallen as people learned to make flint and bone tools, bury their dead, and fortify their cities against foreign raiders.

From the fearsome Celtic warriors of prehistory to the clever inventors and statesmen of the modern era, England’s story is one bursting with magnificent castles, complex kings and queens, rebellious peasants, and horrifying plagues.

Throughout history, more people have called England home than perhaps most of us have ever realized.

In History of England: A Captivating Guide to English History, Starting from Antiquity Through the Rule of the Anglo-Saxons, Vikings, Normans, and Tudors to the End of World War 2, you will discover topics such as:

So if you want to learn more about the history of England, buy this audiobook now to start listening!

What listeners say about History of England

Some things are wrong.

Aside from the narration being a bit monotonous, there are some things wrong. For example Roman emperor Claudius was not emperor Caligula's brother, but rather his uncle.

awful voice cracked my eardrums not recommendable. Not worth the money if you ask me.

Worst book I've ever listened to

The text is about the quality you would expect from a year 9 history assignment. The narrator is terrible. He is of asian decent and has either never heard a lot of names or just ignores how they are pronounced and comes up with his own. The worst is the ARC-Bishop of Canterbury, Anne Bow-Leen, Chamberleen.

Don't waste your time - its a waste of 3 hours

Reading this history of England shows just how much of modern fantasy books pull from English history. Amazing to see just how violent the past really was.

I enjoyed the book. I love history and this period of English history is not an area I am familiar with. The author is relentless in disparaging the Catholics and I suppose some would be put off by that. A good audiobook.

Really interesting and things in history I didn't know before. Pulls the entire history together.

Great overview of the whole history of the country and their monarchy. It is really good.

Great author from a different era, writing according to the knowledge available in his time.

Although history is very interesting, the text itself is the best part of this book: Hume could write about how to cook soup, still I'm sure he would make it worth reading. He definitely produced the best English texts I've ever read, this is a great example of his work and, although it is a history book, it reads as easily as the best romances do.

From the times it wads written, highlighting the general sweep of history as known then, but as Well as the prejudices and views of the authors own age.

Brought many new things to light for me regarding the early English and where they really came from. Some times confusing due to the use of the same names for different people. I realize they did this to show lineage. I recommend it for people who like a long read of early English history.