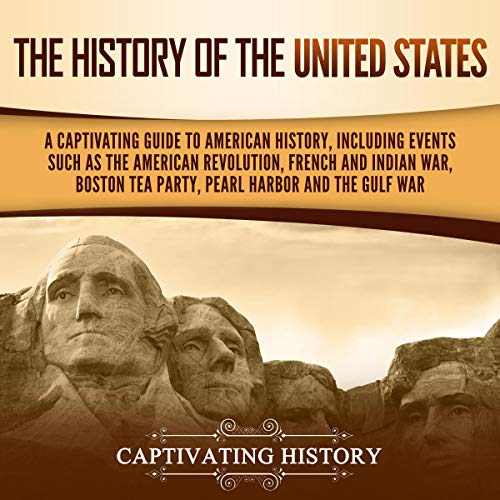 The History of the United States

By: Captivating History
Narrated by: Jamie Peters
Try for £0.00

If you want to discover the captivating history of the United States, then pay attention....

When the first settlers reached the United States of America and started to chip out a living in the wilderness that seemed so fierce and unfamiliar to their European eyes, they could never have dreamed that someday the land upon which they stood would become one of the most powerful countries in the entire world.

When the preachers of the Great Awakening stood on the backs of wagons or bits of old tree stumps and told the American people a new story of individual freedom and the power of ordinary people, they could never have dreamed that their preaching would trigger a landslide of abolitionism that would end in a civil war that almost tore the entire country apart.

As for Martin Luther King, Jr., he did dream. He had a dream of equality and brotherhood, and his dream at least partially came true in 2008 when America saw the inauguration of its first black president. Never could the slaves of the great plantations of the South have dreamed that day would ever come, but it did.

Nobody could have dreamed it, but it all came to pass, and it became the history of the United States of America. And this is how it all happened....

In The History of the United States: A Captivating Guide to American History, Including Events Such as the American Revolution, French and Indian War, Boston Tea Party, Pearl Harbor, and the Gulf War, you will discover topics such as:

So if you want to learn more about the history of the United States, then scroll up and click the "Buy" button!

What listeners say about The History of the United States

Totally loved it! Can’t wait for a repeat! Easy to listen BUT easier to understand and I learn by hearing so I was impressed!

The author covers well known historical facts but excels at the inclusion of more history of slavery, segregation, women's rights, racism, and other oft-neglected topics in US history books.

there's better out there.

this American history is for elementary school

Poorly written. Shallow take on history that misses broader themes and context that could have been included. Narration decent

Mark E. Bowser
Co-Author of “Some Gave It All” with Danny Lane (endorsed by Chuck Norris)

This was a decent brief history of the United States. I appreciated several key highlights including the French and Indian Wars and several other conflicts spanning into the 20th century.

I think one more hour explaining some 20th and 21st centuries conflicts outside of the Two World Wars, would have done this audio book justice would have been more sufficient.

It has taken many days of listening in small chunks.
Have entirely enjoyed listening to it and have learned a great deal, highly recommended!

A well-written tale that presents a exceptional overview of the many currents that form our tumultuous nation. I listened to a few minutes daily and took time to absorb author's wise perspective.

It is beautifully written.

Thank you author. I'm hooked.
I never enjoyed history class. This sight of our past is vibrant and thoughtful. I am glad I chose this book. It is beautifully written.

The writing is good

The writing is excellent, informative, relatively accurate from history books a couple of decades back.