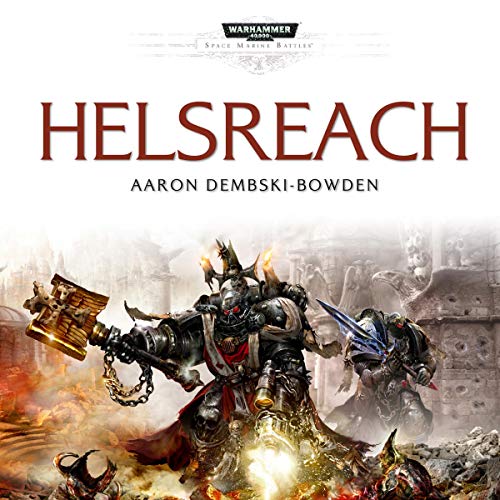 By: Aaron Dembski-Bowden
Narrated by: Jonathan Keeble
Try for £0.00

When the world of Armageddon is attacked by orks, the Black Templars Space Marine Chapter are amongst those sent to liberate it. Chaplain Grimaldus and a band of Black Templars are charged with the defence of Hive Helsreach from the xenos invaders in one of the many battle zones.

But as the orks' numbers grow and the Space Marines' numbers dwindle, Grimaldus faces a desperate last stand in an Imperial temple. Determined to sell their lives dearly, will the Black Templars hold on long enough to be reinforced, or will their sacrifice ultimately be in vain?

What listeners say about Helsreach

New to Warhammer books, but I enjoyed it a lot.

I bought this Audible title when it was the Daily Deal, and I'm glad I did. I was apprehensive buying it as I've not read any Warhammer books before had know knowledge of the universe and themes across the series. There were a lot of terms and references used that I didn't know, but they didn't make the book any less enjoyable.

I enjoyed the story a lot more than I was expecting, and it certainly doesn't follow a typical or predictable plot line you'd expect with a small outnumbered army defending a city against a huge invading army.

The performance from Jonathan Keeble is superb- I would probably say one of the best I've heard so far. He is perfectly suited to the story that he reads and does a fantastic job of it.

I would recommend this book.

Aaron Dembski-Bowden is an amazing author. His writing carries the perfect balance of action, suspense, character building and humour. The characters feel real, and are brought to life brilliantly by Jonathan Keeble, who performs each of them as the unique individuals they are. I would recommend this book to anyone and everyone.

Gritty from start to Finish.

Jonathan Keeble brought this to life with every character he portrayed, I fully and totally enjoyed the storyline from start to finish. You get to understand what it means to keep your Main Supply Route open and the consequences of it being closed off, completely. You can't help feel for the military and the Templars and what they try to achieve and for the populace for what they must all endure. A cracking good read, audio book I've enjoyed every bolt fired chapter.

loved it! Narrator was excellent showing a diverse range of characters. looking forward to the next space marine battles!

the cream of the crop

what do you expect, its grimaldus, jonno, and A A ton, excellent. the emperor protects

A great book with a quite sensational performance by Jonathan Keeble, the best I've heard.

The narration brings to life what is an incredible story.

One of the best 40k books I have listened to. The grimdark story, excellent voicing performance... Highly recommended.

Oh, I tried. I really did, but nothing could bring any life into turgid tripe - not even the usually excellent narrator. Between the author's manic search for every simile, metaphor and adjective possible and his determined effort to out-Tolkien Tolkien in inventing names, we descend into a confused and tortured "plot" looking for a purpose. Even poor writing can be pushed aside by a good story and skip along in spite of itself but this tale was drowned from the outset in its desperately self conscious struggle to sound profound. There isn't a single character in this who doesn't sound like a latin translation of a detergent brand. Can fantasy fiction writers just tell the story please, and call your hero John or Morris or Sid, for goodness sake.

This book was suggested to me by a friend when I asked which Audible Warhammer book I should begin with.
It did not disappoint. I was vaguely familiar with Warhammer 40k before beginning this story (I had primarily seen pictures of Space Marines etc.) and I was quickly drawn into the Universe with little trouble imagining the different characters, species, and machinery. The backdrop of this Universe is one of War on such an immense scale that it is difficult to understand, however this story takes the big picture and slowly focuses in from a planetary system scale to a single planet, to a continent on said planet and finally focusing on the defense of a single city. In doing that, the reader receives the feeling of both the grand scale of a star systems at war all the way down to individuals in hand to hand combat trying to survive and claim victory over seemingly insurmountable odds. While listening, I as the reader was unsure as to which characters were going to survive and indeed if ANY would survive. The character development was nuanced but well done and with enough humor to release the tension when needed.
The voice acting was well done and added to the war type atmosphere that was ever present throughout the story.
All being said this was a great introduction to Warhammer 40k and I plan on listening to more in the future.

This book is one of the greatest 40k books in the series, I highly recommend this book to any fan of Warhammer 40k.

Bowden's writing brought to life in only the way Keeble can. Road by bloody road the forces of Hellsreach are beaten back. Yet they stand. Until the end.

If you could sum up Helsreach: Warhammer 40,000 in three words, what would they be?

What other book might you compare Helsreach: Warhammer 40,000 to and why?

Betrayer. Because it's the same author and also a great story.

Have you listened to any of Jonathan Keeble’s other performances before? How does this one compare?

I've listened to a lot of Jonathan Keeble stories and this is one of his best.

I highly recommend this audiobook. the narration is great and the struggle throughout the book makes for a great story

Black Templars at their finest.

A story of sacrifice and courage in a universe where there is only war.

Black Templar Space Marine fans will enjoy this read - well worth the time and coin.

probably one of the best 40k stories out there, unlike many others in the wh40k lore there is actual character development, it keeps the very real feeling of war prominent throughout the book, and the ending is actually worth something. worth the read.

My first, and last, Warhammer novel

Based on positive reviews for this book, I thought it would be a good starter novel to get my toes wet in the Warhammer universe. The plot was engaging, the backstory was deep and rich, the narration was fantastic. I can see why so many people love Warhammer and this book. The problem for me was, to get really engaged in this story, I needed to get caught up in humanity's future holy war. But I saw nothing holy about humanity. I felt no draw to side with the humans rather than the orks. Why was humanity "clean" and "holy" while the orks were "vile" and "abominations"? The orks appeared stupid, unsanitary, and vicious, but was this enough to warrant their eradication? A war appealing to humanity's biological fear of death would make sense. to me A war fueled by God-centered linguistics and reasoning, but with no God (at least that I could find), seems as regrettable to me as humanity's historical Crusades in the Holy Land.

Oh boy! It had my attention all the way.

The narrator Jonathan was very good.
Loved the fact that the Orks are depicted as the true warlike monsters they are and not comic relief. The threat is real. And that the ordinary soldier fights just as hard as the superhuman warriors.