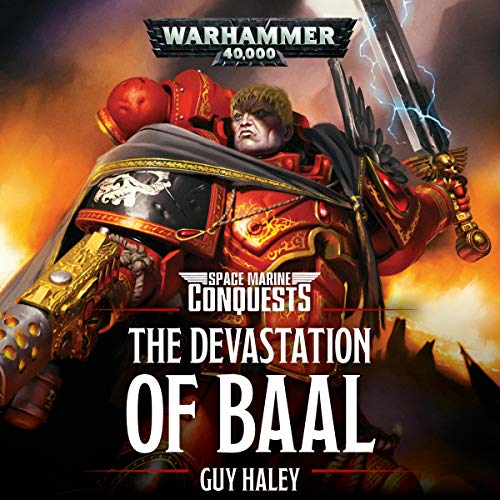 The Devastation of Baal

By: Guy Haley
Narrated by: Gareth Armstrong
Try for £0.00

The Blood Angels Chapter of Space Marines is under threat. Having obliterated all human life in the Red Scar region of space, the largest tendril of Hivefleet Leviathan ever seen in the Imperium has converged and is making relentlessly for Baal.

To face this awesome foe, Commander Dante has called upon the Successor Chapters of the ancient Ninth Legion. The Sons of Sanguinius gather in numbers not seen since the dark days of the Horus Heresy. Thirty thousand Space Marines stand ready to thwart the Great Devourer, save the homeworld of their primarch, and prevent the consumption of billions in the Ultima Segmentum beyond.

But the tyranid swarm numbers in the trillions, and they are not the only danger to the chapter’s future. As the galaxy slides toward a terrifying new era, events far away threaten to unleash a greater evil. A further enemy must also be overcome, that of the Black Rage that lurks in the souls of all Sanguinius’ bloodline.

What listeners say about The Devastation of Baal

I’m a fan of the Blood Angels, but I think anyone who enjoys tales of Astartes, and flawed ones, will enjoy this. Dante is an intriguing character and the tension between the autonomous chapters is portrayed really well here. The Tyranids and the threat they pose are brought to shocking life and Guy Haley has done a great job with pacing and description, showing the slow, but seemingly inevitable, defeat of the Blood Angels. Great ending which, surprisingly for 40K, leaves you feeling hopeful. Worth listening to for anyone looking for some action while advancing the story into the 42nd millennium.

Guy Haley writing and performance by Gareth Armstrong brought me to the edge of my seat and to the brink of tears, this story adds so much to the advancing narrative of the 40k IP.

This book takes care to explain aspects of the astartes and the tyranids in detail without hindering your enjoyment. The set pieces feel suitably epic while more subtle aspects of the story are also captured. Highly recommended

Second book in Dante trilogy and a bit different from the first but a very strong writing and performance make for an enticing book.
Perfect to discover what's happening in the modern era of 40k

You got to get this story! :-D

I enjoyed every second of this!
You will not be disappointed and I highly recommend listening!
The build up is slow but done in a good way.
The battle is just intense as it is amazing.

Gareth really needs to control his tone and pacing. several times the tone of a character just changes mid sentence. and for some reason mephiston is this super flat and nasal guy. what?

Narrator is OK when he isn't performing his character voices. in particular Mephiston sounds like an irritating whining old pensioner... Not the Lord of death!!

what story! Dante is my hero!

really good. learned a lot. good background on the 'nids and Blood angels. details help fill out what happens in the 40k universe and why.

and Dante, what a guy!

Chapter 30 is missing which is the epilogue!! This audio book is incomplete. I have no idea if this is intentional.

I would have rated this all 5s, but it's missing the final chapter, one that is fairly important to the overall story. Especially annoying, since it's advertised as being "Unabridged".

Well versed in the Warhammer 40K lore and this book added to my knowledge about the sons of Sanguinius. Great story and characters. A lot of reviews said the book was missing the last chapter, but mine included chapter 30 so I believe Audible fixed the issue. Definitely worth the listen.

The Story is amazing Chapter 30 has been added, I know some reviews were saying it was missing but the complete book is here and it is worth every minute. I would highly recommend the book Dante as well it is a great back setting or prequel to this book.

I enjoyed it, but it was a real bummer when Audible didn't include Chapter 30. WTF?

Well written and narrated; but sadly missing the 30th and final chapter. Despite being advertised as the unabridged version.

i loved reading this book but i was disappointed when listening to it to find that the full ending is not there... it ends early and leaves out a huge plot point with the Flesh Tearers

Good, but missing the last chapter.

This is missing the last 2 chapters. Rating 1 star until this is fixed. I listened to the whole book just to find out the very end is missing....

It was fantastic, regarding previous reviews complaining of missing chapters. This has been seemingly fixed.