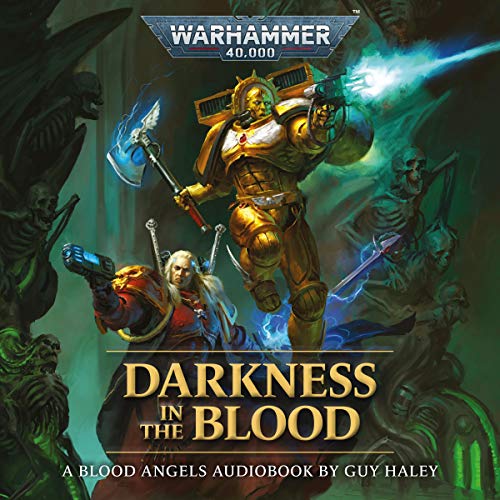 Darkness in the Blood

Baal has been saved from the tyranids, yet the Blood Angels' greatest challenge awaits them. Reinforced by the new Primaris Space Marines, Commander Dante has been made warden of Imperium Nihilus. But to save the shattered Imperium, he and his brothers must first defeat the darkness within themselves.

Listen to it because: after the Devastation of Baal comes the next great test for the Blood Angels - rebuilding their broken empire, even as their broken souls threaten to overwhelm them.

The story: the galaxy is in flames. Chaos is in the ascendant across the stars. The Great Rift has split the holdings of the Imperium in twain, isolating entire sectors from the light of Holy Terra.

But all hope is not lost. The Primarch Roboute Guilliman has returned from deathless sleep and appointed Commander Dante, lord of the Blood Angels, as Regent and Warden of the newly dubbed Imperium Nihilus.

In the Baal system, the shattered holding of the Chapter is being rebuilt, and Dante plans the greatest campaign of his long life, to retake half an empire. And yet at this moment of rebirth there are dangers close to home that could overwhelm all those who carry the blood of Sanguinius in their veins, stopping Dante's noble endeavour before it has even begun.

The Flaw in Sanguinius’ sons is growing. As the twin curses of the Red Thirst and the Black Rage threaten everything, the hardest ordeal will fall upon Mephiston, twice-born Lord of Death and Chief Librarian of the Blood Angels. Among the mighty lords of Baal, perhaps only he can save them all, by mastering the darkness in the blood....

What listeners say about Darkness in the Blood

Great but not on the same level as DoB or Dante

very enjoyable because I love BA and I like to know what there up to in the lore! some good writing and some good narration, but not as gripping as DoB and feels like it has less depth than Dante.

this review can be summed up in five simple words:
just read the book now!!!!

I won't go and spoil anything but the book touching on the very real risks of the Primaris rubicon is a very nice touch to an already brilliant book.

much better reader than before!

finally a reader that can do space marine voices. in the other blood angels books mephistons voice is just bad. this one was much better!

Dante is now my favourite character in 40k,great main story and some great background stories from Dante really adds a level of humanity to the character that is usually absent in space Marines. Delivers a great monologue on the subject of Duty and command. Well worth a listen 👌

that book is amazing as a blood angles fan I recommend it highly to everyone!

the first few chapters contain a lot of different characters and scènes, which makes it a bit slow to get into.

after a while these various storylines are neatly woven together in a story that gives you more insight in why Dante en Mephisto act the way they do.

Fairly good. Should have been longer

Hard to keep up with Dante and the Dvestation of Bal, but still interesting. Hayley really brings something to the Blood Angels, in the way Chris Wraith put the Scars on the map in Horus Heresy.

The minute I heard an American accent instead of an unoriginal redone british/heroic accent I came here. this is the best voice acting ever. not cause america but because original voices for characters. see?
ding ding diggly doo

Guy Haley is one of my top 3 writers for Black Library, which is why it pains me to write this middling evaluation, especially since Dante and Mephiston are two of my favorite characters from one of my favorite legions.

First, the performance was excellent. I only picked out 1 or 2 missteps the whole book, that is rare! The voices were evocative. Aside from the Flag Lieutenant which was inconsistent, great!

Secondly, and most disturbingly, this book embraces complete moral relativism at 2 major fulcrum points 4/5ths of the way through the story. This was both anticlimactic and cheapened the 2 major characters painfully.

It was like wine with a weak, thready finish. It was entirely unsatisfying. It cut the purpose from both characters.

In order to combat something bad, you need something, not nothing. I kept waiting for the admiral to follow up with the rational next step, but Guy Haley skipped reason here. . . which sucks. . . and is NOT HIS USUAL AT ALL.

Third, the story pacing through 80% of the book is great. . . then it's not. The end is clumsy, with poor proportion. I don't know why.

Fourth, as a fan of the 9th, why was Astorath written so thinly?

This is probably the worst writing that Guy Haley has put out that I can remember, which confuses me.

This was really disappointing.

A book about nothing. Skip for another book. Voice acting for a few characters was unbearable. Juvenile in particular

So close but this falls short of the Dante series

This book came close but ultimately failed to be as good Dante or Devastation of Bhaal. This reeks more of a cash grab than an inspired tale.

I was incredibly excited to pick this up after the excellent and thrilling Devastation of Baal, also by Hayley. Unfortunately, where DoB was heavy and driven, Darkness in the Blood meanders between action scenes that feel forced to sell models (particularly those scenes involving Mephiston). The Angels are an incredible chapter, and it’s a shame to see so little accomplished in an 11 hour audiobook. Richard Reed was at least as awesome as ever.

Whole thing is a medical drama about whether or not Mephiston will survive becoming primaris or not. SPOILER ALERT: He does! Judging by the fact that this came out like a year after his new model this should surprise literally no one.

Can't wait to tune in for Darkness in the Blood part 2: Dante Boogaloo to coincide with his new model release!

Have yet to see a single example in the new books of why primaris marines were necessary or even cool, keep hoping they are going to walk it back and just say "hey just kidding, primaris is just a new armor type as an upgraded model that we released because all the new chaos models are a head taller than tacticals and we did not in fact just make the heroes from the past 25 years obsolete" but when they make an entire book about the surgery that possibility seems more and more unlikely.

Solid Entry into the happenings of Nihilus

Overall pretty good look at the situation on the other side of the great rift. Dante and Mephiston are always interesting characters to follow. Didn't care much for the resolution to the Admiral's PTSD subplot but the rest of the book gives a prime look at the first Blood Angel to cross from Astartes to Primaris and sets the scene for what's happening across Imperium Nihilus and how Dante and friends are handling things.

Loved this book. Guy Haley keeps developing the blood angel perfectly. The Narrator has a wide range of voices, but he shines when he does narrations. If you are a BA fan, this is a must. Dante's speeches are inspiring.

fun and exciting .A good in depth look at the blood angels lore .

You know how in other 40K books Jon grimmaticus sounds like the most annoying pompous ass? A different character has the same voice and I do not like it. Great story with lots of action narrated in a strong way by Reed.