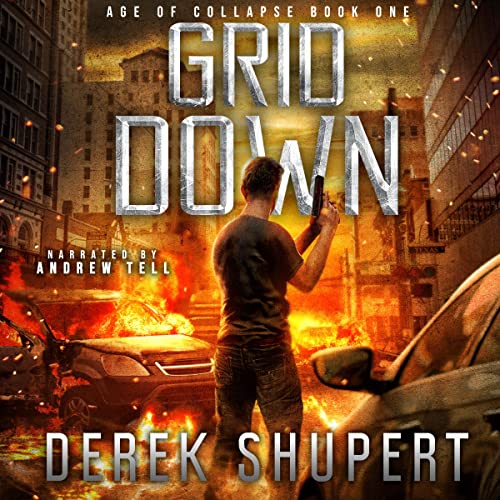 By: Derek Shupert
Narrated by: Andrew Tell
Try for £0.00

When the lights when out....

Was this his chance?

Nobody was sure who took down the power grid in Texas, but from the moment it happened, Alex knew it was his chance to escape. Four months into a four-year sentence for armed robbery, Alex had barely survived Huntsville Prison. Worried about Wendy and desperate to make things right with Vargas, the mobster his old partner, Trey, stole from, he needed to breakout.

During the madness that followed....

He wasn’t prepared for the outside.

Motivated to find Trey, get Vargas his money, and protect his daughter, he set out through the new world that was like something out of an apocalyptic movie.

All that stood in his way were roving gangs, looters, angry mobsters, and about 60-miles of insanity between him and Trey.

Could he fight his way through?

You’ll love this near future post-apocalyptic thrill ride, because we are all much closer to a lawless society than we know.

What listeners say about Grid Down

this individual should seriously consider another career. Fiction writing is not their best choice. Unbelievably poor writing. About a 1 out of 10.

This first in the series has me ready to go to the next book. Fast paced edge of your seat post apoc story. Very realistic. The characters having to fight there way home after the grid goes down . Starting book 2 immediately. Excellent exciting and scary story. The author has my attention.