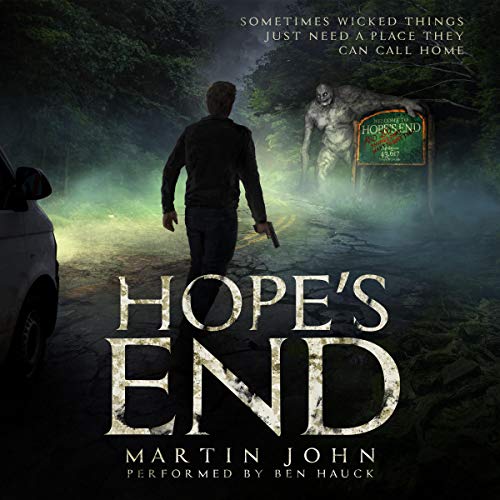 Noah Wild was never a great cop and some would say he made an even worse thief. But after surviving a surprise encounter with a demon, he is recruited by a secret organization called The Switcher’s Guild.

Underfunded, undermanned, and up against an enemy infinitely more powerful, the Guild is fighting a war they cannot win. Yet there may still be hope, for they believe Noah has a talent not even he is aware of.

Their battle brings them to Hope’s End, a town that attracts bad things like moths to a flame. Monsters lurk in the shadows and behind closed doors; malevolent beings plot our downfall. For a decade The Switchers have managed to contain this evil from the rest of the world. However, something terrible may just be ready to break free. Only Noah and a ragtag team of Switchers have a chance of stopping it.

Woefully underestimating the danger of the mission, he quickly finds himself out of his depth, fighting monsters and mutants at every turn. This hapless rookie soon comes to realize the fate of all mankind may very well rest on his inept shoulders.

What listeners say about Hope's End

a first for me

loved the narrator! the storyline was great. i dont prefer audio books and maybe that was my struggle. if i had read it maybe i would have absolutely loved it. as it is now i finished it and i never do that with audiobooks!! the main character is funny and it seems to lead into part 2 . I'll probably read the next book in the series since I would like to know what happens. have fun reading!

Netflix needs to get on this!

BUT this is one of the most clever, engrossing, and immersive works of fiction I've been entertained by.

The author manages to blend together a wealth of Atmospheric Horror, Humour, Action, as well as a looming sense of dread! This felt so comfortably familiar, yet different from all the shows, movies, anime, games, etc etc I've seen

The Characters, Monsters, Story, and overall world building is so well done, i found myself on edge FILLED with anxiety not only because of the frighteningly delightful descriptiveness, but also the SUBERB narration, the narrator absolutely put his best foot forward!

I've used audible on and off, but this has sucked me into the world of books, and I truly look forward to reading/listening to more from not only this series, but author, AND narrator!

I'm absolutely gushing over this, and love that I was able to stumble across it!