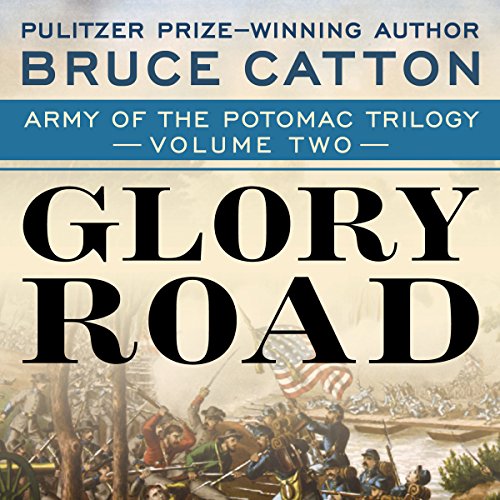 By: Bruce Catton
Narrated by: Kevin T. Collins
Try for £0.00

The riveting saga of a nation at war with itself - from the Union Army's disaster at Fredericksburg to its costly triumph at Gettysburg - by Pulitzer Prize-winning Civil War chronicler Bruce Catton.

In the second book of the Army of the Potomac Trilogy, Bruce Catton - one of America's most honored Civil War historians - once again brings the great battles and the men who fought them to breathtaking life. As the War Between the States moved through its second bloody year, General Ambrose Burnside was selected by President Lincoln to replace the ineffectual George "Little Mac" McClellan as commander of the Union Army. But the hope that greeted Burnside's ascension was quickly dashed in December 1862 in the wake of his devastating defeat at Fredericksburg.

Following Burnside's exit, a mediocre new commander, Joseph "Fighting Joe" Hooker, turned a sure victory into tragedy at Chancellorsville, continuing the Union's woes and ensuring Robert E. Lee's greatest triumph of the war. But the tide began to turn over the course of three days in July 1863, when the Union won a decisive victory on the battlefield of Gettysburg. Months later, Lincoln would give his historic address on this ground, honoring the fallen soldiers and strengthening the Union Army's resolve to fight for a united and equal nation for all of its people.

With brilliant insight, color, and detail, Catton interweaves thrilling narratives of combat with remarkable portrayals of politics and life on the home front. Glory Road is a sweeping account of extraordinary bravery and shocking incompetence during what were arguably the war's darkest days.

What listeners say about Glory Road

Have listened to both volumes of Bruce Cattons Army of the Potomac trilogy and looked forward to the third - however due to copyright restrictions it is not available to UK members!!!
Interestingly all 3 volumes are available on kindle with whispersynch in US. I'm sure the difficulties are not insurmountable.
Come on Audible....

Bruce Catton books are wonderful reads but why would the audio book producer hire a talent that cannot properly pronounce names is maddening! Additionally, this reader has the horrible habit of over enunciating every word and sounds as though he began reading after climbing ten flights of stairs. Great story but awful talent! Word of advice to the producer, spend a little extra next time and get better talent.

Shelby Foote's The Civil War is excellent. Bruce Catton's Army of the Potomac is even better. Highly recommended.

Have to return this one -

I am a fan of this author - one of the best historians of the Civil War; but the narration is extremely poor. I can’t bring myself to listen to it - I’ll have to borrow the book in print at the library. Very sad!

This is the second volume of the series. Excellent

Catton masterfully distills details of the development of the Civil War on the eastern front. This book is worth the price on his description of Gettysburg and stops right as Lincoln is about to give his address months later.

A great civil war history by a great author almost destroyed by a terrible narration. I wish some of these readers would not perform lilke they are reading script and performing especially when they cannot. It is Audible books like this that will drive me back to reading the book. I followed by GRANT GOES SOUTH and the narration was a breath of fresh air. Also,, I still think it is not ROSEYCRANS, This is not the fault of the reader but the producers who do not know the subject. I will not listen to any book narrated by Mr. Collins again.

I've never had a greater sense of being amount the men of the Army of the Potomac then this series of book.