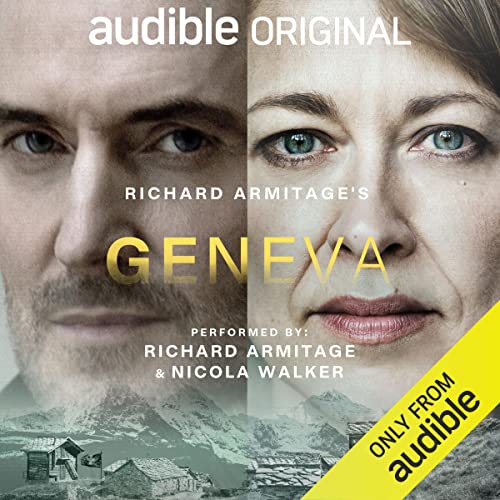 "Geneva is one of the best thrillers I've ever read. And I've read quite a few." (A J Finn)

How far would you go for someone you love?

Nobel Prize-winning scientist Sarah Collier has taken a step back from work to spend more time with her family. Movie nights with her husband Daniel and their daughter Maddie are a welcome respite from the scrutiny of the world’s press. As much as it hurts, it’s good to be able to see her father more too. He’s suffering from Alzheimer’s and needs special care.

Sarah has started to show tell-tale signs of the disease too. She’s been experiencing blackouts and memory loss. It’s early days but she must face the possibility that she won’t be there to see her daughter grow up. Daniel, a neuroscientist himself, is doing his best to be supportive but she already knows that she will have to be the strong one. For all of them.

So when Sarah is invited to be the guest of honour at a prestigious biotech conference in Geneva she declines, wanting to stay out of the public eye – that is until Daniel shows her the kind of work that the enigmatic Mauritz Schiller has been developing.

Flown first class to the spectacular alpine city and housed in a luxury hotel, Sarah and Daniel are thrust back into the spotlight. As they try to shut out the noise of the public media storm, in private Sarah is struggling with her escalating symptoms. And the true extent of what Schiller has achieved is a revelation. This is technology that could change medicine forever. More than that, it could save Sarah’s life.

But technology so valuable attracts all kinds of interest. Wealthy investors are circling, controversial blogger Terri Landau is all over the story, and someone close to Schiller seems bent on taking advantage of the situation for themselves. Sarah feels threatened and does not know who to trust – including herself. Far from being her lifeline Schiller's technology may be her undoing.

As events spiral out of control Sarah and Daniel are faced with the ultimate question: how far would you go for someone you love?

This book contains scenes pertaining to dementia that some listeners may find distressing.

What listeners say about Geneva

This has drama, suspense and a quite disturbing plot twist - I am now listening for the second time with a quite different perspective on what is really going on.
It also has episodes of tenderness, thoughtful reflection and sensitivity that I felt came from his heart and from personal experience. He had me in tears a few minutes in, and the care home scenes will ring true with many more readers.
I was completely drawn in by the strong storyline, the interesting characters and some beautifully descriptive and evocative passages that transported the listener to the location.
The narration by all 3 readers is superb.
As I write, this audiobook has been the number 1 bestseller in the UK since early today, (on its day of release) and is only getting 5 star reviews so far - that reward is well deserved. i can't recommend it highly enough. I have to congratulate Richard on such a magnificent first novel, and look forward to more from him as an author.
Sadly, there is no accompanying print or ebook version as yet, so the novel is not accessible to everyone. I do hope this oversight will soon be rectified, as it deserves the widest possible audience.
I also look forward to a screen version that is apparently being considered.

Richard has done a fantastic job of this book, I'm looking forward to the next. Nicola Walkers narration was fabulous as was Richards. The story was gripping and very emotional. Well done to all involved x

I’ve listened to a lot of books he has narrated and now to listen to something he has written, is wonderful.

Really enjoyed it, looking forward to his next book.

Devoured in one sitting

What a journey, I couldn’t stop listening. The performance was enveloping, like I was in the story walking alongside the characters.
I particularly appreciated the nod to our experience of ‘reality’ and all the chaos it can bring up for us in times of uncertainty and desperation.
Cracking debut! Looking forward to reading more from Richard Armitage

Great vo artists but truly awful plot. Unbelievably predictable and cliche. really disappointed that amazon won't let me return this since I purchase multiple annual memberships every year because I have problems with eyesight so audible is usually brilliant.

I listened to this in a day. Well developed characters, kept you guessing & thoroughly enjoyed it.

You had me at Barnsley!

Loved every second! Fantastically written, it’s engaging from the get go. Being a resident of Barnsley and married to a staunch Barnsley FC fan, the line describing Sarah’s Dad launching the bowl of muesli made me laugh out loud! I usually listen to books whilst out walking the dog but this one had me listening the whole day. The narration was perfection, I think knowing both actors from their previous works made the story all the more real, placing a face with the characters enhanced the listening experience. WELL DONE Richard Armitage on a fabulous debut novel…I hope it’s the first of MANY.

A great debut for Richard Armitage as a writer! A mind blowing story, full of pathos, science, feelings and action...and twists! And a superb narration by Armitage himself and Nicola Walker, they made me SEE the story. Congratulations! I hope we'll see a second book quite soon... 🤞🏻

Thrilled that my hands-down favorite Audible narrator and one of my absolute favorite actors wrote a book, and that it’s such a great yarn! I finished it within two days—couldn’t stop listening. I also adore Nicola Walker—so glad she could be a part of this project. Congratulations, Mr. Armitage, on your new endeavor as an author. Hope to “read” more from you in the future.

An amazing and interesting debut for Richard Armitage as an author.
The story is captivating and the narration makes it even better. Every character is interesting and the situations make you doubt who and what you believe.
Exactly what was promised.

I make a point of participating in this new and wonderful journey of Richard Armitage participou and I have not regretted it, as the narrations bring us a fantastic and engaging story. Congratulations Audible, Richard Armitage e Nicola Walker. Bel Mendes, Porto Alegre/Brazil. 10/20/2022 (And look, I don't understand English very well, but I have an English friend -Philip de Lacy White - who helps me understand the text completely. Suggestion: could have a written text resource with translation in some languages ​​that would be read along with the audio (must include Portuguese of course!). Marking the narrated passages in the text (song app type when playing the songs chosen by the listener, but also with the option of choosing the language to be translated). If I'm already in love with the book and need help to listen, imagine putting together audio in English and reading in my mother tongue!!!)

Loved this book! Couldn't put it down! Actors were fantastic! Richard Armitage is multi-talented!

That was fabulous!! My only complaint is that Richard doesn’t currently have more books written. Please write and create another one. In the meantime, I’ll listen to it again and again.

This audiobook moves quickly and keeps the listener in suspense throughout. The characters are well-drawn for this genre, especially that of the heroine, Sarah, beautifully performed by Nicola Walker. Armitage does his customary good job as co-narrator, and Jane Perry shows off his writing talent and helps liven up the action. Let's have more from Mr Armitage!

Clear your schedule; this draws you in!!

The story has great twists and turns, and is perfectly descriptive. Not a word is wasted! It feels like you’re watching a film because the performances really energize your mind’s eye. (Hint to Hollywood: this should also be on screen…ASAP!) Can’t wait to see what Richard Armitage writes next!!

Mesmerizing. Couldn’t put it down!

Once I started I couldn’t stop listening. Intriguing story line. Beautifully performed. Loved how the story kept switching from Daniel to Sarah’s POV. Will be listing again!

This doesn’t disappoint! Excellent narration by two of the best! Highly recommend this read/audiobook!

This is one of the best thriller I have listened to this year.

The characters are well developed and the story flows nicely.

The narrators are fantastic!