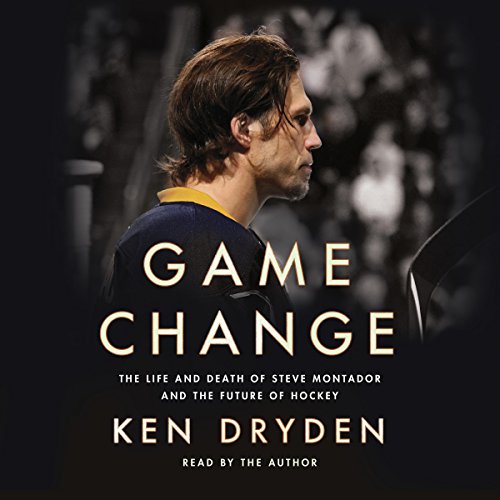 From the best-selling author and Hall of Famer Ken Dryden, this is the story of NHLer Steve Montador - who was diagnosed with CTE after his death in 2015 - the remarkable evolution of hockey itself, and a passionate prescriptive to counter its greatest risk in the future: head injuries.

Ken Dryden's The Game is acknowledged as the best book about hockey and one of the best books about sports ever written. Then came Home Game (with Roy MacGregor), also a major TV series, in which he explored hockey's significance and what it means to Canada and Canadians. Now, in his most powerful and important book yet, Game Change, Ken Dryden tells the riveting story of one player's life, examines the intersection between science and sport, and expertly documents the progression of the game of hockey - where it began, how it got to where it is, where it can go from here, and, just as exciting to play and watch, how it can get there.

What listeners say about Game Change

This is the wonderful, moving and highly informative story of Steve Montador but also of the history and development of the game of hockey and of the future of players at risk of injuries. The book talks about what happens to the players once their shift has ended and after they have given so much to their teams.

It left me in tears more than once. I grew to care greatly for Monty and his tragic story was incredibly well written. This is a fantastic book. Cannot recommend this highly enough.

Ken as ever narrates in such a way that you just have to hear what he has written next. Extremely well researched and written this story mixes the life of a player with scientific fact, the history of hockey with opinions on how it could change for the better and the politics of the game and those in charge. This book was engaging from the start and the narration was brilliant. We knew the end would be sad but it was delivered in a way that it was part of an investigation with a point to it rather than just an account of a players sad end.

It’s difficult to describe how important this book is to me. As a lifelong hockey fan, former player, and as someone currently recovering from a concussion; this has allowed me to hear perspective on my favorite sport and allow me to feel a level of comfort about my condition that I didn’t think was possible. Mr. Dryden is an impressive author and his narration is incredibly engaging.

Compelling story, worth a go. I need fifteen words, so you should get it right now.

Must read for Hockey fans. Ken does awesome job as narrator. Ken’s knowledge of hockey and the NHL was great to learn.

Hockey fans will love this book. Everyone who reads this will learn about the passion and motivation that drives the players. You will also see that the league is working to prevent brain injury. Hopefully anyone who has assumptions about the sport will read this.

looks at the personal side

you've heard the science behind CTE, you know it exists. you've seen the sad stories of football. but this takes it to another level. it shows the effects of head injuries and concussion more personally. it shows how the game of hockey has developed over time. how it could be fixed to make it safer, in ways that football cannot. it asks the question is why.. why does it need to put players at such risk? it shows how effects build up over time. if you want a really good illustrating of how concussion impacts plays, this is the one to read. I'm sure it's have gotten more out of our of I knew hockey, knew the players he's referencing . but not knowing them, I still got a lot out of the book.

An Important Examination of Brain Injury

Although the story starts slowly, Dryden does an excellent job of recounting the details of Steve Montador’s life in and out of hockey. The interviews with many of Steve’s closest friends and family members bring Montador’s triumphs and struggles to life in poignant fashion. Ultimately, Dryden pivots in the end to an insistence that Gary Bettman address the issue of head trauma in hockey, something Bettman has been stonewalling to date. Steve Montador’s story is not an isolated incident. Dryden succeeds in making the reader feel the loss of a fine human being while exhorting those in power to make the changes to the game that will minimize future issues with brain injury in hockey. Hockey is the greatest game on earth, but it needs to address this critical issue now.

You Will Think About Hockey Differently

Ken Dryden is a master! This is my third book by him and I can say no one can articulate an understanding of Hockey better than him. In this book he draws you into the life of Steve Montador so much that you feel so much about his ups and downs. Dryden mixes science behind brain injury and lessons of Steve’s life to make you realize the issue, who it affects, and why things should and need to change.

Hockey, for the casual fan – the guy who catches the highlights while at the bowling alley bar or tunes in for a period when the local team hits the playoffs – can be defined by one all-encompassing element of play: the fight.

That diehard fan? Fighting, save for the occasional benches-clearing melee that lasts the entire third period (like that unforgettable Flyers/Senators brawl from 2004), is passé and even a time waster. For the diehard, it’s all about the speed, the slapshot, the butterfly save, the hat trick. The play and the score are what truly matters. And Ken Dryden, former Montreal Canadiens goalie and Maple Leafs president, now author, would agree. With his latest, Game Change, Dryden skates deep into another issue: concussions that come as a result of body checking, and yes, fighting.

Game Change is an entertaining, enlightening read. The book is also an important one, and topically so. In Game Change, Dryden explores the life and career of Steve Montador, an everyman defenseman who played for six NHL teams and whose career ended as a result of multiple concussions. Montador died in 2015 after suffering from the effects of chronic traumatic encephalopathy, a degenerative brain disease commonly known as CTE, an acronym anyone who saw the Will Smith movie Concussion should recall.

Dryden cleverly disguises his treatise with an enjoyable look into hockey history, how the game started, and how it has evolved. Within is also Montador’s story: how he played, how he trained, and most importantly, how he loved the game. Yet, similar to the fighters and goons of the game, Dryden does not pull any punches as he throws down his gloves to present his call to arms: no hits to the head. No excuses.

Dryden writes like a hockey player. His sentences are short and clipped, he often repeats highlights he finds important to ensure the reader takes notice. He is also passionate, writing from the heart, even when he is talking about the mind. To do so, he presents interviews not only from scientists and doctors who share his philosophy of changing – and only slightly at that – the game of hockey to preserve the quality of life for the player, but also talks to players. Former Bruin Marc Savard, Flyers captain Keith Primeau, and someone named Sidney Crosby all share their stories and fears and recovery from post-concussion syndrome, how it has changed their play, and their lives.

Game Change is written for the casual fan, but the diehard will enjoy the deep cuts. More importantly, and even more important than hockey, the respect for life offered within is shown as a universal constant. That players, with their athleticism, their passion, their talent, are much more than just a product. Theirs is a life that should be cherished and celebrated. Dryden believes that is a constant on which everyone can agree. Unless, of course, you are NHL commissioner Gary Bettman.

Ken Dryden my favorite writer, narrator by far. A subject that needs further investigation and financial backing. Gary Bettman needs to be pioneer on this subject or investigation to ignoring the health of this awesome sport of hockey....

Ken Dryden's "Game Change" deals with CTE and it's devastating impacts. Insightful and heartbreaking. Mr Dryden's narration is excellent and his perspectives and prospective solutions very much worth hearing. Exceptional!