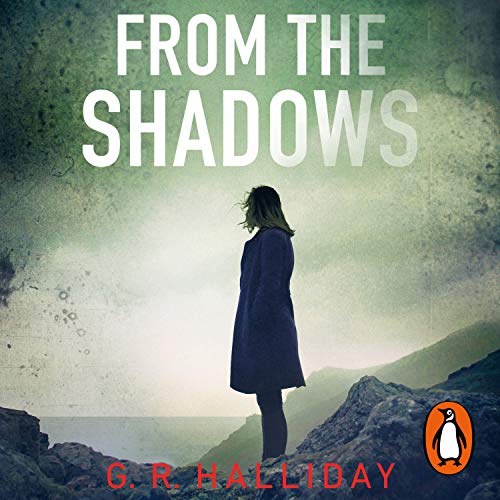 Random House presents the audiobook edition of From the Shadows by G.R. Halliday.

A stunning, atmospheric police procedural set against the grit of Inverness and the raw beauty of the Scottish Highlands, this is the first book in the DI Monica Kennedy series.

Sixteen-year-old Robert arrives home late. Without a word to his dad, he goes up to his bedroom. Robert is never seen alive again.

A body is soon found on the coast of the Scottish Highlands. Detective Inspector Monica Kennedy stands by the victim in this starkly beautiful and remote landscape. Instinct tells her the case won’t begin and end with this one death.

Meanwhile, Inverness-based social worker Michael Bach is worried about one of his clients whose last correspondence was a single ambiguous text message; Nichol Morgan has been missing for seven days.

As Monica is faced with catching a murderer who has been meticulously watching and waiting, Michael keeps searching for Nichol, desperate to find him before the killer claims another victim.

What listeners say about From the Shadows

Brilliant book from start to finish.. It was partly due to where I lived that made me buy this... You would be silly not to listen to this book... Its a must buy auditable, The narrators voice kept me listening to this book with suspense.

A good story but perhaps a little long in parts. Narration was good, clear,. A nice book.

I enjoyed this book. Narration was fine - didn't get in the way, unlike Angus King's mangling of perfectly good Scottish crime thrillers. Let's hope there are many more!

This is a grim tale of abduction and torture beautifully crafted in it's unrelenting bleakness.

It’s a well-written crime debut. The language is pleasantly terse but not too economical. Characters achieve enough depth to allow for intriguing future instalments. Halliday Refrains from spoonfeeding us information, which is a relief for more attentive listeners; I‘m often bored senseless by crime authors who repeat every clue several times over to pander to distracted audiobook listeners. The touch of cosmic horror is brilliant, I think, invoking a distant sense of the supernatural without actually going anywhere near it. I very much hope Halliday will continue in that vein. The only story problem is a common one for crime debuts: as the story nears its finale the red herrings pile up somewhat unnecessarily and implausibly-and never for long enough for us to actually get misdirected. The story would have been more elegant had Halliday not yielded to the temptation. Having said that, I do very much look forward to the second book.

I loved this book the opening just hooks you straight away the charaters where brilliant and came to life.

Mainly my problem was the narrator. It might be because I am Scottish too but I just found her voice incredibly irritating. Too posh to swear and dragging the last syllable of the word out just drove me nuts. I was bored listening to her.

Lost the will to live trying to listen to this. There may be a good story underneath but ..... Couldn’t find the button to return it😤.