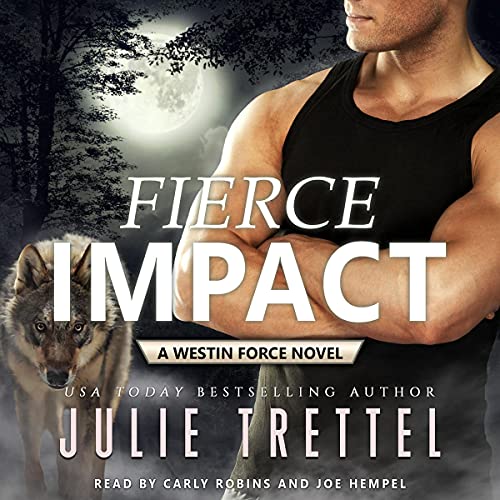 By: Julie Trettel
Narrated by: Carly Robins,Joe Hempel
Try for £0.00

Grant Phillips has always been a team player. He lives his life for the Force and worked hard to land a coveted spot with Team Bravo. He follows the rules, keeps his head down, and never causes trouble. Grant does everything for everyone else and wants for very little. The mission always comes first, until she waltzes into his life.

Taylor Maxwell is a wild card. A thrill-seeker. A rogue wolf. She lives her life only looking out for number one. There’s little she won’t do for the next paycheck. When she gets contracted to steal a priceless heirloom from the vault of a well-known drug lord, she readily accepts. This time, it’s personal, as she knows the prize contains ancient knowledge of shifters, and its current owner is about to exploit it.

Taylor has spent months cultivating the perfect cover for the assignment and embedding herself as close as possible. But the sudden appearance of Westin Force, a well-known shifter paramilitary group, could destroy all she’s worked for.

She has two options: work with them, or against them. Joining forces sounds easy, but there is nothing easy about the strong, silent wolf shifter with the smoldering gray eyes, whose overbearing presence throws her off her game.

Grant’s focus has always been on the team, but not this time. For him, the mission has changed, and his eyes are firmly focused on the one thing he never thought he wanted: his true mate.

What listeners say about Fierce Impact

great voices for Taylor and Grant, some audiobooks don't come across right with other voices but this one was great!

I thought it was a good story, had me giggling at times. a nice, sweet quick read/listen.

I liked the story a lot, it was of the better shifter stories I’ve heard. I don’t like how some shifter books have the couple so stuck in their own way that they have very little growth and neither of them have the chance to shine. Julie did not box her characters in like that. Grant and Taylor both had problems and issues they need to work through and overcome before they could actually bond, but I like how they didn’t push each others buttons. They both respected and listened to each other and grew together because of it. Taylor is strong, smart and knows her own mind. I loved getting to see her work and set boundaries.

I did like the back and forth narration if the two POVs, I just struggled with the stilted telling by the woman, there were strange pauses and if I didn’t like the story so much it might have impacted my ability to listen to the end.

I will definitely check out the rest of Julie’s books and keep reading the Weston force books.

I very much enjoyed reading the book with the companion narration. I only noted a couple of small errors, but they didn’t detract from the story. Quite fun. Definitely recommended.

Love this book did not put it down , this author is amazing, everyone should read this series 👀👀👀👀!!!!!!

this was outstanding book

This was a great start to the series, I can't wait for the next one

Awesome, this story I really enjoyed. Every chapter better then the next. Can’t wait for the me next book in sequence.