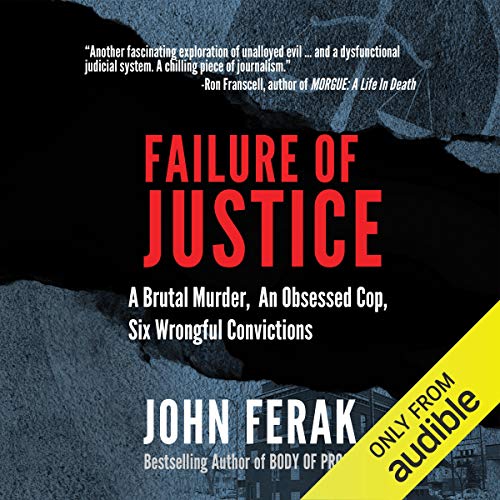 By: John Ferak
Narrated by: Kevin Pierce
Try for £0.00

Everyone felt the same way: Small-town Nebraska widow Helen Wilson didn't have an ounce of meanness in her body. Then, on February 5, 1985, one of the coldest nights on record, the unthinkable happened. The 68-year-old resident was murdered inside her second-floor apartment. But why?

Local residents were horrified. What type of monster would target a vulnerable widow to fulfill his homicidal sexual fantasies? The crime scene was eerily ritualistic. The trail of evidence turned frustratingly cold until an astonishing breakthrough occurred four years later. A torn scrap of money recovered at the crime scene became the presumed smoking gun that helped solve the hideous crime. The news of six arrests was absolutely stunning to the locals in this easygoing blue-collar community of 12,000 residents. But why were six loosely connected misfits who lived as far away as Alabama, Colorado, and North Carolina being linked to the rape and murder of a beloved Nebraska widow?

As they sat in jail, the constant threat of Nebraska's barbaric electric chair frightened these troubled souls, except for one of them. Joseph White remained defiant in his fight to prove his innocence. It didn't matter. All six of the condemned were convicted of murder and sent away to prison for the ghastly crime. The town moved on, convinced that justice had been served.

For more than 25 years, the Beatrice 6 rotted in prison. In 2008, DNA tests proved that there'd been a terrible failure of justice, but what would it mean to the prisoners?

"John Ferak has carved his necessary true-crime niche with another fascinating exploration of unalloyed evil in overlooked places, and a dysfunctional judicial system. A chilling piece of journalism." (Ron Franscell, author of The Darkest Night and Morgue: A Life in Death)

What listeners say about Failure of Justice

I didn't know anything about this crime or the convictions. The title indicates there was an injustice but that's about it. So I was disappointed the audio starts with a prologue which pretty much summarises the entire book. I strongly recommend you skip this.

The rest of the book covers in great detail, the community of the time, the horrific crime, search for a suspect, conviction and aftermath. There are a lot of characters and I found it tricky to keep track of who was who. Because it's told chronologically there's also the introduction of new characters throughout, sometimes just to make a point and then they disappear.

I realise there's a duty with non fiction to tell the story from many viewpoints and angles, but this just led to the feeling I was looking down at the scene and not involved. I therefore didn't feel any emotional attachment to the victim or the suspects, and didn't much care what happened (compounded by the prologue having already given away the ending).

So, is this book worth it? Yes I think so. The crime took place within my lifetime in the 1980s and I found it scary to hear how the investigation was handled. I remember when DNA testing was first used in a case in the UK and found it fascinating to hear how this new technology became incorporated into the judicial process of this case. It was also narrated well. This is the second book I've listened to by Kevin and I find he keeps a calm, steady pace with even tone, just right for such a serious non-fiction topic. Overall rating 3.5 stars.

Finally I must mention two things 1) I received a non-cost copy of this book in exchange for a review. 2) I can only read gifted books on the US site but I'm an avid reader and all my reviews (over 70 to date) can be found on the UK site.

Wow, such a difficult book to listen to because of the stories of those involved in the case. The writing and narration are outstanding but the story is truly heart breaking.
How can 6 people be wrongly convicted for a murder they did not commit? How can they be put to trial and imprisoned and spend years behind bars while innocent? How can they be released then have to fight for compensation for the time they were wrongfully imprisoned? If you were in their shoes would you "confess" or would you maintain your innocence?
This is a sign of a good book - made me think and question. Amazing listening!

What did you love best about Failure of Justice?

This was a thorough exploration into the murder, investigation, trial, conviction and eventual exoneration--the largest such ever in the United States--of the Beatrice 6. The murder of a much loved older lady in a small town in Nebraska. The story is much more than that. An overzealous investigator, election seeking officials who railroad six challenged people into confessing to a crime they didn't do. And finally the lawyers who fought to exonerate the innocent people with DNA and scientific evidence.

What was one of the most memorable moments of Failure of Justice?

What does Kevin Pierce bring to the story that you wouldn’t experience if you just read the book?

Kevin Pierce is one of my favorite narrators. He has the artful ability of all good storytellers. A folksy voice that keeps you hanging on the story to come.

It's always a pleasure to listen to Kevin Pierce. I'm a long time reader of the True Crime genre. John Ferak is a pro in this field. With a journalism background his work is always detail oriented. May I suggest the ebook of this work? There is a lot of factual detail that may be easier to follow reading along with this Audible title.

Thank you for making this available to listen to and review.

This audiobook was provided by the author, narrator, or publisher at no cost in exchange for an unbiased review courtesy of AudiobookBoom dot com.

If this review was helpful please leave a helpful click. Thanks for taking the time to read my reviews.

This was an insightful book. A famous justice was quoted as saying "It is better that 100 guilty men go free than one innocent man to be convicted" So true, and between Murphy's Law and the greed of politics six lives were STOLEN.

This book was gifted by audioboom in exchange for an unbiased review.

Definitely, especially if they were fans of "Making of Murderer" (show on Netflix) or "Predator" by Jack Olsen. This book is written in a similar vein but with an entirely different event. The book is well-written and well performed.

This is a non-fiction book so the characters are real people. This is a memorable story populated by colorful people. The police officer who is a die-hard fan of "Starsky and Hutch" and tries to interrogate suspects based on the show comes to mind. This officer also based most of his case on interviews with a local gossip which he failed to record in any way. You can't even make this stuff up.


Which character – as performed by Kevin Pierce – was your favorite?

Sadly, Lobo, the main suspect in this book is a memorable tragic figure. This murder investigation interrupted his life just as he had make some positive headway in his otherwise troubled life.

The entire book moves you from shock at the horrific crime to disbelief at the direction the investigation takes to horror at how the whole thing works out.

This is a great book. I received this book for free in exchange for an honest review.

This is a five-star miscarriage of justice book and, like many of this genre, it includes misconduct, negligence and incompetence within the law enforcement and criminal justice systems. But it is also an interesting case study of what might be called in lay terms, brain-washing – marginalised, down-on-their-luck, gullible people who were lied to, scared and brow-beaten into confessing and, in some cases, actually believing they had committed or witnessed the crime. There is also the heroism of one of the convicted six who never stopped fighting for justice, a man who has proven to be an inspiration to many people whose lives he still touches. The cast of characters ranges from the admirable to the despicable, all fascinating in their own way. The book is beautifully written and the narrator, Kevin Pierce, shines as always.

Truth is always more interesting than fiction. In this case, law enforcement uses the power of the state to destroy the lives of six people. Using fear and lies an ignorant self promoting deputy is aloud to run a scurrilous investigation unchecked by his superiors.

True crime is my favorite genre but I just couldn't get into this one. The writing and narration were both just fine, it was the story itself that didn't really interest me. It's a preference thing only, I think. Listeners who enjoy true crime will likely enjoy this book!

This audiobook was provided by the author, narrator, or publisher at no cost in exchange for an unbiased review courtesy of Audiobook Blast.

“This audiobook was given by the author, narrator, or publisher at no cost in exchange for an unbiased review via Audiobook Boom.”

A true crime drama that takes you into the story of how people can be wrongfully convicted of crimes they didn't commit. Great in depth story.

This book made me mad, not the book, but the fact that is a true story. I will listen to any book read by Kevin Pierce.