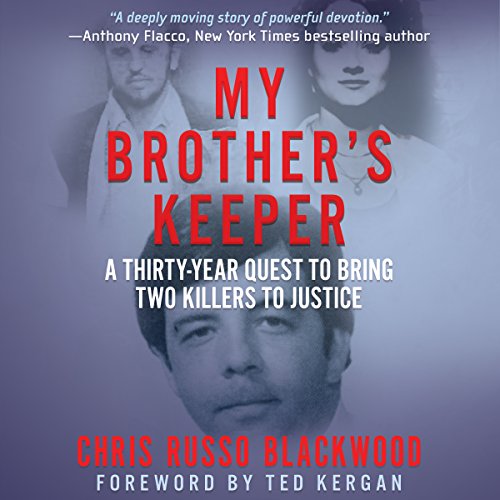 By: Chris Russo Blackwood
Narrated by: Tonia Blake
Try for £0.00

The moment he found out his brother was missing and presumed dead, Ted Kergan launched a relentless effort to bring two suspected killers - a teenage prostitute and her much older grifter boyfriend - to justice and find Gary Kergan's body. Little did he know his quest would consume a fortune and take 30 years to reach its dramatic conclusion.

Thwarted at first by the fact that his brother's body could not be located and a new district attorney reluctant to prosecute as a result, Kergen had to keep track of the killers, from New Orleans' notorious French Quarter to Las Vegas and points in between, and wait for a break in the case that seemed like it would never come.

Then nearly 30 years later, science, detective work, and especially a brother's love and tenacity would combine for a resolution that would end in a dramatic trial in which one of the killers' diary would be a star witness.

What listeners say about My Brother's Keeper

it was a bit boring sorry to say
I received a copy of this audio book in exchange for an honest review.
All thoughts, opinions and ratings are my own.

Intriguingly complicated story that covers many years. I found myself pulled into the lives of the character. The text is beautifully narrated by Tonia Blake’s easy-to-listen-to voice. Highly recommend!

Stories of families committed to learn all they can about the deaths of loved ones fills me with dread they won’t.

This story ends the other way.

The brotherly love and frustration is clear.

The narration was done quite well.

Lots of detail, liked the narration. It covered a huge amount of time but could've been condensed a bit. Some parts drug on but overall pretty good.

Would you try another book from Chris Russo Blackwood and/or Tonia Blake?

IT WAS TO DETAILED ON UNIMPORTANT DETAILS AND IT WAS EXTREMELY HARD TO FINISH. NO TWIST, NO SURPRISES. JUST BORING,BORING,BORING

NOT SURE. MAYBE SOMETHING BY A J FINN AS THE FIRST BOOK I READ WAS VERY GOOD. THE WOMAN IN THE WINDOW