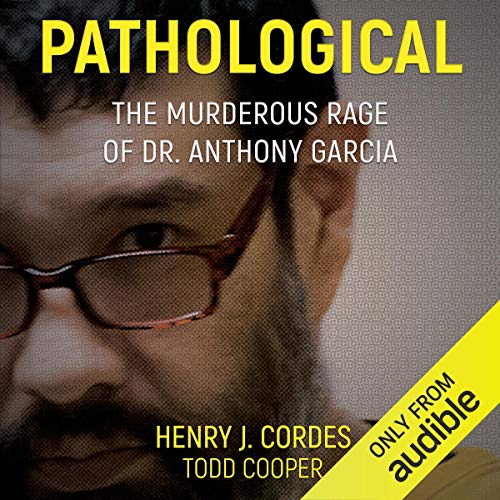 By: Henry Cordes,Todd Cooper
Narrated by: Kevin Pierce
Try for £0.00

A brutal serial killer was stalking Omaha. But who could kill with such precision?

Detective Derek Mois wasn’t sure what he was dealing with when in March 2008 he walked into a home in an affluent Omaha neighborhood and was confronted with the bodies of an 11-year-old boy and the housekeeper. Both had been murdered with kitchen knives plunged into their throats. Who would do something so vile, and why? Lacking answers, Mois and other detectives working the case were stumped.

Five years later, a strikingly similar crime occurred in which two more victims were brutally murdered with knives expertly thrust into their jugular veins. The modus operandi of the murders pointed Mois and a special task force in the direction of looking for a serial killer. But no one could have anticipated that path would lead to the Department of Pathology at Creighton University.

In Pathological: The Murderous Rage of Dr. Anthony Garcia, authors Henry J. Cordes and Todd Cooper, who covered the story for the Omaha World-Herald, recount the dramatic tale of deep-seated revenge, determined detectives, and the sensational trial of the doctor-turned-serial killer.

What listeners say about Pathological: The Murderous Rage of Dr. Anthony Garcia

Extremely well written, with excellent flow and narration. I hung on every word. Felt a range of emotions, from frustration to relief, with how the case was handled by the police. Wish it had been a longer listen. Highly recommend

Is it just Pierce?

No. Although I'm convinced Mr Pierce could read the phone book and have this listener enthralled, as a previous commenter mentioned this book has you hanging onto every word.

I cannot count the times I hit "back" to catch a sentence while partially distracted at work. This is a sad listen but extremely well written with the likes of the Olsen books (maybe it's the Pierce factor).

worth every penny and a credit, this true crime buff highly recommends you listen!!!

Narratied by Kevin Pierce, of course it's good!

Well written and a quick listen. I would be interested in hearing Garcia's story in more detail.

This book was a great read!!!

What an asshole killer! The story was well written and well read! It really makes you think about how some people tick!

First of all when I'm looking for true crime I always check to see if Kevin Pierce is narrating. He is amazing.

I've never heard of the subject of this book. It's a newer case but I wasn't aware of it.

Sad, sad, sad account of a deeply troubled man and how he changed the lives of many people after his

One reviewer felt they didn't give much info into the life of Dr.Garcia but I feel that it did.

Excellent in every way. It was shorter than my usual listens but it covered everything.

Kevin Pierce does it again!!

Without Kevin Pierce narration, I'm certain I would have never finished this book. It was somewhat interesting, but I found myself distracted & floating off from time to time. I would back it up a couple minutes to listen to it again. Kevin Pierce is an excellent narrator, but this story didn't have all the detail I was looking for. It's a good book, but has the potential to be so much better.

There are things in this book everyone should know

In my life I have had 12 major surgeries And in the last three years three brain surgeries, three strokes and I know what it is like to be totally helpless and in the hands of hospital staff, doctors, nurses. And I know there is a tendency to let hospitals or nurses who have questionable things in their background that get passed from hospital to hospital. Reading this book will prompt you to check into the backgrounds of your doctors or surgeons and that's a good thing. Gathering knowledge on what goes on behind the scenes with doctors and hospitals could save your life or the life of your loved ones. Being blind to it could be fatal.

Well-written and narrated but the story just wasn't that interesting. This came off as your generic true crime book.

What a sick dude. This was such an interesting tale of twisted revenge and elevated ego. There is so much to unpack here, but the overall story was written well and it certainly kept me interested.

Not A Lot Of Suspense Here...

I mean, the title is the give away so during the first half of the book, you know all the leads are false ones. Most of the book is about forensics and the detectives, and this does make the book somewhat interesting, but this does not compare with the work of Jack Olsen or other more reputable true crime writers.