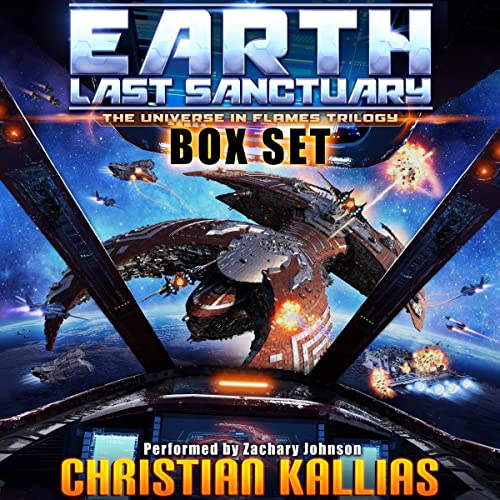 By: Christian Kallias
Narrated by: Zachary Johnson
Try for £0.00

They have returned. Now the galaxy will burn.

An ancient foe lurks in the shadows...licking its wounds and assembling its forces.

Risen from the ashes and shrouded in darkness, these ancient beings are waiting for the perfect opportunity to strike back and set the universe on fire.

After their world is ambushed in a devastating onslaught, the Star Alliance is nearly wiped out in one fell swoop. Hotheaded pilot Chase Athanatos leads the barely surviving fleet to the far edge of space and a small backwater planet.

In doing so, the Alliance unwittingly puts Earth in the crosshairs of an intergalactic, eons-old conflict between ancient foes and god-like creatures known as the Olympians.

Chase’s people must join forces with the citizens of modern-day Earth if they hope to survive the resurgence of an enemy once thought extinct.

When it becomes clear that his Fury powers are awakening, Chase must face his inner demons and learn to control them, or he could very well destroy the universe he has sworn to protect.

If he doesn’t succeed, then the galaxy will fall into darkness.

4. Way of the Warrior

5. Fury to the Stars

Audio flicks between sound levels and what I assume to be different microphones very distracting. Good story though

After Book One: I received a free audible code but I would have gladly forked over a credit for this enjoyable series.

Lots of stuff going on

So, the author took a bunch of elements from different movies and mashed them together. At first, I thought this might be rough to listen to, but he did a great job. It's got a little top gun, a little star trek, a little star wars, and some clash of thr titans. I loved the narrator as well. He does a voice that sounds EXACTLY like Captain Picard (Patrick Stewart). Finished the first 3 books, can't wait for the rest!