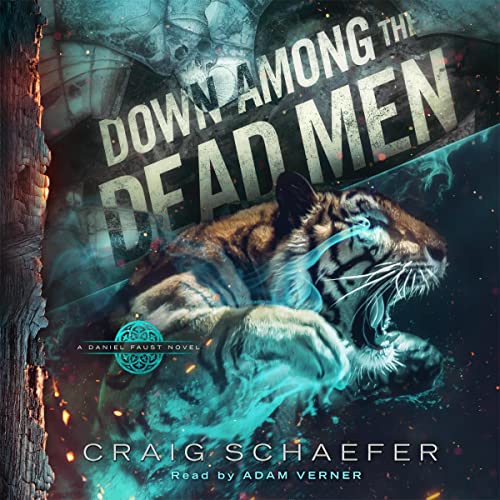 Down Among the Dead Men

By: Craig Schaefer
Narrated by: Adam Verner
Try for £0.00

Daniel Faust’s last heist ended with a betrayal, a bullet in his heart, and a plunge from a lonely back-country bridge. Now he’s on life support, and the occult relic keeping him tethered to this world is counting down the last seconds to midnight.

That’s the good news. The bad news is, he just woke up in hell.

Marooned, lost, and hunted in an endless city of the damned, Daniel is racing against time. If he can’t make it back to his body before the clock runs out, he’ll be trapped in the netherworld forever. A host of enemies stand in his way. Some are desperate to silence him. Others, ghosts etched in blood and gun-smoke, are hungry for payback. Hell is the one place where you can never outrun your past.

And in the land of the living, Daniel’s family and crew gather to mount a desperate defense around his hospital bed as assassins close in from all sides. Survival will take a miracle, but this magician might have one last trick up his sleeve.

What listeners say about Down Among the Dead Men

So glad this is back

I have missed the Daniel Faust series so much, it’s genuinely one of the best Urban fantasy series I’ve read in years. The characters are pleasingly morally grey without being cringey and the villains competent without being moustache twirling one shot wonders

This is a very interesting book where there’s the standard DF race against time and being in enemy territory. Highly recommend this author.

Well worth the wait

It's crazy to think we're already at book 10 for this series and wow what a good next chapter. Gotta say I think this one might now be my favorite of the series and Adam does yet another amazing job at bring this charater to life. 10/5 is all can say. Now back to waiting for the next installment.

Ok, so Adam Verner’s Scottish accent hasn’t improved at all in ten plus books but for a pulpy urban fantasy series, the Faust novels are hard to beat and this addition, like those before it, kept me excited and made me want more.

This book was great!!! The performance as always was right on. I can’t imagine anyone but Adam Verner reading these stories. Keep it up Craig Schaefer your an amazing writer!!!