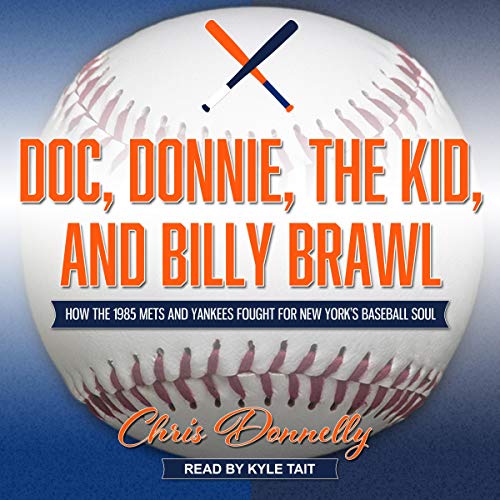 By: Chris Donnelly
Narrated by: Kyle Tait
Try for £0.00

Never before had both the Yankees and the Mets been in contention for the playoffs so late in the same season. For months New York fans dreamed of the first Subway Series in nearly 30 years, and the Mets and the Yankees vied for their hearts.

Despite their nearly identical records, the two teams were drastically different in performance and clubhouse atmosphere. The Mets were a team filled with hard-nosed players who won over New York with their dirty uniforms, curtain calls, after-hours activities, and because, well, they weren't the Yankees.

Meanwhile the Yankees featured some of the game's greatest talent. But the Yankees' abundance of talent was easily overshadowed by their dominating owner, George Steinbrenner, whose daily intrusiveness made the 1985 Yankees appear more like a soap opera than a baseball team.

What listeners say about Doc, Donnie, the Kid, and Billy Brawl

A great book regarding great Yankees and Mets teams. Highly recommended for all New York fans