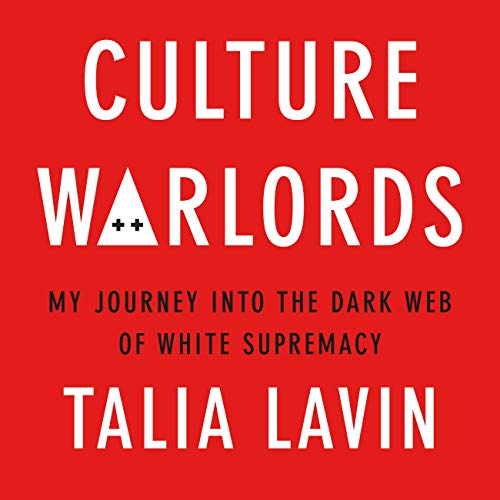 Talia Lavin is every fascist's worst nightmare: a loud and unapologetic young Jewish woman, with the online investigative know-how to expose the tactics and ideologies of online hatemongers. Outspoken and uncompromising, Lavin's debut uncovers the hidden corners of the web where extremists hang out, from white nationalists and incels to national socialists and Proud Boys.

In stories crammed with catfishing and gatecrashing, combined with extensive, gut-wrenching research, Lavin goes undercover as a blonde Nazi babe and a forlorn incel to infiltrate extremist communities online, including a whites-only dating site. She also discovers the network of disturbingly young extremists, including a white-supremacist YouTube channel run by a 14-year-old girl with nearly one million followers. Ultimately, she turns the lens of anti-Semitism, racism and white power back on itself in an attempt to dismantle and quash the online hate movement's schisms, recruiting tactics and the threat it represents to politics and beyond.

Shocking, provocative and humorous in equal measure, and with a take-no-prisoners attitude, Culture Warlords explores some of the vilest subcultures on the internet and how they're doing their best to infiltrate the mainstream. And then she shows us how we can fight back.

"Lavin writes like her hands are on fire, forcing us to take a hard look at our ugliest truths." (Pamela Collof, The New York Times Magazine and ProPublica)

"Culture Warlords is a necessary and urgent read that could not have come at a much better time. Thoroughly researched and engaging, this debut demonstrates the work of a fearless reporter." (Morgan Jerkins, New York Times best-selling author of This Will Be My Undoing)

What listeners say about Culture Warlords

I loved this book. Well read by Talia, with honest, fact-based reporting, and personal experience.
Recommended.

This is an important work detailing the re-emergence of the far-right in the West, government inaction in the face of it and various NGOs moves taken to counter it.

Talia Lavin is doing great work and there was a lot of fascinating ground covered here, though there was a fair bit of repetition of names and groups throughout (I got the impression it was to reinforce certain names but it could come across as underestimating the listener's ability to concentrate). The production of the audiobook itself was poor in places, with the mixing seemingly off and levels changing mid sentence on more than occasion, going from softly spoken to forceful in ways that didn't make much sense in terms of emphasis, it just seemed poorly mixed. Almost more importantly though, the content was great and Talia Lavin is a valuable asset in the battle to understand the far right and what makes them tick.

History is our best teacher and Culture Warlords took me on a journey to explore the past in order to help understand the present.

Full of passion and genuine feeling, this book provides a window into the darker side of society and the minds of its’ inhabitants.

The words are impactful yet poetic and Lavin’s reading is pacy and engaging. I loved it and will return to chapters again and again to aid with my own learning and reasoning.

Thoroughly researched, cleverly presented, brave and soul bearing, I was hooked from the first. I've been vegetarian for years, suddenly I'm craving a shredded beef sandwich which is upsetting for multiple reasons 😁 Bravo Talia! A truly wonderful, brilliant book 💕

Satisfying, will written and earnestly performed

An excellent and timely book about the pathetic morasse of right wing extremism. From mass shooters to pagan larpers, this book gives an intimate insight into the kinds of people who fall into the ideologies of hate, without forgetting their essential humanity nor condoning them.

The book moves at a brisk pace and is stylishly written. The performance is heartfelt and eloquent. Worth a listen for anyone interested in people's decent into the white supremacist death cult, and the ways it's being combatted.