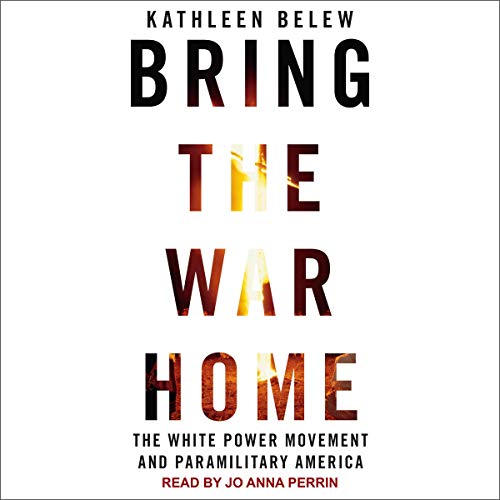 By: Kathleen Belew
Narrated by: Jo Anna Perrin
Try for £0.00

The white power movement in America wants a revolution. It has declared all-out war against the federal government and its agents, and has carried out - with military precision - an escalating campaign of terror against the American public. Its soldiers are not lone wolves but are highly organized cadres motivated by a coherent and deeply troubling worldview of white supremacy, anticommunism, and apocalypse.

In Bring the War Home, Kathleen Belew gives us the first full history of the movement that consolidated in the 1970s and 1980s around a potent sense of betrayal in the Vietnam War and made tragic headlines in the 1995 bombing of the Oklahoma City federal building.

Returning to an America ripped apart by a war that, in their view, they were not allowed to win, a small but driven group of veterans, active-duty personnel, and civilian supporters concluded that waging war on their own country was justified. They unified people from a variety of militant groups, including Klansmen, neo-Nazis, skinheads, radical tax protestors, and white separatists.The white power movement operated with discipline and clarity, undertaking assassinations, mercenary soldiering, armed robbery, counterfeiting, and weapons trafficking. Its command structure gave women a prominent place in brokering intergroup alliances and giving birth to future recruits.

Belew's disturbing history reveals how war cannot be contained in time and space. In its wake, grievances intensify and violence becomes a logical course of action for some. Bring the War Home argues for awareness of the heightened potential for paramilitarism in a present defined by ongoing war.

What listeners say about Bring the War Home

This is a fascinating and important book - everyone should read it to understand what's happening in US politics today. However you should READ it, not listen to it. The narration is so monotonous that I almost didn't continue after the first chapter.
READ this book! Don't listen to it!

Relevant to understand that this isn't new

Incredible well researched, this is in the top tier of books on this topic.

Good but too boring.

Interesting but at the same time very long and boring. The reader read the whole book in same tone. Very hard to stay focused.

This is a book that if I could do it over again, would probably read, rather than listen to, because there are a lot of dates, names, abbreviations, and locations involved. I think in order to get the most of this book, you should read with your eyes, and maybe even a map, for reference.

Other than that minor point, I am very glad to have read this book, despite it being a profoundly unpleasant experience. The author carefully dissects the white power movement, its relationship to the wars we fight, and how it benefits from our misunderstanding and underestimation of it. This book is an important challenge to anyone who understands American politics in terms of intellectual abstractions and debate, and ignores the role of bloody violence in shaping our history.

The book is fascinating. Get it in print. The reader doesn’t seem like she’s a real human being.

Could not be more relevant right now in America during fuhrer Trump's white power driven administration.

As a person interested in both American history and political science, I thought this book might be an interesting look at a fringe of the American political diaspora. What I got instead was a lengthy, anti-Republican, anti-Conservative rant that attempted to tie the American Military, Soldier of Fortune Magazine, Ronald Reagan, and American Conservatism to a tiny fringe of the Radical Right. The author's wildly leftist views come spilling out from every crack and seam of this book and got so bad that I only finished the book due to my policy of finishing everything I start. If you're looking for a historical look at this movement, don't waste your time with this drivel.

Belew is a remarkably thorough and brave scholar, and she needs to be to meet the scholarly challenge of assembling a credible narrative history of a furtive and violent movement like this. Given that much of the movement’s developments involved clandestine and often criminal behavior, it takes great care to assemble and sort through the archive to develop the contours of the real story. That scholarship also involves personal bravery, since the white power movement valorizes acts of  pseudo »lone-wolf » terrorist violence. Finally, the history itself is grippingly narrated and the analysis is intellectually insightful.

The book is idiotic. It's nothing but constant connflation, misleading terminology, guilt by association, cherry picking, ignoring of relevant data, broad brush nonsense and an obvious attempt to fear monger and push an idiotic narrative with no proof but the authors word for it. The author should be embarrassed.

The history presented in this book is incredible and I really wanted to stay engaged and follow the details. However, the narration was such a distraction that it was almost impossible to concentrate and follow along. It sounded like a robot reading at times, and always someone who was not actually engaged with the story.

Wish it were a different narrator

Narration is annoyingly difficult to focus on. The tone and cadence.... keeps losing me and I keep shutting it off

Scary documentation of whites US arms, trains and pays to be
death squads, genocide targeting Black Women here and globally.

I had to buy the book which I highly-recommend. this is the first audio book out of 135 I've purchased I can't listen to due to the speed-reading, emotionless narration. Impossible to focus on the material presented.