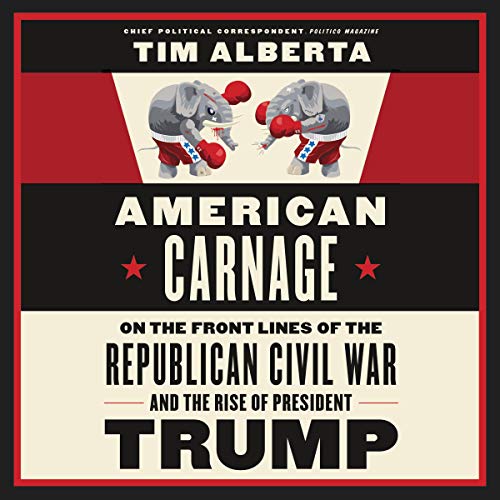 Politico Magazine’s chief political correspondent provides a rollicking insider’s look at the making of the modern Republican Party - how a decade of cultural upheaval, populist outrage, and ideological warfare made the GOP vulnerable to a hostile takeover from the unlikeliest of insurgents: Donald J. Trump.

The 2016 election was a watershed for the United States. But, as Tim Alberta explains in American Carnage, to understand Trump’s victory is to view him not as the creator of this era of polarization and bruising partisanship, but rather as its most manifest consequence.

American Carnage is the story of a president’s rise based on a country’s evolution and a party’s collapse. As George W. Bush left office with record-low approval ratings and Barack Obama led a Democratic takeover of Washington, Republicans faced a moment of reckoning: They had no vision, no generation of new leaders, and no energy in the party’s base. Yet Obama’s forceful pursuit of his progressive agenda, coupled with the nation’s rapidly changing cultural and demographic landscape, lit a fire under the right, returning Republicans to power and inviting a bloody struggle for the party’s identity in the post-Bush era. The factions that emerged - one led by absolutists like Jim Jordan and Ted Cruz, the other led by pragmatists like John Boehner and Mitch McConnell - engaged in a series of devastating internecine clashes and attempted coups for control. With the GOP’s internal fissures rendering it legislatively impotent, and that impotence fueling a growing resentment toward the political class and its institutions, the stage was set for an outsider to crash the party. When Trump descended a gilded escalator to announce his run in the summer of 2015, the candidate had met the moment.

Only by viewing Trump as the culmination of a decade-long civil war inside the Republican Party - and of the parallel sense of cultural, socioeconomic, and technological disruption during that period - can we appreciate how he won the White House and consider the fundamental questions at the center of America’s current turmoil. How did a party obsessed with the national debt vote for trillion-dollar deficits and record-setting spending increases? How did the party of compassionate conservatism become the party of Muslim bans and walls? How did the party of family values elect a thrice-divorced philanderer? And, most important, how long can such a party survive?

Loaded with exclusive reporting and based off hundreds of interviews - including with key players such as President Trump, Paul Ryan, Ted Cruz, John Boehner, Mitch McConnell, Jim DeMint, and Reince Priebus, and many others - American Carnage takes us behind the scenes of this tumultuous period as we’ve never seen it before and establishes Tim Alberta as the premier chronicler of this political era.

What listeners say about American Carnage

I think everything about this book is fantastic, just fantastic. All the persons featured come alive in a spectacular way.

Everyone gripped by the recent election must read this book., especially as Trump lost and there are so many forks in the road to ponder.

While this title certainly is detailed, with considerable effort and access going into its creation, ultimately it was disappointing as it does not provide impartial analysis of its subject matter.

At several points where a cold eyed assessment would have best served, we are instead subjected to a treatise on the author’s own world view - a world view which seems dated at times and partially misguided at others.

This book isn’t an independent review of the Republican Party through the prism of events and its main actors since the turn of the century. Rather it seems like a review seen through the eyes of a writer who wishes to put ‘traditional conservatism’ on a pedestal and who holds an indoctrinated view of American exceptionalism which seems several decades out of date.

The author goes out of his way to paint an over the top defence of his own political favourites while not casting a sufficiently critical eye on their flaws or accountability for subsequent problems.

Basically if you want a rewritten history of the Republican Party which heroes the likes of Boehner, Ryan and Romney is what you’re after then you’ll like this book. If you want something more balanced then this needs to be read/ heard through that perspective.

If you're a fair minded individual not stuck in a far left or far right echo chamber this is a must. The endless fume and outrage over world politics is absolutely exhausting, it doesn't just exist in the right wing tabloids, even reading below the line comments in broadsheets like the FT and The Guardian is full of intellectual "I'm more intelligent than you" dick swinging from keyboard warriors too afraid to get into the arena and be the change that they want to see, or take time to understand those who they don't 100% agree with.

The author takes an absolutely fair minded and unbiased viewpoint of the last ten years outlining the increased radicalisation of American politics and society (focussing specifically on the Republican Party) which led to the shameful Trump regime. 26 hours' listening but such an important book.

Shock horror for those who only ever read The Guardian too, there have been some genuinely decent and fair minded Republicans who have served the GOP since Obama was President, they are not all swivel eyed loony racists. And not every action or policy that the Democrats took was correct, they are human too.

Well done Tim, a book that will be as important many years in the future as it is now to understand the sad silos in modern society and how people with different views cannot respect each other anymore.

This is essential reading for any enthusiast of Repubkican Party history. Very well researched. TD

this book isn't about the president. And the author doesn't waste time attacking him. Or anyone else. It is nuanced, meticulously sourced timeline of how the gop was captured. He interviews everyone, Paul Ryan, bohner, the president, everyone. An amazing book and enthralling. I couldn't put it down. I lost a whole weekend binging a book, you guys. A book. that's how good it is.

We've met the enemy, and it is us

This isn't a 'mea culpa' or a bashing of the Republican party at all. It's the story of Americans, in particular, a subset of those who tended to vote for the GOP over the years. This book is about how the Republican party pols, like Paul Ryan, John Boehner and even the late John McCain found themselves alarmingly out of step with the voters once so loyal to them.

It's also about the Republican pols like Michelle Bachman and Tim Huelskamp, who were very much in step with the evolving GOP voter base, They and other like-minded 'fiscal conservatives' (think Freedom caucus) listened closely to their constituents, indulged their requests and requirements, and midwifed them forth to their natural, logical result -- the election of Donald Trump.

It's about the Democrats and Burkian Republicans who, puzzled but mostly clueless, kept on doing what they always did, over and over again one day they were the bad guys, the 'elites' engineering the multicultural globalist take-over, who turned their backs on true Americans.

Donald Trump was the only real choice for what's become of the GOP. He is bringing them out of the desert and restoring them to their rightful stations as we speak.

This book is definitely above average in its exploding cohort of political non-fiction. I doubt a Rand Paul or Trump devotee will agree, but if you are a casualty of the current administration, and you need a more in-depth explanation than "GOP + Trump = evil bad!!", this book will take you there. I read a lot (ie, too much) political non fiction, but this one is what I was looking for. And no, I was not given a free copy to promo, I honestly mean it.

I liked this book a lot. Author did not seem bias. Things in this book were told that I never heard. Gives you another way to see the people that you may have never known. Only problem I had was a funny whoosh noise through out the book. May be just me. So glad I got this book. You get to see how the back stabbers work and who they are.

Should have picked George Will’s book

Political junkies will find this plodding. Does not have the elegance or insight of “beautiful country, burn again”. we do get to hear some insider stuff from Paul Ryan. otherwise, this is a well written news aggregate.

Way too long and reveals nothing; unless you’ve been living under a rock since a
2001.

Well researched, non-biased and well written. This book gives an insight into the goings on of Politicians behind the scenes.

Doesn't offer that much if you follow the news

This book is essentially a recap of the last 20 years of the GOP trajectory. It attempts to give insight on certain inflection points and political pivots, then it tries to graph how we traversed from a Bush-centric Republican doctrine to that of alt-right, Trumpism. I think the author succeeds for the most part but the book still feels like a fast-forward montage of things I already knew.

It does however provide some interesting details about what went on behind the scenes and a lot of personal dialog between Trump and his inner circle. It also provides a few insights into the thought processes of the Romneys, the Marco Rubios, and the Lindsay Grahams of the story and why they did or didn't do all of the things they either did or didn't do. I think this provides the bulk of whatever value one might take from this book.

My main criticism would be that the author's conservative bias shows at several points when he seems to be rationalizing on behalf of Republicans for abandoning their previously stated values in order to survive politically in the era of Trump. YMMV.

Reader was excellent if a little slow in pace for some. I listened at 1.1x and it was very good.

Contemporary History at its Finest

Tim Alberta’s engagingly thorough examination of the Republican Party over the past 12 years provides the most comprehensive explanation to date of how we have arrived at our current political moment.

the true story of the new Republican party

very informative and on the mark. I fear for the country but we have weathered worse