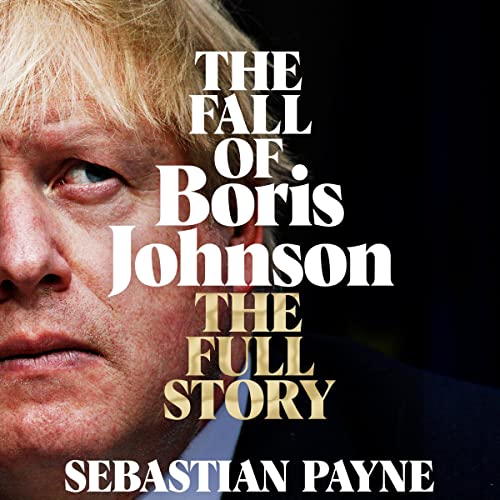 The Fall of Boris Johnson

The Fall of Boris Johnson is the explosive inside account of how a prime minister lost his hold on power.

Boris Johnson was touted as the saviour of the country and the Conservative Party, obtaining a huge commons majority and finally getting Brexit done. But within three short years, he was deposed in disgrace, leaving the country in crisis.

Sebastian Payne, Whitehall Editor for the Financial Times, tells the essential behind-the-scenes story, charting the series of scandals that felled Johnson: from the blocked suspension of Owen Paterson to partygate, and, then the final death blow: the Chris Pincher allegations. This is the full narrative of the betrayals, rivalries and resignations that resulted in the dramatic Conservative coup and set in motion events that saw the party sink to catastrophic new lows.

With unparalleled access to those who were in the room when key decisions were made, Payne tells of the miscalculations and mistakes that led to Boris’s downfall. This is a gripping and timely look at how power is gained, wielded and lost in Britain today.

What listeners say about The Fall of Boris Johnson

This is a characterisation of Boris as a bewildered and impotent fool, trying his best despite the travails of terrible advisors and Tory scandal - none of which had anything to do with the culture he fostered or people he surrounds himself with, chosen for their slavish loyalty rather than their competence. Oozing with self-pity, poor Boris is beset, time and time again, by crises that he in no way bears any responsibility for. His chronic dishonesty, disregard for the rules and over-weening ambition are barely mentioned or glossed over as traits shared by all politicians and Tory attack lines are regurgitated as statements of established fact.

I'm usually loathe to read this sort of instant history but thought this would be an entertaining but balanced overview of a turbulent and momentous period in British politics. I was wrong and it is neither, its entertainment value degraded by its stenographic character, repeating verbatim a very Tory view of Johnson's premiership. Avoid and wait for a more considered perspective.

Fascinating story, well told. But the author should not have been the reader. An actor is required

Sebastian’s podcast is always an interesting ,insightful and sometimes funny look behind the scenes of Westminster,this was more of the same.
Really enjoyed learning the truth behind the headlines. Great book and find Sebastian’s voice familiar and reassuring while hearing about the depressing mess our ex PM got himself and others into.

Superb at filling in the gaps

I'm a longtime Guardian reader, so to say I'm familiar with the backstory to this book is an understatement. What it does superbly, is to fill in the gaps and add context to decisions made and thoughts of those inside the No 10 operation at the time. I don't need to know names, and I don't think it's any detriment that the author extensively uses "a source" or "a senior No 10 insider" instead.

Decent book about a complete clown

I have looked on Boris Johnston as a complete self centred fool / I was right, please stop this man from ever returning as PM

Keeps very much within the Overton window of mainstream media public discourse. Earlier chapters are sometimes tedious with detail and often fail to challenge mainstream BBC narratives such as Boris claiming the rushed vaccine rollout was a glorious success. At the very least Astra Zeneca was withdrawn by just about every western country by June 2021 and by the UK in September of the same year and known as the clot shot. There are serious questions about the mRNA vaccines now too. The story develops in the Hasta La Vista chapter but I would have liked to see much more critique and less predictable portrayal. The narration by the author was below average and train spotter like.

A forgiving portrayal of a spoilt narcissist

The author comments on “getting the big calls right” as if he’s been reading the telegraph. Johnson may have got some things right but there’s no evidence to support the authors claims.

Runs through the events with some commentary, analysis comes toward the end but never get the sense of the writer’s views. Well balanced in that respect!

Great story (even though much of it may not be new) but badly in need of a professionak narrator. Would still recommend.