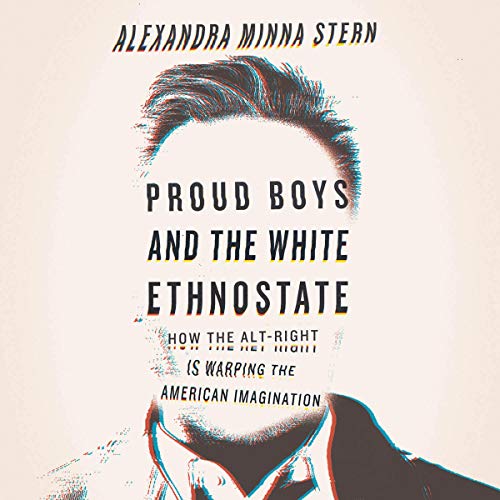 Proud Boys and the White Ethnostate

By: Alexandra Minna Stern
Narrated by: Frankie Corzo
Try for £0.00

What is the alt-right? What do they believe, and how did they take center stage in the American social and political consciousness?

Historian Alexandra Minna Stern excavates the alt-right memes that have erupted online and digs to the root of the far right’s motivations: their deep-seated fear of an oncoming “white genocide” that can only be remedied through aggressive action to reclaim white power. The alt-right has expanded significantly throughout America’s cultural, political, and digital landscapes: racist, sexist, and homophobic beliefs that were previously unspeakable have become commonplace, normalized, and accepted - endangering American democracy and society as a whole. When asked to address the Proud Boys and growing far-right violence, President Trump directed the group to “stand back and stand by”; and just two weeks before President Joe Biden’s inauguration, a white supremacist mob breached the US Capitol - earning praise from the Proud Boys leader among threats of future violence. In order to dismantle the destructive movement that has invaded our public consciousness and threatens American democracy, we must first understand the core beliefs that drive the alt-right.

Through careful analysis, Stern brings awareness to the underlying concepts that guide the alt-right and its overlapping forms of racism, xenophobia, and transphobia. She explains the key ideas of “red-pilling”, strategic trolling, gender essentialism, and the alt-right’s ultimate fantasy: a future where minorities have been “cleansed” from the body politic and a white ethnostate is established in the United States. By unearthing the hidden mechanisms that power white nationalism, Stern reveals just how pervasive the far right truly is.

“An important study that extends the knowledge from other recent books that have demonstrated a stubbornly pervasive network of white nationalists.” (Kirkus Reviews)

“Proud Boys and the White Ethnostate is the definitive guide to alt-right ideas today. Stern brilliantly documents how a younger generation of activists are repackaging the Far Right, waging a battle for cultural dominance. The internet is their home, where they mix fascist ideologies and faux scholarship to make their case for white/Christian/male dominance. Stern has analyzed an enormous swath of ethno-nationalist material, sparing the rest of us from having to engage in that odious task. Proud Boys is essential reading in the age of Trump.” (Arlene Stein, author of Unbound: Transgender Men and the Remaking of Identity)

“In this carefully researched book, the historian Alexandra Minna Stern studies a wide array of online web sites, documenting a rise in claims to whiteness as a basis of identity, as a claim to victimhood and as an argument for a ‘white ethnostate’. Drawing ideas from films (‘red-pilling’ comes from The Matrix) and from the left (the need for ‘safe spaces’), the Alt-Right, she argues, is trying to normalize a frightening shift from talk of civic nationalism to talk of race-based nationalism. This is very important work we should all know about.” (Arlie Hochschild, author of Strangers in Their Own Land: Anger and Mourning on the American Right, finalist for the National Book Award)

What listeners say about Proud Boys and the White Ethnostate

Can't actually explain why they're wrong

She just points and splutters. The narrator has a beautiful voice, and I'll be looking for more of her work. But this was very weak, almost provocatively so.

A look at and Analysis of the alt right.

the book looks at what we know as the alt right, through the examination of online cultures and meeting places. places like Reddit, 4chan, 8 Chan, gab, Facebook, and the others are examined. literary works and references of the ideology of the alt right is also examined. this book helped put vocabulary to things that I knew about but didn't know how to express.

this book can make you mad @ some points. take breaks.

If you love America, you're bad.
If you get together with fellow Patriots in order to fight back and help protect your neighborhood against widespread looting and rioting in you communities, oftentimes because the local police force has been muzzled and neutered from up the chain of command, this means you're a potential domestic terrorist and closeted white Supremecist regardless of your actual racial identity!

Nevermind the fact that one of the core tenants of the Proud Boys is literally anti racism. Or that the president of the entire club is an Afro-Cuban guy. Or the myriad of racially diverse members from around the world, as well as numerous members that a gay/bi.

Don't let these pesky, easily provable facts about a men's drinking club get in the way of a good boogeyman narrative! Don't even consider going out and trying to engage in a respectful discourse or earnestly asking actual members about the organization from a place of sincerity.
Instead, just read this book. It'll take the talking points and rhetoric from the propagandic news cycle, and bring them together in ways only a thousand monkeys on typewriters could! Don't risk the cognitive dissonance one might encounter when confronted with irrefutable facts that suggest you may have been misinformed on a group or topic.
If you like reading things you've heard a million times over in the news cycle, but hate the idea of there being more than 1 side of a story, then this book is for you!
The fear porn telling you to hate your neighbor before ever actually talking with and getting to know them, will definitely trigger that reptilian part of the brain that keeps you awake at night (some anxiety and paranoia to be expected). And the whole "Nazis living next door" notion is a bit played out since the 40s. But they manage to spice it up and make it relatable to leftists everywhere by broadening the definition to include pretty much everyone you don't like politically! You'll never have to articulate your beliefs in an objectively verifiable manner again!
But at the same time, have your drool bibs and calostome bags on standby with your caretaker/parents on alert when you are listening. Cuz the phenomenal narration aside (which is seriously too good to be taking on drivelous books like this) it's balanced out with the same hypnotically repeated buzz words and propoganda that we hear all day on NPR.
So despite the mild paranoia, anxiety, and occasional sleepless nights brought about by the idea that everyone you don't like could be a radical neo nazi in the making, it also uses mind numbing assertions reminiscent of the headlines at Media Matters and deserving of the CIA's MKULTRA Awards and should take home the prize for this year's Project Mockingbird category!
By using familiar words that are both reaffirming to everything you think you know without ever having to challenge or expound upon the basis of that knowledge, the words emerge from the mind and pen of the author and are hypnotically planted in the brain. Leaving your state of critical thinking in a Terry Shivo state of bliss. Thus, the title of this review. If ignorance is bliss, then the author has ascended to Nirvana.
Which might explain why they didn't, you know, take the time to actually learn about the proud boys from actual proud boys or getting to know them. And in fact, I'd be surprised if they ever learned anything about the proud boys from anybody that didn't already HATE the proud boys.

Narrator seriously nailed it though!

A good summary of the alt-right

A concise review of the alt-right culture and its impact on society. Easy listen. Headphones recommended in work settings. Lots of triggering content.

A decent intro to the concept of the ethno-state and the far-right organization that sprout out from it. The book covers a lot of recent far-right activity in a clear and concise fashion considering the subjects are slippery, and have few formal structures.

The narration is flawed by unnecessarily quickened speech, garbled pronunciation, strained voice, I’ll-timed breaths, and lack of familiarity with words and phrases having specialized meanings (e.g., deconstructionism).this reading is simply beyond the narrator’s reach. She mumbles names, which she should have learned how to pronounce before tackling this reading. Neither does she pronounce correctly sophisticated vocabulary.

It is difficult to follow this story, the story of how extremist conservatives have gained so many adherents. Obviously this an alarming phenomenon requiring scrutiny if we are to arrest its pernicious effects. We only need reflect on JANUARY 6 to know that.

However, obtaining that understanding is hampered by much less than optimal narration.

The subject matter delves into a lot of complicated detail. The narration is poor. I don’t think the narrator truly understood what she was reading.

A Siren Call To Arms Against A Racist Dictatorship

I learned than I thought that I would about the Evil, Insanity and True Danger of Trump and the Alt-Right

I will admit, I was duped. Excited to get an historian’s perspective on the Proud Boys, I purchased both the Audible version of Stern’s book as well as a hard copy. Yet, for a book titled “Proud Boys and the White Ethnostate”, the phrase “Proud Boys” is mentioned 34 times, 31 of those on pages 71-76. Stern calls herself an historian/activist but it is clear she is writing with her activist’s hand. The book amounts to a polemical attempt by Henny Penny to build a towering straw man out of three and four syllable words that any editor worth his or her salt would have bled all over in the first draft. Stern covers some of the scariest, albeit fringe, aspects of white supremacy’s esoteric underpinnings, portraying them as basic Alt-Right beliefs. If you are interested in scholarship on this topic see Nicholas Goodrick-Clarke’s “Black Sun - Aryan Cults, Esoteric Nazism, and the Politics of Identity”, which Stern references - or any number of academic articles available online in various journals dedicated to the subject. For information on the Proud Boys, look elsewhere. The narrator was good.

An important book, not only for americans but also for europeans. Read it in one setting. Makes you aware how rasism and fasism can hide.

This is essential reading for anyone worried about the rise of the alt-right. The author illuminates the dark corners of the radical right exposing their sources and methods.