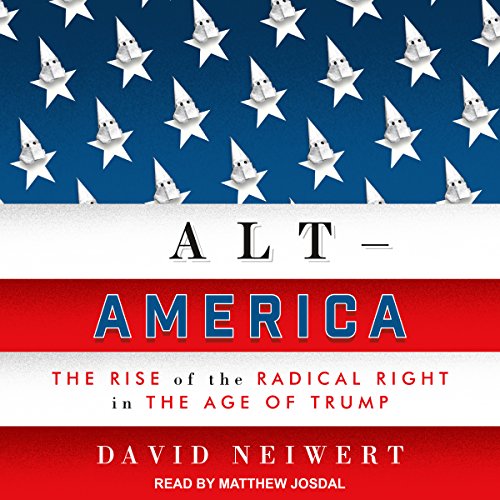 By: David Neiwert
Narrated by: Matthew Josdal
Try for £0.00

Just as Donald Trump's victorious campaign for the US presidency shocked the world, the seemingly sudden national prominence of white supremacists, xenophobes, militia leaders, and mysterious "alt-right" figures mystifies many. But the American extreme right has been growing steadily in number and influence since the 1990s with the rise of patriot militias.

Following 9/11, conspiracy theorists found fresh life; and in virulent reaction to the first black US president, militant racists have come out of the woodwork. Nurtured by a powerful right-wing media sector in radio, TV, and online, the far right, Tea Party movement conservatives, and Republican activists found common ground. Figures such as Stephen Bannon, Milo Yiannopoulos, and Alex Jones, once rightly dismissed as cranks, now haunt the reports of mainstream journalism.

Investigative reporter David Neiwert has been tracking extremists for more than two decades. In Alt-America, he provides a deeply researched and authoritative report on the growth of fascism and far-right terrorism, the violence of which in the last decade has surpassed anything inspired by Islamist or other ideologies in the United States.

“The seemingly sudden reemergence of the far right in America has left many in a state of panic and bewilderment. Alt-America will be essential in helping us to comprehend the depth of its foundations in national life." (Angela Nagle, author of Kill All Normies)

What listeners say about Alt-America

Compelling and thorough. A great read for our time. Genuinely felt like my perceptions had been challenged and mind broadened.

Fascinating, comprehensive taxonomy of US FarRight

Would you listen to Alt-America again? Why?

I would listen again, due to the sheer level of detail contained in Neiwert's reporting. It is a fascinating read that I may read again for leisure but definitely will return to for reference.

Have you listened to any of Matthew Josdal’s other performances? How does this one compare?

No, this one was fairly good, although it took a while to get used to his voice.

amazing. I want to recommend it to everyone.

Everyone should read this. It is the firstexplanation for Trump that I've read that actually seems to explain it to me in a way that rings true and survives the fact checking. It leaves you with how you can work to fix this as well. A lot of stuff I've been reading just explains it somewhat then never gives you anything to do with your knowledge. This is different it is well constructed and well researched. This book is so much better then the other ones I've been reading about the Trump campaign and how he won. I couldn't agree more with the afterward.

This is a thorough and concise look into the alt right and it's ties to Trump and it's effect on the current political climate. it's accessible to readers of every background and it's easy to fact check. Read all the way until the end. It can be very intense though, descriptions of terrifying situations, really aggressive online quotes and violence. Completely necessary, very important, but shocking in their reality. This is your warning.

if you're like 99% of Americans who was asking the cosmos "what the fuck?" on November 9th pf 2016, this book may just provide you with the insight that reveals what we are truly up against in the political arena. Don't listen to this unless you are ready and willing to take a stand for whats right with America and whats wrong witb the right.

Slightly stilted and robotic narration marrs an otherwise well written and fact-dense work. Many chapters required a restart as the narrator's choice of tone caused the narration to become indistinguishable and difficult to focus on.

I wanted to listen to this book as I am very interested in the subject. Sadly, the narration is one of the worst I have heard. The narrator is robotic and monotone - there is no distinguishable rhythm or dynamic rise and fall. If I were David Neiwert, I would complain to the company that hired Matthew Josdal. I could not even make it through the first chapter.

DISCLAIMER I only got the Chapter 5, or about 1/3 of the book, and I’m not likely to get further.

I got this book wanting to learn more about the underpinnings of the alt-right movement. The historic events and motivations that explain or at least illuminate how a significant number of people, who broadly speaking share the same DNA for intelligence and rational thinking as myself, are mislead by sensationalist like Alex Jones, blatant bigots like David Duke, and outrage opinion peddlers as Hannity and Limbaugh. However, no such rational explanation for either the rise of these people as leaders or the millions of sympathetic listeners that give them oxygen emerges.

On the contrary, through chapter 5, there is little but recounting many of the worse crimes of bigotry & prejudice. While I have no doubt of the truthfulness of the incidents recounted, the failure to extract broader context do not give me much hope that the author is moving toward uncovering the underpinnings I was looking for.

I Scariest book I've ever read.

This book is about the person who denies its content.
Read it end to end.

Wow is all I can really say. I am constantly reading a book and have read at least 55-60 books so far this year and it's no exaggeration to say that this may be the best book I've read all year and possibly the best book I've ever read. Unbelievable!!!

Despite its release date of 2017, it is NOW even more poignant than ever ... I now know what it means to be “woke” and Red Pilled.

It's awesome! A great resource for understanding the history and methods of far right extremists

Oof. America is in trouble.

if some one's political goal is to take away the rights of other people, then they don't love freedom and cannot claim celebrate liberty.

The right has been creeping towards this sort of authoritarianism for a long time-- and this book demonstrates it clearly.

Most of the biggest conspiracy theories appear traceable to John Birch Society garbage.

we need media accountability to de-radicalize the right before its too late.