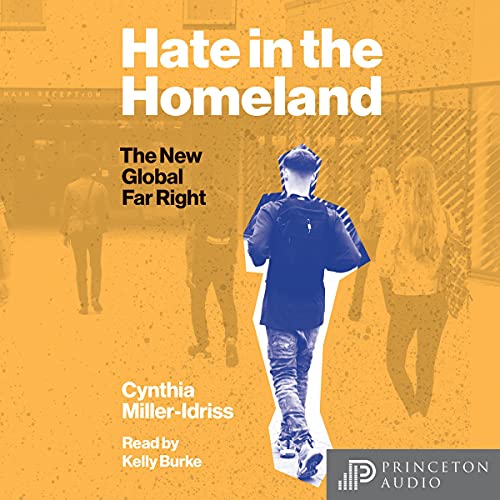 Hate in the Homeland

By: Cynthia Miller-Idriss
Narrated by: Kelly Burke
Try for £0.00

Hate crimes. Misinformation and conspiracy theories. Foiled white-supremacist plots. The signs of growing far-right extremism are all around us, and communities across America and around the globe are struggling to understand how so many people are being radicalized and why they are increasingly attracted to violent movements. Hate in the Homeland shows how tomorrow's far-right nationalists are being recruited in surprising places, from college campuses and mixed martial arts gyms to clothing stores, online gaming chat rooms, and YouTube cooking channels.

Instead of focusing on the how and why of far-right radicalization, Cynthia Miller-Idriss seeks answers in the physical and virtual spaces where hate is cultivated. Where does the far right do its recruiting? When do young people encounter extremist messaging in their everyday lives? Miller-Idriss shows how far-right groups are swelling their ranks and developing their cultural, intellectual, and financial capacities in a variety of mainstream settings. She demonstrates how young people on the margins of our communities are targeted in these settings, and how the path to radicalization is a nuanced process of moving in and out of far-right scenes throughout adolescence and adulthood.

Hate in the Homeland is essential for understanding the tactics and underlying ideas of modern far-right extremism. This eye-opening book takes listeners into the mainstream places and spaces where today's far right is engaging and ensnaring young people, and reveals innovative strategies we can use to combat extremist radicalization.

"In Hate in the Homeland Cynthia Miller-Idriss describes how ideas once limited to extremist circles, such as that of a 'demographic replacement' - whereby American citizens will be overrun - are now promoted by mainstream figures such as Tucker Carlson and Laura Ingraham of Fox News." (The Economist)

"Highly original. Miller-Idriss argues that we must understand the mainstreaming of the far right in its specific spaces, in particular those spaces where youths will encounter the far right. She shows how the far right pushes boundaries and attracts youths, slowly but steadily radicalizing them and drawing them in further." (Cas Mudde, author of The Far Right Today)

"A timely book that calls for vigilance against extremism in hitherto unexpected corners, online and off." (Kirkus Reviews)

What listeners say about Hate in the Homeland

Must read for Americans in these chaotic times. This book provides valuable insight into how radicalization makes it's way from the fringe to everyday life. The author provides real life examples of how other countries have combated radicalization. It takes each and every one of us to know the signs and how to address them. Read this - it's worth your time--we don't have to live like this.

Our race is the Master Race. we are divine gods on this planet. We are as different from the inferior races as they are from insects.... Other races are beasts and animals, cattle at best. Our destiny is to rule over the inferior races. The masses will lick our feet and serve us as our slaves"

They cry out in pain even as they strike you

as a far right researcher she touched on many things I had questions about and really helped expand my thinking. Great job!