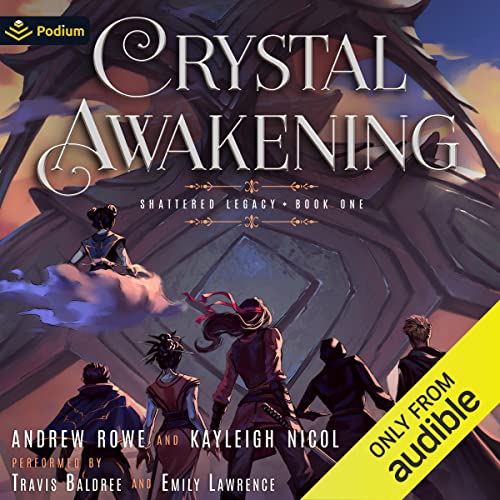 A team of adventurers enters an epic trial of wits, magic, and monsters in this thrilling new fantasy series set within the Arcane Ascension universe.

Parties attempting to claim the treasures of the Tortoise Spire of Dalenos are usually composed of six professional climbers. But following a near-disastrous climb, Team Guiding Star Legacy finds itself two challengers short. With Nieve as the frontline fighter, Sage as the strategist, Lani as the healer, and Emiko as the spellcaster, they need a couple powerful allies to round out the squad.

The first new recruit, Hane, is a fighting and stealth specialist, while the second, Aldis, has quite the talent for teleportation magic. Though their individual reasons for scaling the spire vary—wealth, fame, favor—the team’s shared goal is thus: fight, win, ascend, and repeat. All in the hopes of one day making it to the top, where the goddess awaits to grant them the objects of their deepest desires.

To achieve this goal, they must master escalating levels of fire and ice, dangerous creatures, and confounding illusions. Whether facing a threat to their bodies, their magic, or their minds, each of the climbers accepts the risks. And bending the rules is part of the challenge. Some call this cheating; others call it winning.

But no test is ever straightforward. Because Guiding Star Legacy is being judged, and their next contest is one they aren’t meant to survive. Ascend or fall, the quest is only just beginning.

What listeners say about Crystal Awakening

i personally find annoying how much the female narrator intakes breath. and her voice dont change much when voicing two diffrent peopple.

Travis did good job, as always.

When they started correcting each others pronouns, I stopped listening. I’m just getting bored of this ‘woke’ agenda

Narration was good, would have been better if each took specific characters but overall a great start to a series. Not a great place to start in this world but a great cast of characters that I got invested with and punched in the gut by in the end. Hoping for more in this series

Loved it!! Great start to a new series.

I really hope there's a cross over with the Arcane Ascension series. Good narration and pace.

Cracking Book - what was needed

proper tower climb story that I've been looking forward too.

While still an enjoyable story, especially if you are a fan of the overarching law and other series, this was the hardest audiobook to get through. A large part of this for me was the two narrator and the decision to shift back and forth between perspectives. It was very jarring and destroyed the emersion. Regarding the narrative this was generally okay, but a bit preachy at times.

Overall worth the credit if your a fan of Rowe, but not a place to start.

story and voice acting were good, enjoyed the book and look forward to the next one.

The story is meh, nowhere near Andrew Rowe’s normal level.

But having two narrators jives it a very disjointed feel.

Memorable Characters! Clever Puzzles! Interesting Loot!
This fantastic adventure helps flesh out Andrew Rowe's world, although no prior experience is needed to start with this one.
I had so much fun with this book, even if parts yanked the floor out from beneath me!

Tries a little too hard. Slow and one dimensional, without the wit of the original.

Not up to the standard I’ve come to expect from Rowe. The back and forth narration makes it harder to follow and doesn’t add anything to the book. If it had a single narrator I may have finished it. The characters also seem so thin skinned and dysfunctional It’s hard to like any one them. With how immature they act compared to what I’ve come to expect from other citrine characters from other books I don’t know how they made it this far.

I Just couldn’t get pulled in to this one like I have his other books.

I like both narrators. But they was no need to have two unless they only read specific characters.

Not a good effort from Andrew Rowe

I really wanted to like this book, but the characters are so dysfunctional they are difficult to care about. I found myself wishing a trap would eat them and end their pain.

Not as long as a typical Andrew Rowe book, and that's a good thing. Even the characters who like each other tend to nit pick and act mistrustful.

For me, this is a basic rule: "People like to be around people they like." This book has a party of 5 people, only two of which aren't thin-skinned, easily offended people that I just don't like being around. Even the good characters are... just off, somehow.

Narrators switch every chapter, very annoying and immersion-breaking. Either would have been fine on their own.

Much of this story feels like filler - you could cut out half of this book, and it would not be worse for it. Characters feel monotone, which is a problem since this book is hyper focused on inter-party social dynamics.

Ending is good, that's about it though. Was a struggle to get there.

I’ve really enjoyed Andrew Rowe’s books. But the author of this book is Kayleigh Nicol, though the book is set in Rowe’s universe. It’s a slog. 6 different characters, some hard to like, 2 different narrators read the same characters very differently, and several of the characters use the pronoun they, which often makes it confusing whether the sentence is referring to one character or two. And basically the whole book is this one group battling through 2 floors of a temple, with lots of whining and sniping. A tedious read.

Love Andrew Rowe books, but Emily Lawrence ruins the book for me. I cant get past the third chapter. The change in voices is just plain bad. You get used to someone sounding a certain way and the next chapter their voice goes from male to female. Travis does his normal great job. Emily is just to dry cant find a personality in her voice its just one long ramble. Sorry and hate to tell someone that their hard work is bad, but thats my opinion.

I love this book. I hate the "they" when talking about a single person. I always think that the character has some person with him or a pet that he has. I understand that making "they" part of the story gives it more depth, but it sucks to listen to. Hopefully other authors don't do the same with there own books.

This is my 2nd fantasy novel (of over 300) I couldn't finish and the first time it was so disappointing that I'd take the time to leave a review. I am usually a fan of Rowe but this was by far his worst. I found my mind wondering frequently because the characters are completely unrelatable. There was no character development, no back story, and not a ton of effort in the plot. It seems like he was too busy trying to include every type of character instead of creating an entertaining fantasy novel.

the narration of this book is horrible, narrators themselves are good but they narrate every other chapter so there is no way to match a voice with a character and just confusing.

the team climbing the tower is just also not very interesting, childish, inorganic and immature is what comes to mind when listening to their conversations.

Dry characters and performers. the charcters are small so small and petty. Poor entry by rowe. No continuity in pronunciations between books, stupid little things that spoil it for loyal readers. massive stepback in the quality of narration from pervious entries.

A weaker than usual showing from Andrew

Let's begin with the positive, I'm a huge fan of Andrew Rowe's world building and so I once again enjoyed exploring the world filled with spires built by an uncaring goddess. However this particular entry is far inferior to Sufficiently Advanced Magic.

Characters:
I could never begin to care about this set of adventurers. Their group dynamic was very toxic and made me wonder why any of them continued to be around each other. Additionally I had to continually refresh my suspension of disbelief as the people around them continued to act as though our group were veteran climbers with impressive records. Since throughout the book characters would constantly freeze up if they had a hint of one of their friends being in danger, it made me wonder how they even survived the judgements let alone climbing to any significant height. If a party member wasn't freezing up, they were criminally reckless.

I wouldn't normally harp on a specific character's moral beliefs as characters should have a variety of beliefs in order to appear real, however as the book seems to treat this one character's stance as moral truth I feel the need to bring it up. One of the characters has an addiction to gambling, they unsurprisingly are defensive about it and clash with other characters about it. This isn't the problem. The problem is that the character claims that their gambling effects no one but themselves and isn't anyone else's business, while the book likens the other characters attempting to help her with this to a person magically altering another person against their will and using them like a tool. It's fine for a character to hold such a juvenile and selfish moral position, however I find it distasteful for their stance to be treated as correct. Addiction does NOT just affect the person who has it. Even in the book, the character's addiction was a source of constant worry and anxiety for the people who ostensibly cared for her. And attempting to convince someone who is addicted to get help is NOT equivalent to magical rape.

Story:
It was very slow to pick up. Normally Andrew's books fly by for me, but this one dragged on despite it's shorter length. I imagine it's likely due to the weak characters and my constantly being jarred out of the story by the apparent disconnect between how the characters were being described and what their actions implied.

Overall:
I wouldn't recommend this book unless you really just to explore the world a bit more, and if you're thinking of starting here DON'T. Go pick up Sufficiently Advanced Magic instead.