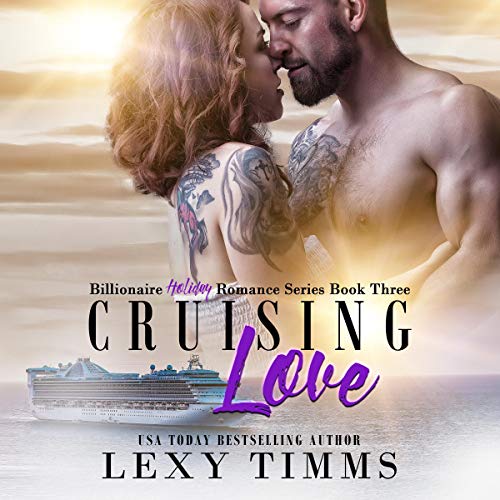 By: Lexy Timms
Narrated by: Brian Martin,Melina Schein
Try for £0.00

USA Today best-selling author Lexy Timms shares a holiday romance that’ll warm the heart and having you wishing on love - or beating it with a stick!

After all she’s pretty sure she’s in love with Colin. I mean, who wouldn’t be? He’s crazy hot, owns a billion-dollar company, and wants to marry her.

Except there’s one problem - they barely know each other. They’ve done two crazy snow drives and had amazing sex. Boy does he know her in that department. He even hired her to work for his company. But what else do they have in common? Is that enough reasons to get married?

Of course there’s the issue of him being in a different social class. Literally. The man deals with top business owners, billionaires, Hollywood, princes from other countries. He’s spoken to the president! Abby’s just...well, she’s just Abby from a small town near Minnesota.

As they head off on a cruise she starts to wonder. With so many differences can they even make it to the altar?

A holiday romance series because every holiday is special.

What listeners say about Cruising Love

We meet Abby and Colin. Working for and getting to Colin, but have the nasty ex . Is causing problems
A great story.

Really enjoyed this series and the way the main characters interacted with each other. This book had me breaking out laughing thru the whole book. Very good read!

Cruising Love, an Audiobook by Lexy Timms is book 3 in the Billionaire Holiday Romance series. It is the story of Colin and Abby. Her boyfriend left her, stole her money, and left her hanging. Now, she’s getting ready to marry her love, Colin. She works for him as a PR rep. But, her ex is causing issues…and threats. There are so many obstacles, doubts, and issues that are preventing these two from their plans…what will happen???

This story was very well-narrated by Brian Martin and Melina Schein. They do a great job of interpreting the characters and make the story even better!!!!

I am volunteering to leave a review for an Advance Reader Copy of this Audiobook.

What's not to like about Colin and Abby? Colin Murphey and Abigail Thompson are newly engaged, living in Los Angeles and Abby's got a new job as Colin's public relations rep. She should be happy, shouldn't she? Colin's ecstatic and can't wait to get married. But there's something off about Abby. She doesn't feel comfortable living with Colin in his penthouse, so she gets her own apartment. Is it her freedom she's missing? Does she feel rushed? She doesn't really know because she hasn't taken much time to think about it. Heck, they've only known each other for about one minute! She obsesses too much about it and, when she calls her mother for support, her mom does what every good mom should do and tells her to "grow up!" The first person to tell her that marriage is work, non-stop work, and she'd better learn to communicate with Colin. She tries but there's trouble right around the corner. Her ex is back to make her life hell by lawyering up to sue her for all she's worth. She's not worth much now, but as soon as she marries Colin, she'll have access to millions. Colin makes a supremely unwise decision when he finds out what her ex is up to by not telling her what's happening. He pays him off with no mention to Abby that he's even in town. To say that it drives a wedge between them is an understatement. Abby doesn't know if she wants to be with him anymore. How did their sweet love get to this point? When Colin comes up with a plan to allow them to get to know each other from the very beginning, she finally grabs the chance and off on a cruise they go. Just when everything was going so beautifully and their love was palpable again, the difference between them and their lives comes flashing right in front of them...the paparazzi found them and are indiscriminately snapping pictures and shouting in their faces. Abby has never felt so unequal before and worries that the difference in their social classes won't be overcome. I really wanted to grab her by the shoulders, shake ever so slightly, and repeat her mother's words, GROW UP! At their dinner table on the ship, Abby and Colin had the pleasure and good fortune of meeting an elderly couple whose love has spanned decades. They were guardian angels who taught Colin and Abby the most important lesson of loving each other. Never give up, always keep working to make your marriage even better and, no matter what, be the support your spouse needs. Their wedding and reception were both beautiful occasions and getting to know Colin's mother was a joy. The ending was perfect for this couple, whose journey was anything but smooth, as they finally found their HEA. Brian Martin and Melina Schein do a marvelous job with the narration. Their voices are well-modulated and laced with emotion and character. The story comes alive as they speak.